2019 was a heck of a year to be a Toronto Raptors fan. Having long-suffered through decades of putrid basketball, it was cathartic to finally watch the team climb to the top of the mountain. Long after the victory parade and the Fun Guy deciding to go home, we’re still celebrating.

Thanks to my cousin Jeff – who is the producer of the excellent Toronto Raptors docuseries Open Gym – our family got the opportunity to get our hands on the NBA championship trophy. Pinch me?

Having booked the trophy for the day, Jeff invited the family over to his house to see the coveted Larry O’Brien trophy. As we entered his home, the trophy was sitting on a table in their dining room. The same trophy that basketball royalty have held, such as Michael Jordan, Kobe Bryant, and Lebron James was on the same table where Jeff’s family eats dinner. How surreal is that?! My cousin Adrienne provided the white backdrop so we could all take more professional-looking photos if we wanted to.

Our first shot with it was with Steff and I posing with championship rings. She wore mine, while I wore Jeff’s. In hindsight, I should have shown the side that had our family name on it. Nevertheless, great photo! Having just celebrated our 12-year anniversary together, this was one heck of a way to kick off year 13!

Even as a basketball junkie, this is an angle of the trophy that most don’t see. At the base is an inscription of the NBA logo and the the text “The Larry O’Brien Trophy”. Underneath the base is a layer of felt so that it won’t slip off of surfaces, though I didn’t take any pictures of that. 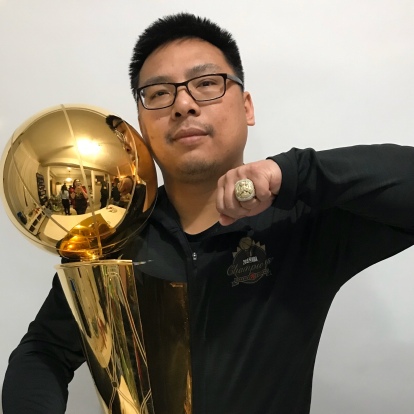 Unlike at public events where us common folk aren’t allowed to touch the trophy at all, we were given the opportunity here to touch and even carry the trophy. We had to do it with gloves, but I wasn’t too concerned about that. By the end, I got a little more adventurous. Holding it up with two hands, I took one glove off mid-grip and slipped on my ring for this awesome shot of me holding all the championship bling. Outside of In Third Person, this is now my profile pic on everything. 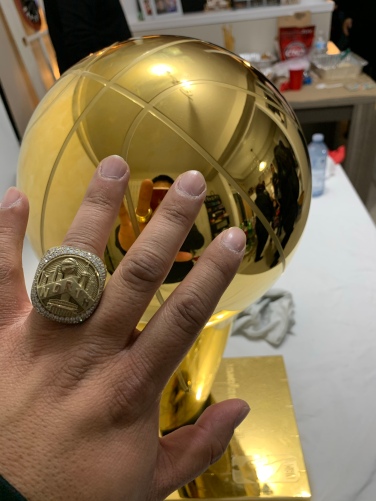 Again, not allowed to touch it with bare hands. However, I did try and get as close as I could while also showing off the championship ring that Steff got me for Christmas.

Of course I had to go for the shot of me kissing the trophy. Didn’t make contact, but I love how goofy my face looks in it. If you haven’t already noticed, the trophy is extremely reflective. Look again at the basketball part of the trophy to see the photographer and everything else happening in the room. 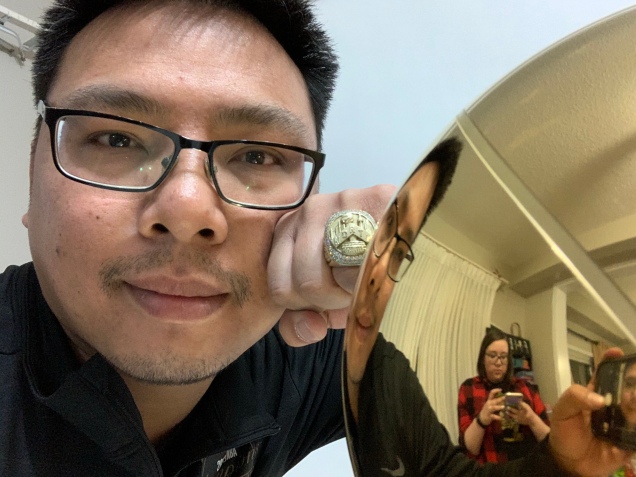 But first…let me take a selfie!

Oh, and one more with the fam using the reflection of the trophy!

Thank you to Toronto Raptors for being the best basketball team in 2019 and bringing this wonderful piece of hardware north of the border. Thank you to my cousin Jeff and MSLE for letting Jeff literally bring the trophy home. And thanks again Jeff for inviting the whole family to share in this moment! This was truly a once-in-a-lifetime experience and I’ll forever be grateful for the opportunity to spend some quality time with Larry OB.

Now let’s do this again in 2020 when the Toronto Raptors go back-to-back. 😉