Following up on the success of the original, DC Comics Deck-Building Game: Heroes Unite is a stand-alone game that is fully compatible with is predecessor. While the core gameplay is the same, this set contains new character cards and a new main deck; all of which have new abilities. For newcomers, is this the version you should start with? And for those who already own the original, is this worth adding to your collection?

In Heroes United, players assume the role of one DC Comics hero. In this version, you can choose from Nightwing, Batgirl, Booster Gold, Hawkman, Shazam, Black Canary and Red Tornado. I don’t blame you if you don’t recognize most of this cast, as DC clearly used up all of their A-list characters such as Superman and Batman in the first game. If you own the original, you can bring them over, though you’re kind of screwed if you just get Heroes Unite and want to play with the heavy hitters. From a gameplay perspective, these cards work fine, as their abilities add new elements to the game. Having said that, the distinct lack of star-power makes this a far less attractive proposition. Really, who is chomping at the bit to play as Black Canary, Red Tornado or Booster Gold? 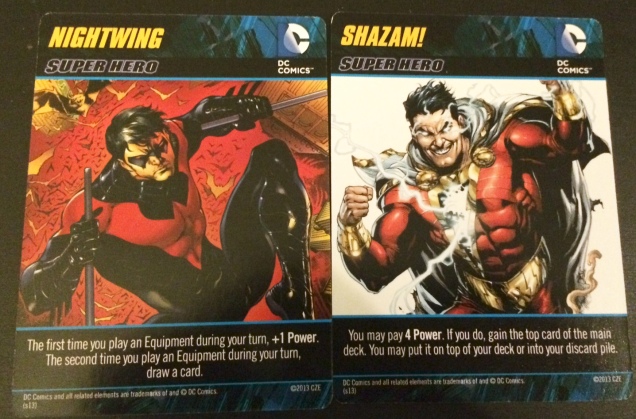 Once roles have been assigned, players build their decks by purchasing cards from the line-up. Each card possesses unique abilities that give you more power, draw more cards or other benefits. Certain cards can also hurt opposing players. Ultimately, you want to build a hand that’s strong enough to defeat the super-villains. The act of building a deck and using those cards to defeat bad guys is fun and accessible by being simpler to learn than something like Dominion. It’s also good to see that all of the cards have new traits, which helps differentiate the game in some ways.

However, my thematic problems with the original game still persist here. It makes no sense as to why superheroes would want to hurt each other, nor why defeated super-villains would help you take out other super-villains. Furthermore, the lack of recognizable characters is also a problem here. Do you really want to recruit Granny Goodness into your deck? Or how about defeating Nekron, Mongul or Amazo? Even now, as someone who has gotten heavily invested in the world of comic books within the last year, the source material they draw from to make this game happen is really indicative of DC and Cryptozoic scraping the bottom of the barrel. 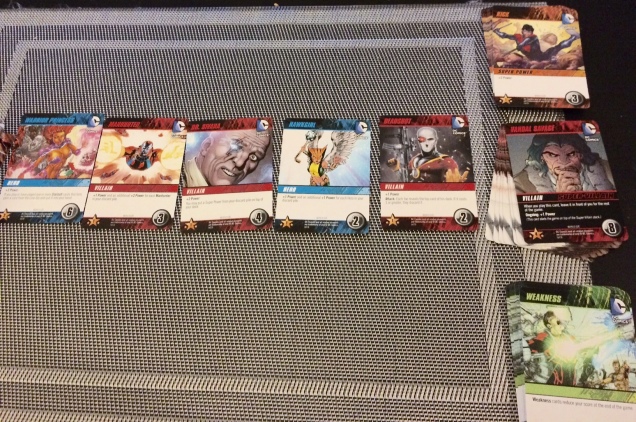 If you love the original and are craving more content, DC Comics Deck-Building Game: Heroes Unit makes for a decent expansion. Assuming you aren’t turned off by the lack of star-power, you’ll get a lot of new cards and abilities to mess with. Having said that, the shortage of household names is a huge drawback, as the appeal of playing as DC Comics superheroes taking on DC Comics super-villains is a moot point when everyone involved is B-list and below. Because of this, most are likely to get more out of the first game than this new edition.