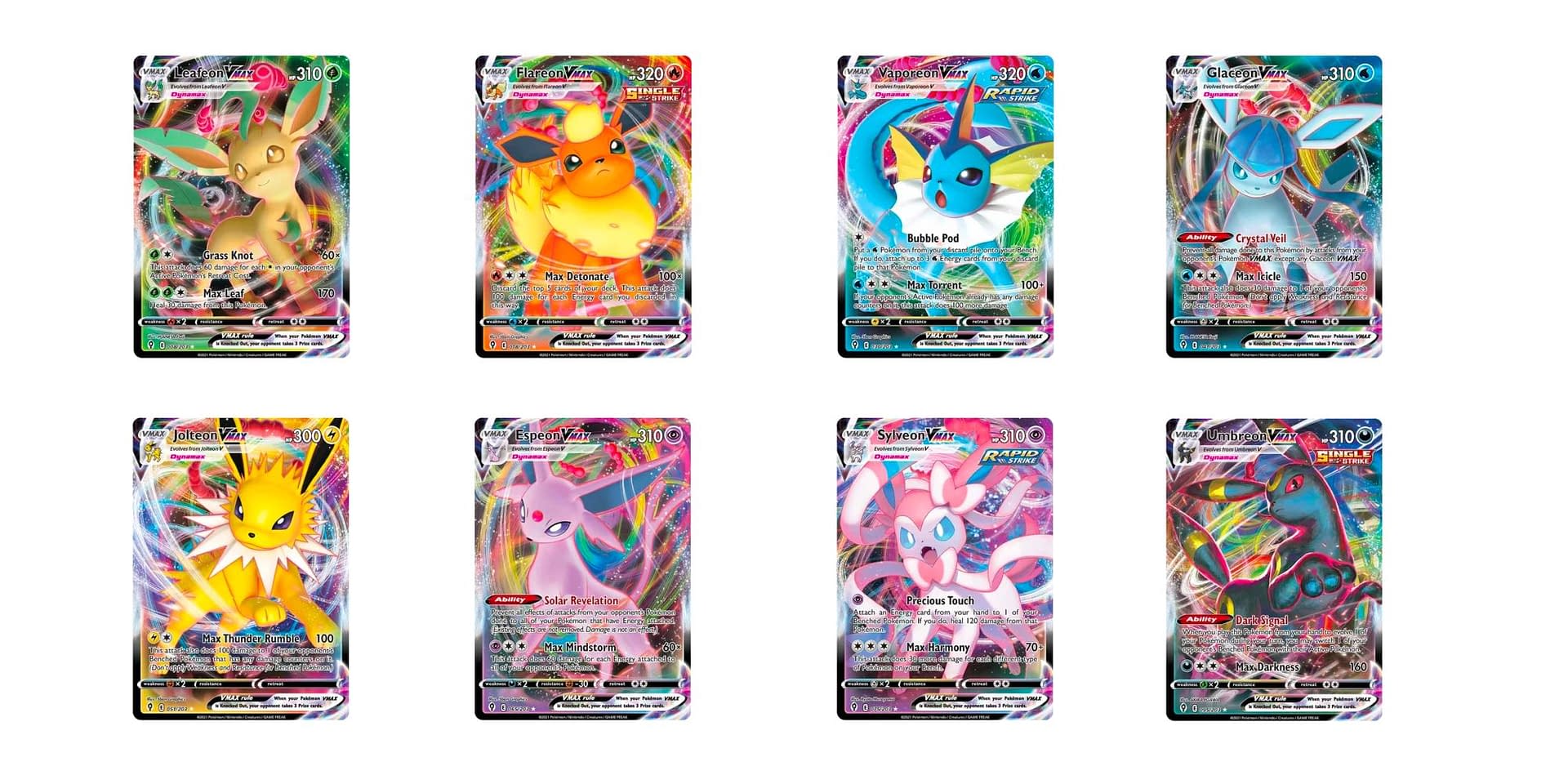 Based on my experience playing with and against them, here are my rankings from worst-to-best! 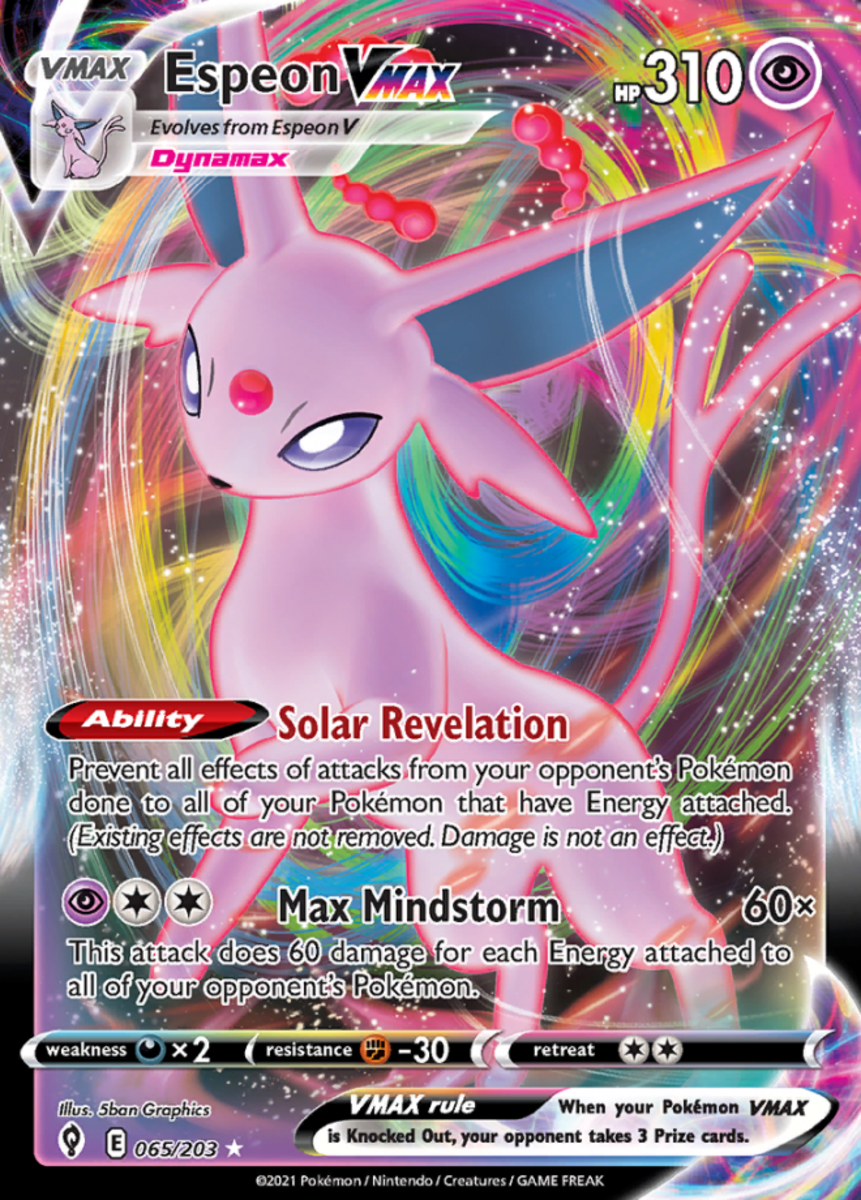 At best, Espeon VMAX is a one-off tech card in something like the Shadow Rider Calyrex deck. Its Max Mindstorm move does 60 damage for for each energy attached to all of your opponent’s Pokemon, but it’s slow to charge and most decks aren’t going to have enough energy in play for this to matter in most matches. Even as a one-off in the Shadow Rider deck, you’re probably just better off using Alcremie VMAX instead, which hits based on the number of energy you have in play. If it’s any consolation, the Espeon VMAX alternate art card arguably the best of the bunch from a collector’s standpoint. 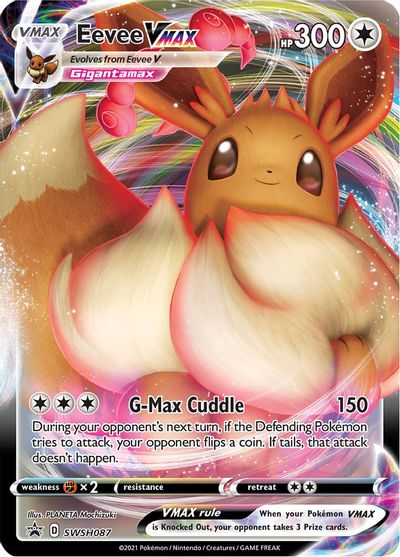 Despite the name of its attack, G-Max Cuddle is a bit more dangerous than it sounds. For three colourless energy, it hits for 150 damage. On your opponent’s next turn, they have to flip a coin when they attack. If tails, the attack doesn’t happen. While its damage is underwhelming, you might win a game or two simply from your opponent flipping tails a few too many times.

Even if this is possible in theory, its low damage and inherent inconsistency make it a meme at the very peak of its powers. 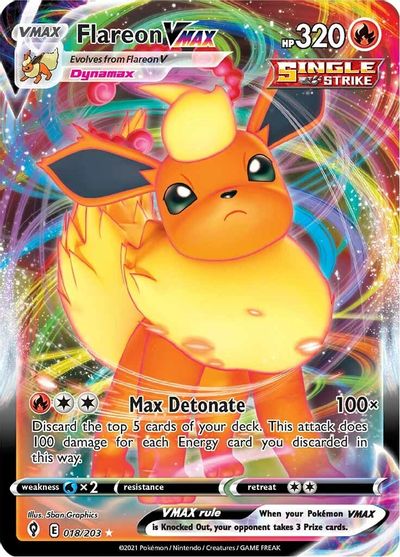 Unlike Eevee, Flareon VMAX confidently lives in meme deck territory. While its Max Detonate move has the potential to one-hit KO any Pokemon in the game, its high cost and the deck-building limitations that come with having to stack your deck with energies make it an unreliable strategy most of the time. That said, I’ve been on the wrong end of a Flareon deck when it’s cooking and it sucks. Also, with the Magma Basin stadium coming to the game as part of Brilliant Stars, Flareon might be a bit more viable in the future.

I really tried to make Glaceon VMAX work. I have a full set in the online version of the game and it frequently comes up short. Crystal Veil as an ability allows it to block all attacks from VMAX Pokemon, which will instantly win you games against certain decks. However, between gusting effects like Boss’s Orders and Path to the Peak, its not as reliable of a wall as one would hope. 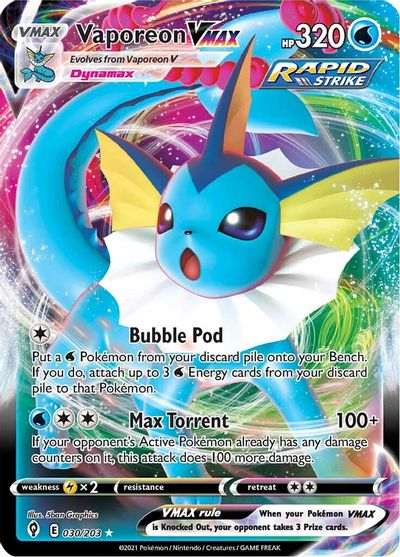 One of the original Eeveelutions might be a bit underrated. Max Torrent normally does 100 damage, but can hit for 200 if the target already has damage counters on it. Three energy is a bit steep, but Rapid Strike Energy cuts the number of energy attachments required down to two. 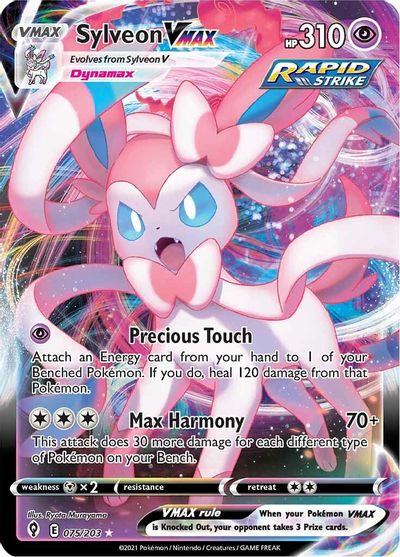 Teamwork makes the dream work with Sylveon VMAX! Max Harmony hits for 70 damage plus an additional 30 for each type of Pokemon on your bench. If you have a bench full of unique types, Sylveon VMAX can hit for up to 220 damage. Better yet, if you stack your deck with strong Rapid Strike Pokemon, you can theoretically build a deck that has type advantage against everything! 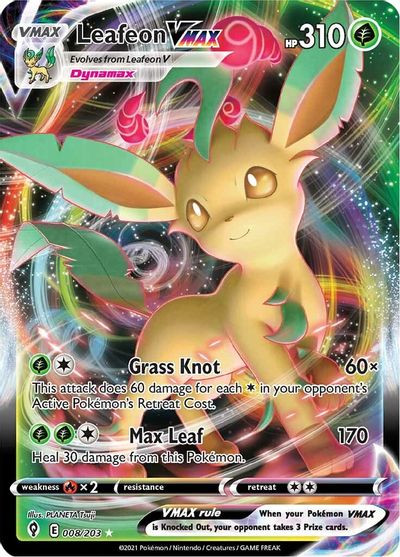 A personal fave of mine, Leafeon VMAX punishes heavy Pokemon with its Grass Knot move. Hitting for 60 damage times the opposing Pokemon’s retreat cost, Leafeon can hit way harder when the Galar Mine stadium is in play, increasing everyone’s retreat cost by two. Leafeon may struggle against lightweight Pokemon like Mew VMAX, but its going to be a fierce opponent and an incredibly consistent attacker. 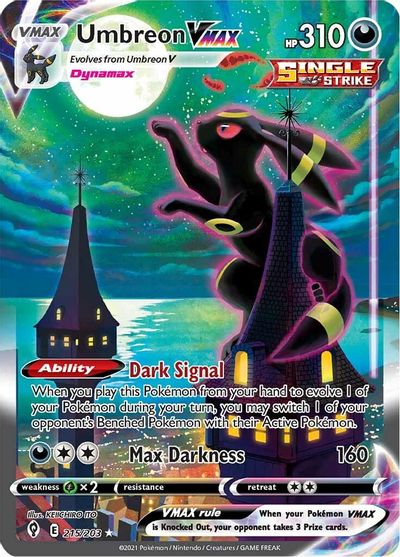 Out of all the Eeveelution VMAX Pokemon, Umbreon VMAX has the best ability. Even when it’s on the bench, its Dark Signal ability is a game-changer. When you evolve to Umbreon VMAX, you can use Dark Signal to gust an opposing bench Pokemon into the active. Whether you use it to set up a massive knockout or stall for time.

Most use Umbreon for its ability, but it works as a solid attacker. Since Umbreon is a Single Strike Pokemon, you can cover its energy cost pretty easily with Houndoom on the bench. Better yet, by boosting its damage potential with Single Strike energy, Umbreon has the potential to one-hit KO almost every Pokemon V in the game. 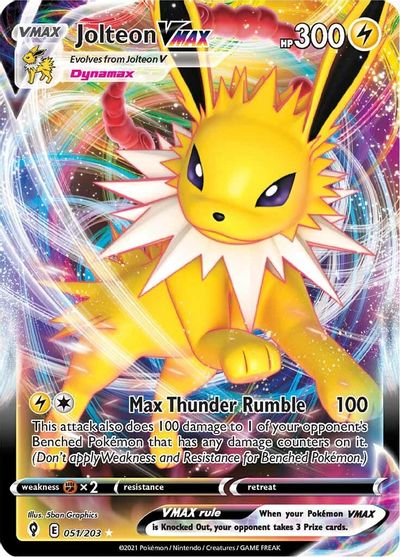 Jolteon isn’t just the best Eeveelution VMAX, it’s the star of one of the strongest decks in the game. Its Max Thunder Rumble allows it to hit for 100 damage to the active Pokemon and 100 to a bench Pokemon that already has damage counters on it. When paired with Galarian Zigzagoon and Inteleon, setting up spread attacks is incredibly easy to do. Better yet, when toting Elemental Badge, Jolteon only needs one energy to strike.

As of writing, most decks simply don’t have an answer for Jolteon hitting two targets for 100 damage apiece. But with the upcoming release of Brilliant Stars, a new Manaphy card comes equipped with the ability to block all bench damage. There are ways to work around it, such as by gusting Manaphy to the active, but it certainly will weaken Jolteon’s dominance. As a precedent, Rapid Strike Urshifu is another spread attacker that still did well even when Bench Barrier Mew was in rotation.

Odds are Jolteon will still be strong going forward. Is its spot at the top of my list already at risk though? Possibly.