Slavery in the 1800s is a sore spot of North American history. However, it was also a time when the tides turned thanks to the efforts of brave individuals who risked everything to abolish slavery. Freedom: The Underground Railroad is a co-operative board game in which players take on the role of the abolitionists trying to usher slaves out of the plantations and into the safety of Canadian soil while trying to drum up support for the Abolistionist movement. Of course, doing those won’t be easy, as Slave Catchers will try and intercept slaves before they get to Canada, while opposing people or events will stifle your progress in other ways.

Tackling this in any form is tricky due to the nature of the subject matter. Thankfully, Academy Games took great care in presenting the subject with respect and historical accuracy in mind. Oh yeah, it also turns out to be a great and challenging board game, too.

Before play begins, each player takes a role card. Each role provides its own unique set of benefits, such as the Stockholder who can raise money faster or the Conductor who has extra slave moves available to them. Each character also gets a one-time-use ability that’s really strong. However, once you burn it, most character’s regular abilities are weakened, so use wisely. Exploiting the strengths of each character while coordinating your actions with your teammates will be key. If you’ve played Pandemic before, the concept of unique character abilities is very similar. As for the game board itself, slave cubes start out in the plantation spaces, while more slave cubes are placed in the visible slave market cards. Also, Slave Catcher tokens are placed in their starting positions. They patrol the United States along set paths.

The game is played over the course of 8 rounds, with five phases within each round. Things start by rolling two Slave Catcher dice. These will determine which Slave Catcher moves and how far they’ll travel. If they land on a space that holds a slave cube or a group of slave cubes, the captured slaves are moved into the slave market. Depending on the roll you get, there may be instances where Slave Catchers hold their ground, which could be a good or bad thing depending on what you need.

Now it’s your turn to plan. On the left hand side of the board are tokens that you can acquire based on the current era. At the top are Support tokens that represent the growing support for the Abolitionist movement. By buying all of the Support tokens in one era, you’ll advance the progression of time and unlock the tokens and cards for the next era. You’ll eventually need to buy all three sets of support tokens in order to win the game. Below those are Conductor tokens that give you the ability to move slaves.  The bottom row contains Fundraising tokens. When used, these tokens will earn you money based on the number of slaves that appear on the map.

All three sets of tokens are critical to your success, though you’ll never be in a position to get everything you want in one turn. Players are only allowed to collect two tokens each, some tokens cost money, and most tokens are only for one-time use. Making sure that the right players get the right tokens at the right time is key. So far when I’ve played, I’ve been able to complete or come very close to completing the freed slaves winning condition, but consistently fall short of buying all of the support tokens. I guess I’ll need to study more and optimize my approach.

Next comes the Action phase, which is easily the most tense. One-by-one, players take turns activating their powers, raising funds and moving slaves from city-to-city. Most cities can only contain one slave cube at a time, though large cities can house four. If a slave moves into a city that is part of a Slave Catcher’s route, the Slave Catcher will move one city closer to the disturbance. At a certain point, the board is going to be arranged in a way where movement is going to guarantee that some slaves will get caught.

Yes, it sucks to think that you can’t save them all, but that’s the reality of the matter is that some slaves will get caught mo matter what you do. I hate to say it, but the trick to success is to know when to sacrifice some slaves to the Slave Catchers in order to create openings for a larger group to get through. 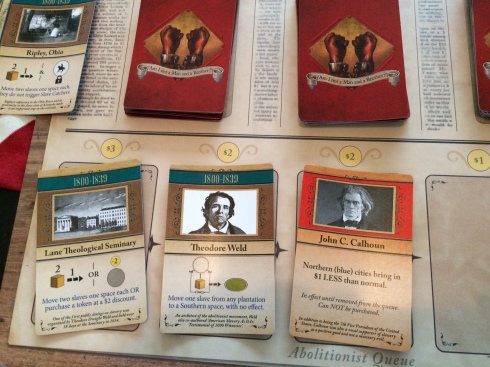 During the Action phase, you can also purchase a from the Abolitionist Queue. All of these cards are based on real-life people and events of the time. Most of these cards also impact the game in a way that makes sense within the context of the game. Some cards give you clear benefits, while Abolitionist Opposer cards actually add a negative affect to the game until you buy them. I find that these cards can be particularly helpful or devastating, depending on where in the queue they are and at what point the negative cards arrive.

After each player has completed their actions, slaves from the bottom Slave Market card are transferred into the plantations. What you’ll soon find out though is that the plantations get full really quick, but you’re going to have a hard time moving slaves out of there fast enough. If you run into a situation where Slave Market slaves can’t fit in the plantations, they are moved over to the Slaves Lost pile. If too many slaves are lost in this manner, you all lose.

Needless to say, this game is going to put up quite the challenge, though to its credit, a fascinating one. Between all of the resources you need to manage, the people you need to move, and the new supply of people coming in each round, there is a lot to think through. Also, because the theme of the game fits so perfectly with the mechanics, every decisions carries so much emotional weight with it. I want to save the slaves as much as anyone, so I really try my best to achieve victory. Admittedly, I have yet to actually succeed in doing so, as the game really is tough, but I’ll continue to crack at it in hopes of someday saving everyone. 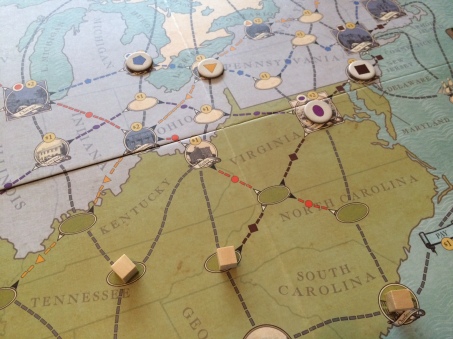 I had my doubts about Freedom: The Underground Railroad pulling off what it set to achieve, but it absolutely crushes my skepticism. This is a top-notch co-operative board game that takes a sensitive theme and marries it with the perfect board game mechanisms to create a deeply entertaining, strategic and emotionally heavy game. You can also play it as a teaching tool, as the cards and the manual are chalk-full of history from that era. Regardless of what you’re looking for out of this game, you’re probably going to get it in spades.