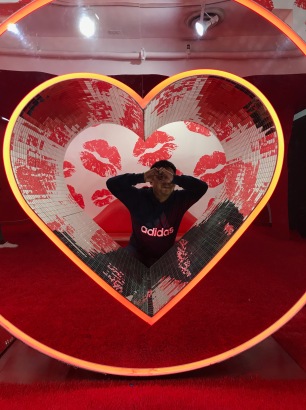 I don’t talk about this much here, but I’m the biggest sucker for love songs. Even before I got to an age where my voice started to change, they always struck a chord in my soul to the point where they might have actually had a negative effect on my development as an human being. To this day, I have sappy tendencies and love songs will always illicit a strong reaction from me.

Since today is Valentine’s Day, and I don’t feel like making gaming-related content to celebrate it, let’s talk about love songs instead! It was going to be a list of five, but I couldn’t help myself and I added a few more. Here are a few that always get me in my feelings!

“There is a light, that shines/Special for you and me”

I discovered this one through “The Light” by Common. His take on it is still my favourite hip-hop love song, but the original is such a beautiful track on its own. So much soul in his voice and his words, along with a jazzy instrumental that perfectly eases in and out of the song.

This became a favourite of my wife as well after I introduced her to “The Light” by Common. So much so, that on the night I proposed to her, this was the song playing on my phone when I got down on one knee and asked her to be with me forever. Even without the sentimental value, this is my all-time favourite love song.

Billy Joel’s “Uptown Girl” is probably my single favourite song of all-time, regardless of category. The doo-wop vibe was a throwback even when this song was first released in 1983, but it’s timelessly catchy. Furthermore, as someone who grew up in…less than ideal circumstances…I always identified with Billy Joel here as the downtown man. Compared to me, everyone was uptown. If I were to get locked in a cell and forced to listen to only one song for the rest of my life, this is it.

Childish Gambino – “So Into You” (Cover)

Tamia’s original version was so close to making this list. However, I have to go with Childish Gambino’s cover. Slowed down and jazzed up by Donald Glover, it’s a beautiful rendition of a song that really amplifies the meaning behind the original. Bonus points for this being Steff and I’s choice for our first dance song at our wedding.

I have a confession to make. I don’t like Bob Dylan’s music. I actually prefer listening to covers of “Make You Feel My Love” more than the original. But I have to tip my hat to him here. The poetry in Dylan’s words and music in this song are simply masterful. One of the greatest love songs ever written.

“You had a lot of crooks trying to steal your heart/Never really had luck, couldn’t never figure out how to love”

Lil’ Wayne is not one of my favourite artists, but he hit a grand slam with “How to Love”. Singing behind acoustic guitar chords, this is a heartbreaking song about a woman whose traumatizing upbringing has left her emotionally scarred. This one always strikes a nerve with me, even many years after its release. In fact, a one week stretch in 2018 saw me listen to this song on loop so much, it was my most played song on Spotify that year.

“If you’re lost, you can look and you will find me/time after time”

Though its soundscape is distinctly 80s, “Time After Time” is timeless (yeah I meant it). Cyndi Lauper’s “Time After Time” is an incredible song about being devoted to the one you love no matter what. Cyndi’s verses take you to a really dark place before the hook kicks in to catch you before hitting the ground. It’s an emotional roller coaster that I’ll never get tired of each time I hear this song.

Though the original song came out during my high school days, I completely missed it due to not being a fan of rock music at the time. Even now, I prefer to listen to the Walk Off the Earth cover, as I’m not a fan of the whiny vocal performance in the Wheatus original.

That said, this song is pretty much the Cinderella story high school me always dreamed of. I always felt like the teenage dirtbag that was completely overlooked. Unfortunately, the final part where the girl approaches him with the Iron Maiden tickets never happened for me during that time. Based on where my life would go after high school, I’m okay with never having lived out the full “Teenage Dirtbag” fantasy.

Ending this post on somewhat of a downer, “Imagine” by Ariana Grande is a song about an ideal vision of love that will never happen. It’s become pretty clear that it’s a song about her ex Mac Miller, who passed away last year. This ballad is backed by a trendy trap beat, soaring vocals from my favourite pop artist right now, and a sentiment of a love unfulfilled that crushes my soul each time I hear it. Even with the pain, it hurts so good.