Board Game Geek is the hands-down best resource for tabletop gaming online. It’s got a library of information for pretty much every board game and card game ever made, user reviews, message boards, user profiles that allow you to keep an online tally of your game collection and the results of any board game you’ve ever played, and more. At some point in one’s tabletop gaming journey, they will inevitably end up on the site and benefit from everything it has to offer.

Board Game Geek: The Card Game tasks players with playing games and building their collections. Every card in the game represents a real-life board game. I appreciate how every game includes a box shot and description, as it doubles as a way of discovering new games to buy and play in real life.

That being said, the actual game title matters little to how the game actually plays. Instead, three pieces of information on each card determine their relative value: game category, favourite icon, and gem icon. Each game fits into one of eight categories, which are also denoted by colour. Also, cards with the favourite or gem icon grant bonuses to sets, depending on how the cards are played.

On your turn, you can do one of the following four options: draw a card, place two or more cards of the same colour to denote games you’ve played, place two or more cards of a different colour to build a collection, or trigger a math trade. You can draw one of four face-up cards from the store, or draw one face-down card from the top of the deck. The one gotcha is that if you’re drafting a card with a favourite or gem icon, you’ll have to discard a card in exchange. 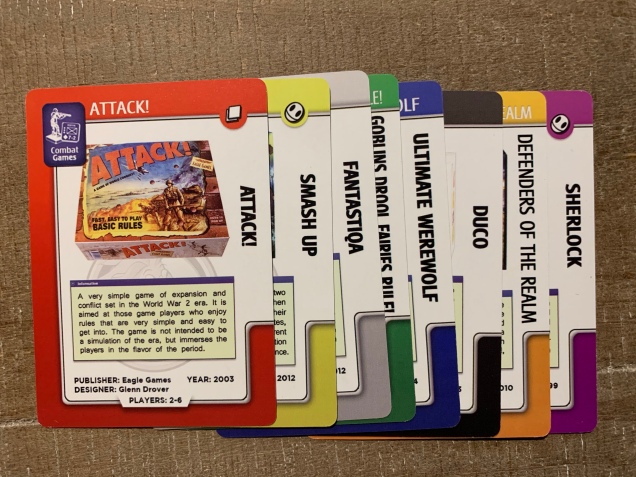 Thematically, the theme undermines the mechanics. While games can be played or collected, they can’t be both, which makes little sense. You can only play multiple games in the same category at a different time, but who only plays games in one category at a time? And collections have to be grown by two or more games at a time, but board games aren’t cheap and it’s not unusual to just buy one at a time.

If you can put the discrepancies aside, it’s a decent set collection game. You collect cards and play sets. What cards are valuable to each player will be different based on what sets they’re trying to build at any given time, which gives the game a bit of variability. Also, you do have to make some choices regarding gems and favourites. Would you play a favourite game as a gem? You sacrifice the favourite bonus, but may gain more points in the end if it helps you complete a set. The same scenario may occur where you may want to add a gem card to your played collection.

Scoring at the end is…a bit rough. Especially with just two players. Between Steff and I, our scores were north of 100 points, meaning we routinely needed a pen, paper, and a calculator to calculate our final scores. For a game that’s so simple to play, it’s a bit odd that the scoring is as complicated as it is.

For tabletop gaming enthusiasts, Board Game Geek: The Card Game is a neat novelty to have if you can still find it. The game kind of works like a physical version of the site when I just browse through the cards and consider which of these games I’d want to play in the future. As a card game, it’s a mediocre set-collection game with clunky scoring and a theme that doesn’t fully connect with the gameplay. You can pass on this one, unless you need to have a condensed version of the website in your pocket.