Over the past few months, I have amassed over 1,000 physical cards and thousands of digital cards. Most of them are completely useless in competitive play. I discovered very quickly that if I wanted to compete in Standard or Expanded formats, I was going to need cards that allowed me to compete with the bar set by the community at large.

Some of these cards I was able to randomly pull in booster packs. Most of these I purchased through promo codes off of Potown Store. Nevertheless, when I’m ready to battle, these are the cards I’m taking with me!

(Friendly reminder that I’m not associated with PoTown Store. I’m simply using them as a reference for purchasing online codes because that’s where I buy my online codes from. Also, next time you purchase something from there, use the code “potown” to save 5%! I don’t get a cut of that, either) 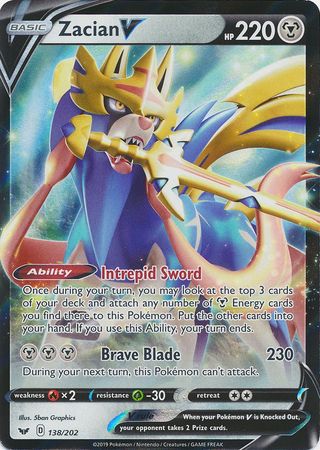 When I first started playing the game online, everyone was running this card. I have a set of Zacian V now and understand why.

This legendary wolf is an absolute stud. Thanks to its Intrepid Sword ability, it has the ability to quickly charge itself up and draw cards at the same time. When it’s ready to strike, Brave Blade hits for a staggering 230 damage, which is enough to KO every single-prize Pokemon and almost every two-prize Pokemon such as GX and V Pokemon in one hit. You technically can’t use Brave Blade on consecutive turns, but you can switch Zacian V out of play and bring it back in to reactivate the move and hit again.

While its partner card in crime Arceus, Dialga, and Palkia has left the Standard format, it’s still a force in almost any deck you put it in. I run Zacian V with the Inteleon line (more on that in a minute) and I look forward to slicing the competition for at least the next year!

I got my Zacian V cards from through Potown Store. You can too! 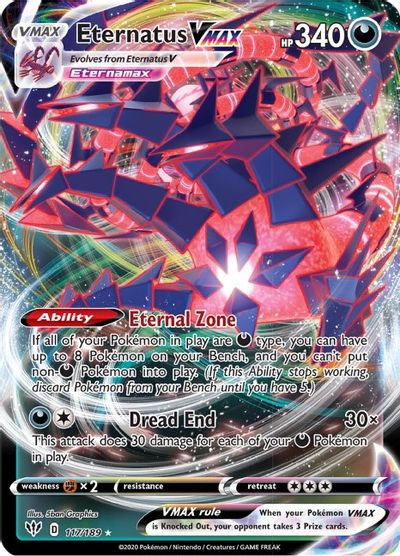 If you’re going to build a deck around Dark-type Pokemon, Eternatus VMAX is the card. Eternal Zone allows you to expand your bench to hold eight Pokemon, which boosts the damage output of its Dread End attack. Since it does 30 damage for each Dark-type Pokemon on the bench, it has the potential to hit for a whopping 270 damage per turn! Even in a post-rotation meta where Shadow Rider Calyrex VMAX is dominating, Eternatus can take advantage of its Dark weakness and obliterate it in one hit! When the stakes are high, this is my go-to deck.

Building an Eternatus deck in Pokemon TCG Online isn’t exactly cheap, but it’s totally doable. You can buy a full set of Eternatus and Eternatus VMAX cards through Potown Store. Don’t buy just the Eternatus V unless you already have a VMAX, as Eternatus V is useless on its own. While you’re there, grab the latest Trainer’s Toolkit, which features most of the best Trainer cards and a pair of Crobat V that will compliment Eternatus perfectly.

Crobat V may not be the best attacker. However, its Dark Asset ability makes it an invaluable asset in many decks regardless of what energy you use. By simply playing Crobat V on the bench, it allows you to draw your hand back up to six cards. While Crobat will then clog the bench and might be an easy target, its ability to draw more cards makes the risks worth it more often than not.

Odds are, you’ll never use its attack. But if you do have a Crobat VMAX, I actually find it incredibly helpful against the Malamar deck. Malamar is a single-prize Pokemon that has the potential to hit incredibly hard. It preys on bigger Pokemon in hopes of scoring advantageous trades. However, if Crobat VMAX hits first with Stealth Poison, it can KO Malamar in one hit and swap in a single-prize Pokemon to take the attack from the next Malamar.

For most, the two Crobat V that come in the Trainer’s Toolkit are more than enough. If you need more or need Crobat VMAX, consider grabbing the pair instead.

Sobble, Drizzile, and two different versions of Inteleon have become a staple in the Pokemon TCG meta. Evolving from Sobble to Drizzile gives you access to the Shady Dealings ability, allowing you to grab a Trainer card from your deck. The Shady Dealings version of Inteleon nets you two Trainer cards. With these abilities, you can essentially grab whatever cards you need from your deck almost at will.

Best of all, the Inteleon line goes with almost any main attacker in the game. It does all of its dirty work without needing any energy whatsoever.

The best way to obtain the framework for the Inteleon line is to buy the Inteleon VMAX League Battle deck. Quick Shooting Inteleon is harder to come by by virtue of it only being available in random booster packs, but here’s to hoping your Chilling Reign pulls are in your favour! 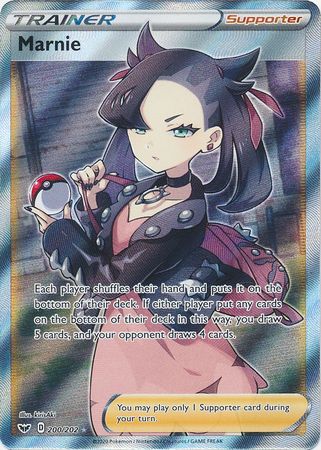 Every competitive deck runs a set of Marnie cards. Not only does she allow you to reset your hand, but it resets your opponent’s hand too! Unlike Professor’s Research, your existing hand simply goes to the bottom of the deck instead of having to discard everything. While there are absolutely cases where it’s okay to discard cards in exchange for Professor’s Research, Marnie’s ability to reset both hands without discarding anything makes it a must.

Marnie can be pulled from Sword & Shield base set booster packs. However, I would recommend grabbing the Trainer’s Toolkit instead, which has two Marnie cards and a host of other fantastic cards. You could even buy two Trainer’s Toolkits for a full set of every Trainer card in that box, which is still a better investment than trying to source all of these cards from their respective booster packs. 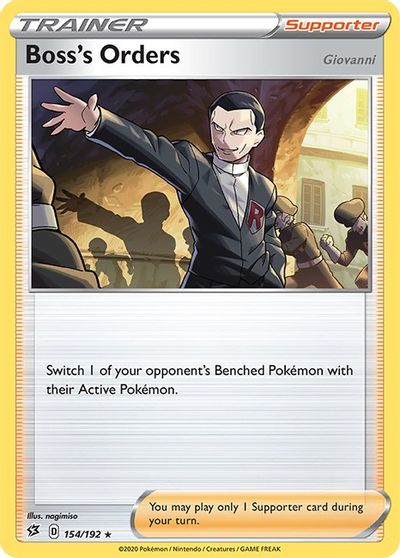 Whether you use the Giovanni or Lysandre version of the card, Boss’s Orders is a meta-defining card that everyone needs to have. When it’s played, you can swap your opponent’s active Pokemon with a bench Pokemon of your choice. Many games are decided by this card, as playing it is essentially a death sentence for the Pokemon being brought in. However, you can also use it defensively by dragging in a heavy Pokemon with no energy, rending the opponent unable to attack until it can move that Pokemon out.

As with Marnie, your best bet is to grab these from the Trainer’s Toolkit. 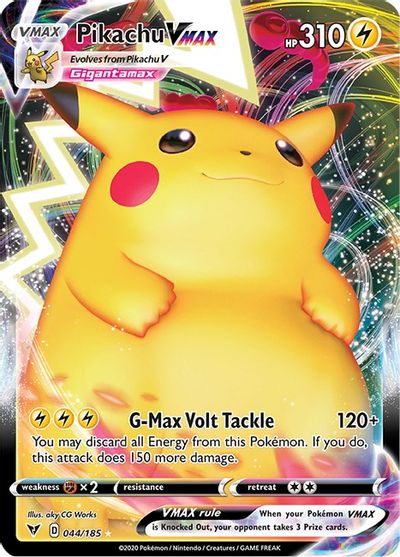 Pikachu VMAX is not a meta-relevant card. While it has the potential to hit as hard as Eternatus VMAX, it has to discard all of its energy to do that. Otherwise, it only hits for an unremarkable 120.

However, in a post Evolving Skies world, Pikachu VMAX has a partner Pokemon that covers its most glaring weakness. Flaaffy from Evolving Skies has the Dynamotor ability, allowing it to attach an energy from the discard pile to a Pokemon on the bench. I came up with a deck that allows me to cycle between Pikachus, each smashing for 270 each turn.

Part of me is incredibly biased towards this deck because it’s one that I theory-crafted myself. But I also love it because it’s actually performed decently-well in the dozens of matches I’ve used it in. Once the engine is set up, my opponents have a really hard time weathering the storm. With virtually no one else running this deck, I wish I could see everyone’s face when this cute chonky boi comes out of nowhere to dominate!