The League Battle series of decks from The Pokemon Company are a fantastic way to jump into competitive play. Following in the footsteps of Zacian and Inteleon before them, Single Strike Urshifu and Rapid Strike Urshifu are the latest Pokemon to get their own decks in the League Battle series. Not only are these two decks a great introduction to competing for realsies, both can be upgraded to become top-tier decks!

We’re going to cover both in time, but let’s cover the Single Strike Urshifu VMAX deck first. What makes this deck such a great option?

This deck comes with two copies of Single Strike Urshifu V and VMax. The former has the potential to knock out most Pokemon V with one attack while the latter can use its G Max One Blow to potentially one-hit KO literally any Pokemon in the game. In both cases, an early knockout on a Pokemon V or VMAX by either Urshifu can basically end a match before your opponent has a chance of playing.

Even though these League Battle decks aren’t meant to be top-tier out-of-the-box, the potential damage output of Single Strike Urshifu V and VMAX can lead you to victory if you get your board set up early enough. While I would still strongly suggest making some key upgrades to realize the full potential of this deck, you’ll still have a shot at winning against almost anyone if you can get to your second turn two with an Urshifu in the active and Houndooms on the bench. 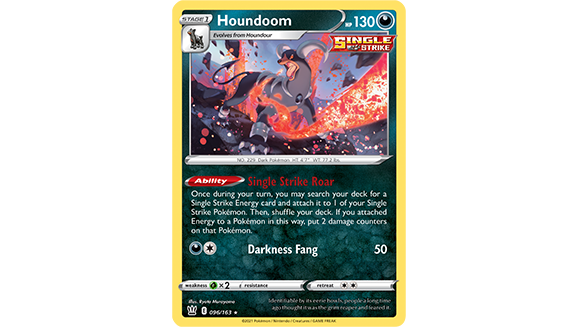 One of the biggest obstacles Single Strike Urshifu V and VMAX face is that their big moves take a lot of energy to use. Without any extra energy acceleration, they’re usually destined for failure.

But with multiple Houndoom on the bench, you can quickly attach Single Strike energy to Urshifu using its Single Strike Roar ability. Considering how important Houndoom is to Single Strike Urshifu – and to literally every Single Strike deck – it’s amazing that the League Battle deck comes with a full line of Houndour and Houndoom. 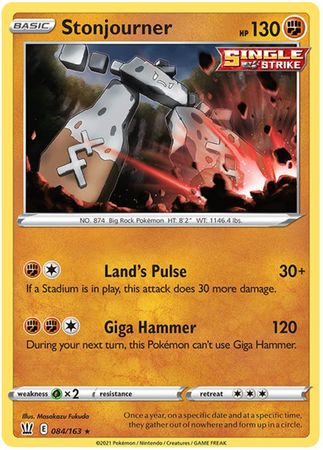 Don’t Forget About These Pokemon!

League Battle decks are designed to be a strong foundation for a top-tier deck, but aren’t necessarily top-tier decks out-of-the-box. This deck has a bit of filler, but it’s not nearly as bad as other V Battle or theme decks.

Rounding out the Pokemon list are Oranguru and Single Strike Stonjourner. The former is actually a great card in most decks but it’s an odd inclusion here. You’ll likely take Oranguru out of your upgraded version of this deck, but absolutely use them elsewhere. 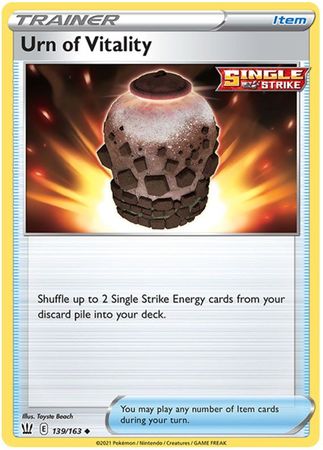 Good Trainer cards are crucial to one’s success in the Pokemon Trading Card Game. Not only does this deck come with numerous staple Trainer cards such as Marnie, Boss’s Orders, and Professor’s Research, but you’re also getting a suite of Single Strike Trainer cards and energy cards that essential in this and any other Single Strike deck you may create down the road.

This deck has almost all of the Trainer cards you’d need to make it work effectively. Better yet, this set of Trainer cards can be used in any future decks you make, especially in Single Strike decks!

This Single Strike Urshifu VMAX League Battle deck serves as the framework to a top-tier deck. The most common way to upgrade the deck is with Umbreon VMAX.

The pairing of Urshifu and Umbreon works so well because Umbreon covers Urshifu’s bad matchups, doesn’t need to discard energy when it attacks, and possesses a poweful gusting ability that can help Urshifu set up game-ending knockouts. This version of the deck is the one I use when I play in online tournaments and have seen great success with it.

However, due to its great playability and collector value, Umbreon cards are pretty expensive to get. As an alternative, consider adding in Yveltal from Fusion Strike. This single-prize Pokemon covers Urshifu’s psychic weakness while also having the potential to one-hit KO Mew VMAX.

As a potential alternative, consider Yveltal from Fusion Strike. Besides being much easier on the budget, Yveltal is strong against psychic, can be powered up with Single Strike energy, and has the potential to one-hit KO Mew VMAX.

Already have the deck and want to make it even stronger? Here are a few suggestions of cards to swap in! Don’t forget that decks require you to have exactly 60 cards, so you’ll need to make room for these!