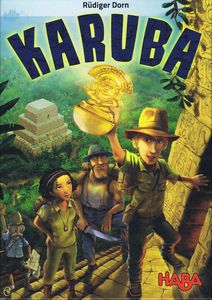 Best known for making quality kid-friendly games such as Animal Upon Animal, Karuba by Haba Games is a step forward for making strategic games for the whole family. In it, players will race their adventurers across an island in hopes of collecting the most treasure. Should you trek through this jungle in search of treasure and glory?

Each player will get a board of the island. From there, everyone will place their adventurers along the sand, while the temples are placed in the jungle. These need to match across all player boards to start. Players will also get a numbered set of 36 jungle tiles that feature pathways for the adventures to walk through.

Everyone except the leader should place their tiles in numerical order around their island. As for the leader, they will jumble up their tiles and place them in a stack. From there, the leader will draw the tile and in a clear voice, announce its number. 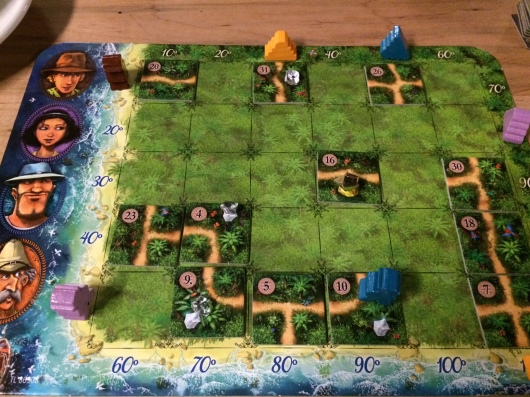 This is where things get interesting. With the tile in hand, you can either place it on the board in its original orientation while placing any gold or crystals associated with that piece. Or, you can discard that tile in exchange for movement points equal to the number of exits on each tile. It’s very easy to make sense of Karuba. Taking elements of Bingo, Solitaire and a pipe laying game, the core of the experience is one that most players can quickly pick up.

Ideally, you want to build paths and manage your movement points in such a way that allows you to get all of your adventurers to their colour corresponding temples first while collecting all of the treasure along the way. The reality is that a perfect run is basically impossible, especially when the tiles will be drawn in an order that will likely be less than ideal.

As such, you’re constantly pressed to make decisions about the paths you’re building and the moves you’re making. Poorly placed pieces can block the map in ways that limit your ability to collect treasure or reach temples. However, mismanage your movements and you could find yourself in a situation where you don’t have enough steps to reach your goals. Since players are playing simultaneously, the game moves quickly with no down time.

Karuba is a quality board game with great components and compelling gameplay. With two-to-four players of almost any skill level, you’ll have a blast trying to push your adventurers towards greatness.