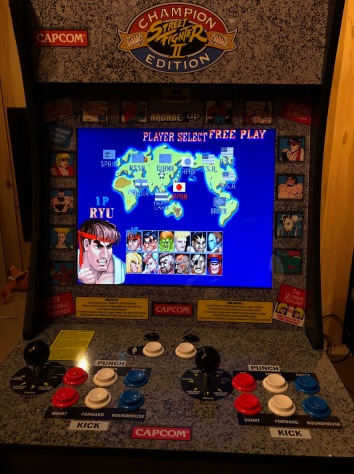 At first glance, the first thing you’ll notice is that it’s noticeably smaller than a standard arcade machine. Arcade1Up’s line of cabinets are 3/4 scale, which presents some pros and cons. You won’t fool anyone into thinking that it’s an original machine due to its smaller stature, but its smaller footprint makes it easier to keep in the house. Simply pull up a chair and it works wonderfully. If you want the authentic experience, you can buy a riser to get the height just right for standing play. Side-by-side play is a bit snug, but definitely doable with little fuss.

Though it’s a bit smaller than the original, it still mostly looks the part. The cabinet itself looks almost as you remember it, from the tacky pre-Super Street Fighter II art to the red/white/blue buttons. Oddly, the game uses a Japanese-style ball top joystick instead of the North American standard bat top, but I personally prefer the former. Modern fightsticks use ball tops, so I’m okay with this deviation.

Building the machine was a straightforward process. With the help of a screwdriver and a friend, you can build the machine in about an hour. If you’ve built Ikea furniture before, you’re fine. The only wiring you need to do is to plug the monitor into the joystick and into the power cable. Everything else is screws and dowels.

Once you’re ready to play, you’ll boot into a simple menu that allows you to choose from one of the three available Street Fighter titles. Unfortunately, the game doesn’t have any sort of options to adjust the timer, handicap or AI difficulty. This is particularly problematic for the Super Street Fighter II versions of the game, which were notoriously tough due to a glitch that made the AI harder than it should have been. You’re getting the most basic versions of these games; essentially what was available to you as a player in the arcade.

When it works, its magical. The screen is bright and vibrant and the sound from the one speaker is loud and clear. Save for the slightest bit of screen-tearing that you won’t notice unless you’re actively looking for it, the games looked and sounded right. In spite of the issues I had with the machine, I felt like a kid again. But the issues I had with the machine forced me to return the system within hours of buying it.

Despite their best efforts to protect the screen, the monitor came out of the box with multiple scratches. Some of them were glaring, even with the game on. I was willing to let a few scratches slide, as they did pack the machine well, and I could play around it.

What I couldn’t forgive the machine for were its joysticks. At the demo unit I played on at the store, some diagonal inputs failed to register every time. I chalked this up to it being a store demo unit that customers are beating up. However, the new unit I got actually controlled worse. Down-left inputs didn’t work on the player one side, making it impossible to block low when standing on the left. On the player two joystick, it was impossible to jump up-forward or up-back. Without functional joysticks, the machine was essentially unplayable, though also authentic to the arcade experience in a messed up way.

I called customer service but failed to get through after an hour of waiting. I have the know-how and Sanwa joysticks on hand to replace it myself, but that was also a pain to deal with due to Arcade1Up gluing down the metal plate to the wood panel and also laying the glue on the screws real thick. After my disappointing experience trying to make contact with them, I read assorted tweets from multiple users complaining about Arcade1Up’s poor customer support. Also read tweets from users who have been waiting for months for replacement parts. I decided to cut my losses and get my money back, cause I simply didn’t want anymore headaches and heartbreak.

Truly wanted to believe that the Arcade1Up Street Fighter II cabinet was the machine to fulfill a childhood dream of mine. If you get one that works as intended, it’s a wonderful addition to your gaming setup. Can’t speak to all of the machines out there, but mine was certainly a dud due to its scarred screen and broken joysticks out of the box. I still yearn for the day when I can own a Street Fighter II cabinet, but I’m not going to settle with this.