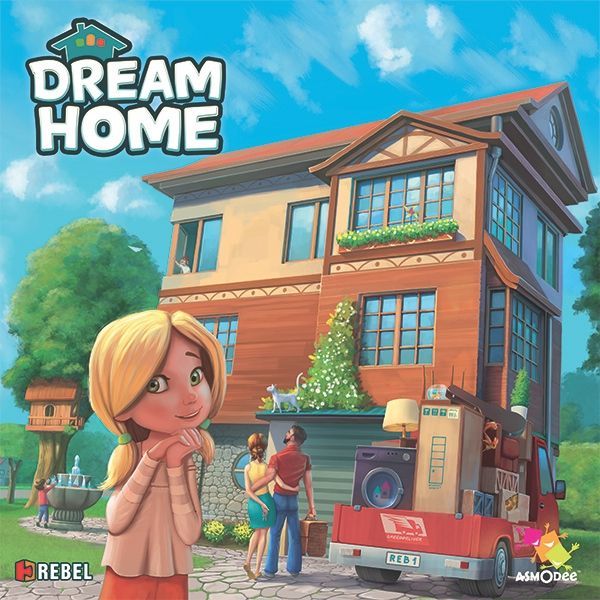 Over the past few months, the concept of a dream home has been a very real one for my wife and I. Having gone through the process of buying a home and now improving it to better suit our needs, everything gaming related has been pushed to the backburner in service of bringing our home to life. While it is far less expensive than the real thing, the Dream Home board game aims to turn the romantic elements of home creation into a family-friendly board game.

One-to-four players will be tasked with building the most valuable home. Value is based on a number of factors, such as the types of rooms you have, the size of certain rooms, how each room has been decorated, the completeness and uniformity of the roof, as well as the functionality of the house. At the start of the game, everyone will start out with an empty home featuring spaces to fill a main floor, upstairs, basement, and roof. By the end of the game, it will be built up to the best of your abilities and the player with the most points wins.

Just like real life for most, you can’t just arrange and outfit your home in any way you like. In this game, you’re limited to the options available. At the centre of the table resides a board featuring a row of resource cards and a row of room cards below it. On your turn, you will take one column of cards that will feature one resource card and one room card to add to your home. If you take the furthest left column, you’ll sacrifice a resource card in exchange for the first player token. Once you grab your pair, you’ll add them to the house while following a few rules of house creation. Once everyone has had a turn, the board is reset with new room and resource cards.

The gameplay mechanic of drafting a pair of cards leads to a lot of interesting scenarios. Oftentimes, you won’t have access to a perfect pair of cards you’re looking for at any given time, whether it’s due to the random combinations on the board not meeting your needs or a set you want being taken by another player before you’re due. Having the first player token will help in this regard, but first pick doesn’t always lead to the perfect pairs if the combinations don’t align in your favour.

On top of that, the rules around how you can build your house will impact your ability to build your home. For example, you can’t build a room in a space that doesn’t have a room under it. As such, you can’t build a room upstairs if you don’t have a main floor room set up directly below it. Another thing to consider is how certain rooms are scored. A small living room consisting of only one card is worth one point, but two adjacent living room cards form a larger four-point room, and a three-card living room is worth a whopping nine points. Ideally, you want to build everything to its optimal specification, but depending on the draws, you will likely need to change course on the fly.

Resource cards can give you even further scoring options or abilities to consider. One type of resource, decor, can be added to a room to further increase its value. Helper resources represent people that help you create your dream home and can give you end-game bonuses. Tools can oftentimes help you re-arrange your house after the fact in order to fix issues that arose earlier in the game. Roof tiles help you gain extra points by having four of them to complete your roof. Bonus points if they all match in style and if you have roof cards with windows.

The integration between theme and mechanics is fairly strong. It’s a concept that most players should be able to relate to, and the way that home building manifests itself through the gameplay makes sense. It’s clear why a bigger living room would be more valuable, or why you can’t build the upstairs before the downstairs, or how an interior designer can make your decor better. Because of how drafting works, you’re constantly tasked with making tough decisions of which cards to take relative to what you need now versus what will become available later.

It’s an enjoyable experience that’s quick to play and teach, but there are a few things that I found irksome. For one, I can’t stand the fact that roof cards aren’t placed on the roof, but on the side of the house. While it makes sense from a strictly functional standpoint, as roofs aren’t generally shaped the same as rectangular cards, placing roof cards as faux siding is a really hard thing to grasp. It’s a cosmetic complaint, but it does take me out of the moment.

More concerning is the replay value. I like the core game a lot, but after a few rounds, it felt a bit samey. This is due to each game tasking you with building the same core staples of bedrooms, living rooms and kitchens, with a few decor items and novelty rooms filling in the gaps. While I haven’t played with the expansion, it seems like a worthwhile addition to my primary criticism.

Whether you’ve just bought a home like me, have owned a for many years, or dream of having your own someday, Dream Home is instantly relatable and very quick to pick up. For those looking for a lightweight game with some strategic bite, the combination of a great theme and interesting gameplay choices make it an easy one to play with casual gamers. After a few plays, definitely consider spicing things up with the expansion to help shake the monotony that will eventually set in.

One thought on “Dream Home Review”