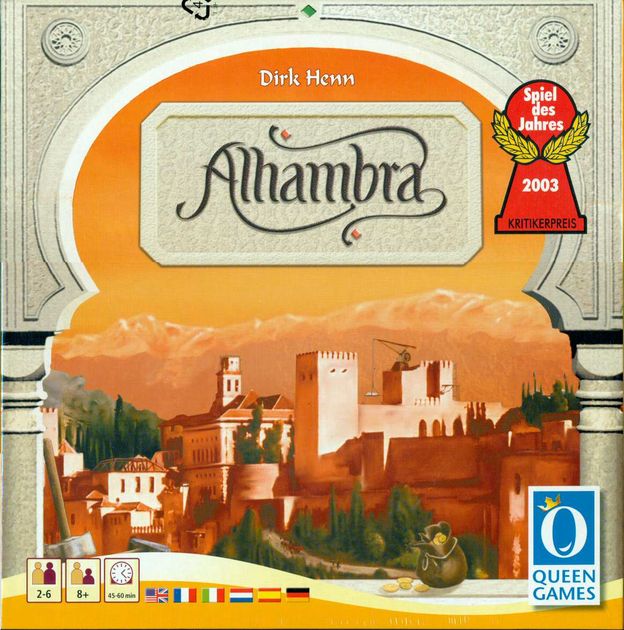 Alhambra transports players to Granada in the year 1278. As the master builders of the time, each of you is tasked with building your own Alhambra complex. Do you have the vision of a master architect and the financial sensibilities of a project manager to build the best one?

This game is primarily played with tiles, which represent the different types of buildings that can be built, and cards with different dollar values and denominations. Each colour represents a different currency, as your workers prefer to get paid for their work in their local currency. At the start of the game, players will start the game with a hand of cards that are equal to or slightly greater than 21, as well as a fountain tile that will represent the centre of their Alhambra. In the middle of the table is a board with four buildings on display; one for each type of currency, as well as four randomly drawn cards face-up.

On your turn, you can perform one of the following actions: buy one of the buildings on display to add to your Alhambra complex, take a money card from the available funds on the table, purchase a building tile with the corresponding currency, or replace a tile on your existing Alhambra with a new one. There are some interesting wrinkles to these actions, as there are bonuses that can be triggered through specific means. For example, you can draw two money cards instead of one if their total value is five or less. More dramatic is the exact change mechanic. Vendors don’t give you change for your purchases, but if you pay in exact change, you get one extra action. This allows you to get up to five total actions on your turn if you’re able to buy all four available building tiles with exact change.

Once you buy a tile, it’s time to place it in your complex. Wherever you place the tile, it must create a direct path to the fountain. Also, for walls, you can’t build anything outside of the walls. Generally, you want to give yourself enough space to sprawl in the middle while bordering the whole complex with a fully-formed wall around it. Play will pause at two points to score based on the number of each building type each player has, as well as based on longest continuous wall length. Once all the tiles are gone, the player with the highest score wins.

Alhambra at its core feels like a mash-up of two great board games: Ticket to Ride and Carcassonne. The collecting of money is similar to the former, while the tile-placement is more akin to the latter. However, the subtle wrinkles in its mechanics give the game some unique flavour. In particular, I love the exact change mechanic. On one hand, being able to pay in exact change can pay dividends by giving you extra actions. However, sometimes, you really need a tile and are willing to overpay at any cost in order to build your Alhambra a specific way. It always gives you some interesting decisions to make on your turn.

Personally, I would prefer to play Ticket to Ride and Carcassonne as two separate games. However, Alhambra achieves what it sets out to do and ends up being a solid game with no major faults. If you’re in the market for a game in the same general weight class and style as the aforementioned classics, this is a worthwhile next step.