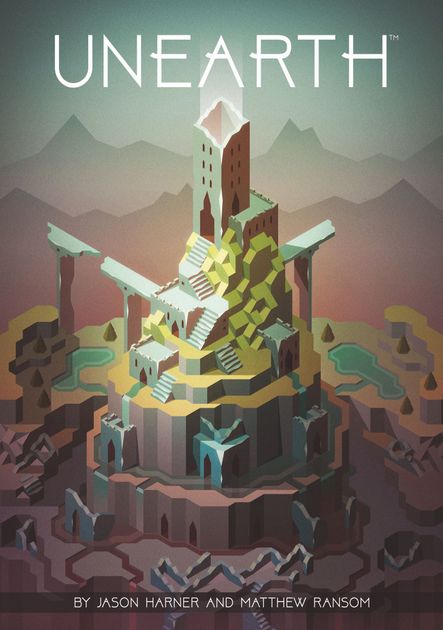 Once upon a time, our ancestors built great cities across the world. In the present, two-to-four “Delvers” are tasked with claiming these ruins and building new landmarks to restore these areas to their former glory. It’s a rather elaborate setup for Unearth, which is essentially a press-your-luck dice game. Are you ready to get some dirt in your nails in order to renew a city lost in the annals of time?

Each player will receive a set of dice. One D4, one D8, and a few D6s for good measure. These represent your Delvers who will help you rebuild these lands. In the middle are a set of cards that represent one of the many lost cities in the game. Each city has two numbers on it: the total die value required to discover the landmark, and the number of stone tiles that should be placed on it, which is done as each card is revealed.

On your turn, you will use one of your Delver dice on a card of your choice. When you roll, your result will be added towards the value of that card. Multiple players can also throw their dice in the pool, and when the threshold is triggered, the player with the highest die roll for that card claims it and the points associated with it. Not all is lost if you missed out on the card, as anyone with dice on that card that didn’t win gets one Delver card for each die they committed to its discovery. Delver cards give you extra abilities such as re-rolling dice or adjusting die values. Even though you lost the battle, the extra Delver cards can help you win the war tomorrow.

If you roll low, that’s not necessarily bad news, either. Rolls of 1, 2, or 3 are rewarded with a stone of your choice from that land. Arranging these stones into a closed hexagon will give you Wonders, which also give you points based on how you complete them. Any mishmash of stones will give you points, but creating specific patterns can yield big rewards if you can pull them off. On top of that, you can create sequences where a set of stones can be used to close off multiple structures, giving you an extra layer of strategy to employ. This continues until all of the city cards are gone, at which point the player with the highest points after calculating all of the bonuses wins.

Unearth features a distinct look thanks to its art direction and colour-palette. Even though it’s just cards and tiles, it looks really good on the table. As for how it plays, it’s an interesting take on the press-your-luck style of game. You’re ultimately at the mercy of dice, but the game gives you a number of opportunities to score points, even if you’re rolling low. I didn’t play enough of it to judge, but it seems like playing for the cities or the landmarks were worthwhile paths to victory.

It’s clever in its execution. Despite being largely dependent on dice, you’re almost always getting rewarded with something, even when something good happens to your opponent. That said, even with all of the ways you could manipulate your values, it felt a bit too light for my tastes relative to the level of effort required to set up and play. Just didn’t feel like there was enough for me to do to stay engaged throughout. Would recommend giving this a try at a board game cafe or at a friend’s place who has a copy already, but it’s not something worth rushing out to buy immediately.