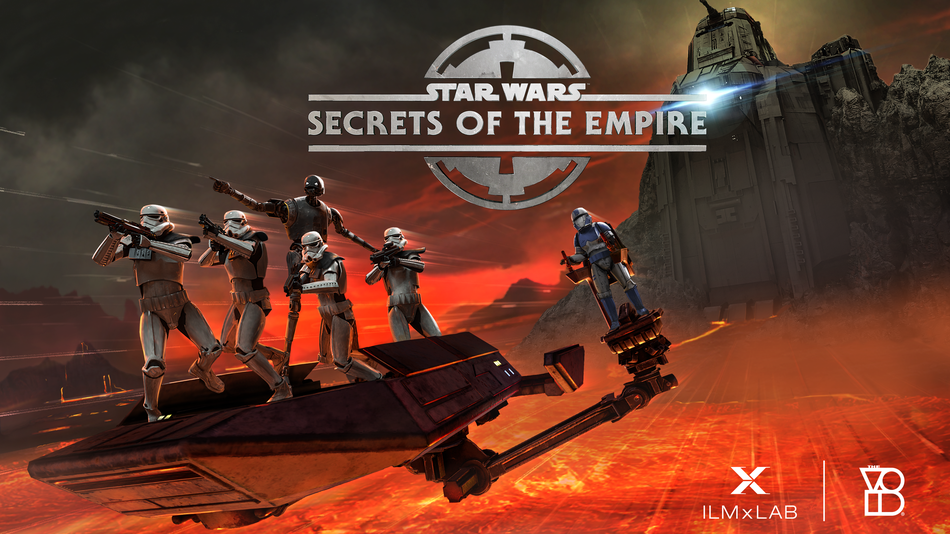 From the blocky pixels of Star Wars on the Atari 2600, to the large-scale combat of Star Wars: Battlefront 2, video games have continually evolved in order to bring players closer to the action. Star Wars: Secrets of the Empire is a VR experience that raises the bar for immersion to an all-time high.

Unlike your at-home VR experiences, this Star Wars VR experience can only be played at certain locations of The Void. Specializing in fully-immersive VR, getting into the game means more than just putting on a headset. Every aspect of your senses (except taste) are put to good use.

In this roughly 20-minute game, up to four players are tasked with infiltrating an Imperial base while disguised as Storm Troopers. Your goal is to get intel on a mysterious crate, as its contents could turn the tide on the war. Can you get the intel that the Rebels need?

Besides wearing a VR headset, you’ll also wear a special vest. This will vibrate in specific spots where you get shot. It’s a bit heavy, but I didn’t think about it too much once the experience started.

Once the headsets were activated, I found myself standing in a room with Steff in disguise as a Storm Trooper. I waved my real-life hand and was shocked that my hand and arm actions were being replicated in the game as well without me having to wear any extra sensors. There’s the slightest bit of input delay, but I was floored that the game could even track that.

The immersion doesn’t stop there. Having the entire area built out and mapped to your in-game activity, we moved around the environment on our own two feet and it truly felt like we were sneaking in and fighting our way through. Other physical objects that manifest themselves into the world were levers, buttons to enter codes, and blasters that you pick up along the way to shoot enemies.

What really pushed the experience over the top for me was a moment where you must ride along a floating platform to the station. With the ability to peer over the platform to the lava below, to the wind blowing in your face as the platform moved forward, and as the temperature in the room rose to simulate the heat from the environment, I was genuinely scared of falling off the platform and being scorched by the lava. You could even smell the burning in the environment!

VR by itself is cool, but the level of immersion that Star Wars: Secrets of the Empire absorbed me into the game on a whole other level. Creating an environment that stimulates almost every sense made me truly feel like I was in the game. Though the experience was certainly pricey, I don’t regret giving this a try at least once to see how far VR technology can go when the physical world is built to match the digital one. Together, the experience is the ultimate gamer dream. I can’t wait to see how it gets better from here!

4 thoughts on “Star Wars: Secrets of the Empire Showed Me How Cool VR Can Be”