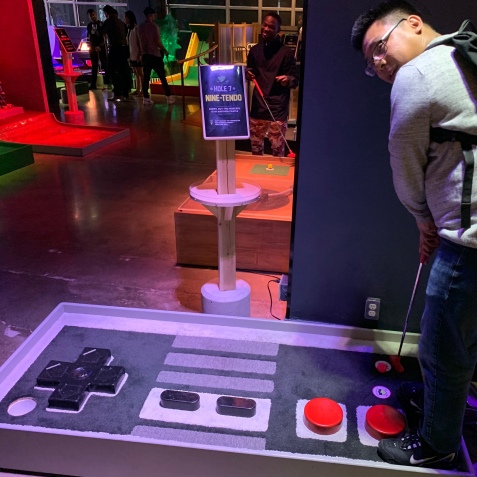 Located in the theatre district of Toronto, Par-Tee Putt combines the joy of mini golf with pop culture and alcohol. With holes based on Pokemon, Game of Thrones and The Price is Right among many others, this attraction has created a lot of buzz in the city. With a few hours to spare before the Lizzo concert, my wife Steff and hit the back nine for a few hols of geeky mini putt.

Par-Tee Putt features a whopping 27 holes. Oddly, you can only pay to play 9 or 18 at a time. Seems like a missed opportunity to offer a package that allows players to try every hole available. Nevertheless, it seems like a lot of mini golf on paper, especially in a space that used to be a restaurant.

Each hole is themed after something related to pop culture. One Seinfeld-themed hole features the body of George in his underpants with his head cut out so that you can place yours their instead. Another is themed around Tron, requiring you to shoot around the neon trails behind dueling light cycles. Most impressive is the Game of Thrones iron throne, built entirely with golf clubs.

While each course makes for incredibly Instagram-friendly content, the actual part where you play golf is a massive disappointment. The space Par-Tee Putt had to work with was small to begin with, but they only exacerbated the issue by creating 27 holes instead of the standard 18. The distance between most holes is under six feet, which is incredibly short for a mini golf hole. Combine that with the fact that almost every hole is played on a flat surface, the shots you’re required to make are rudimentary for the most part.

The theme adds very little to the golf itself. Most of the time, you’re just shooting on a flat plane with junk on the floor as obstacles. One of the coolest holes is designed as though you were golfing along a wall, with wall-mounted plaques on the floor acting as obstacles and furniture affixed to the actual walls. Neat! The problem is that it’s literally a straight shot. You don’t need any of this window dressing to make that hole.

The Ninja Turtles hole is really cool in concept, as you hit your ball up a ramp and into one of many tunnels that will shoot your ball to the other side of the course. However, it’s intentionally designed with a lip covering the holes so you can’t see exactly where to shoot. Again and again, my ball would bounce off of the entryway with no clear understanding of why my shot wouldn’t go through.

Even a few of the holes that featured great golf concepts were squandered in other ways. The first hole we played involved a giant mechanical ferris wheel that would carry your ball and drop it on the other side. Looks amazing, but there’s basically no way to mess it up or score a hole-in-one, as the on-ramp is easy and the ferris wheel will always drop the ball just short of the tin. What’s the point of this existing if everyone is going to get the same score?

My favourite hole doesn’t actually require you to play golf at all. It’s a giant labyrinth maze where you tilt this giant board, trying your best to score at the farthest possible hole. We actually played that one multiple times because of how fun it was, but our balls would get stuck in the return, requiring us to fish it out with our clubs. The one pictured at the top on a Nintendo controller might have actually been a hazard. In its current condition, the hole is uncomfortably wobbly.

For players just looking for a place to consume adult beverages with friends while taking cool social media snapshots, Par-Tee Putt will make you the envy of everyone on your friends list. But if you have any desire to play a decent round of mini putt, this experience was massively disappointing. So much effort was put into making these courses look cool, but not nearly enough was spent on making them fun to play. Someone is bound to find the right balance, but this certainly isn’t it.