Like NES Contra that came before it, Super C is based on an arcade game with “almost” the same name. Called Super Contra in the arcades, I read somewhere that the full name was shortened in order to get away from the Iran-Contra affair of the 1980s. Please correct me if I’m wrong on this. 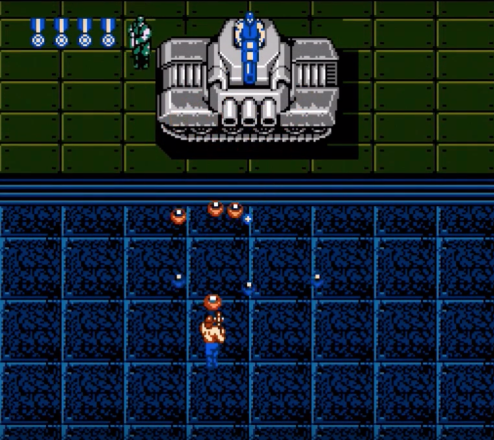 Maybe they would have triggered a political firestorm by keeping the original name, but it feels like the adjustment really hurt the game’s marketability. While it only takes a second to realize that Super C is a part of the Contra series, I feel like this title change really hurt the game’s legitimacy in the eyes of consumers at the time.

The other issue that I think holds it back is that it doesn’t have the Konami Code. Before it became a thing that became synonymous with Konami’s games, they used a different code for Super C. Furthermore, it only gave players 10 lives instead of 30. Combine that with the game’s slightly higher difficulty, and I bet that many fans of the original bounced off this one when they couldn’t beat it once.

Part of the Contra appeal for me was that even though these games were challenging even with the codes on, I could still beat them, even if I barely squeak by. I’d never beat the original game with the Konami Code. With it, I’ve beaten that game more than any other game in my life. In Super C, even with the code on, I still needed save states on modern platforms to beat it.

If it had the full name and the 30-life Konami Code, would it have succeeded on the scale of its precursor? I don’t think it’s crazy to believe it could. Having played it a few times in recent years as part of the NES Classic and the Contra Anniversary Collection, Super C is just as good, if not arguably better than the original. It retains the frenetic action of the original while presenting everything with better graphics, a few new weapons, and cool top-down stages that add variety to the action.

Now that I’ve truly given Super C an honest try, I believe that it really got the short end of the stick for superfluous, yet critical reasons. Despite its quality being at least on the level of the first one, the only things really holding back were its name, a series of button inputs for an extra life code, and additional lives that came with the code. It’s probably too late to write the book on Super C, but you may be surprised with how strong that game still is if you passed on it back in the day.