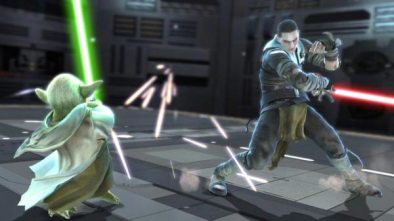 Within minutes of first playing Soul Calibur IV, the game has already figured out how to infuriate me. I’m not even close to being a good player at any Soul Calibur game, but I did play enough Soul Calibur II to beat the game on normal difficulty with every character. Having been out of practice, I decided to get reacquainted with the systems by starting out in Arcade mode.

Up until the second last level, I was doing just fine. But it was then that I was pit against the Apprentice.

I didn’t stand a chance against him. I was absolutely obliterated over and over again. I figured that maybe because I haven’t played Soul Calibur in a while was the reason for my poor performance. I quit out of the game and dropped the difficulty to easy.

This didn’t help. I could get to him faster, but he was destroying me all the same. After 20 minutes of punishment, I actually quit the game and double-checked to make sure I was actually on easy. Turns out, it was on easy.

So why the insane difficulty? After another 20 minutes, I finally did beat him. Not because I fought the better fight, but because I spotted a hole in the AI that left itself exposed to throws. Even this tactic wouldn’t save me from getting beat down. What makes this even weirder is that the last boss (while tough) isn’t nearly as difficult as the Apprentice.

Someone at Namco must have messed this up. How is the second last boss tougher than the last boss? And how is the second lass boss, who among Soul Calibur IV experts as a mid-tier character at best, be so much more difficult than anything you’d face on any difficulty level? At least it’s comforting to know that I’m not alone in this dilemma.

I plan on continuing with Soul Calibur IV going forward. It’s just such a damper to run into some infuriating game design so early into the experience.