As far as I know, I am currently not a father. I’m not done living the “free” adult life at this point in time. However, at some point I would totally love to be a father. I don’t really think that much about it, but when I do, I often think about how I would introduce video games into the life (or lives) of my future little ones.

When I first started thinking about it way back when, my initial stance was almost anti-video game. I had this idea in my head that I can somehow shelter my children from video games long enough for them to value such things as human interaction and playing outside. Realistically, that’s not going to happen, considering that 99% of boys and 94% of girls nowadays play video games. If my kid is in the minority that doesn’t play video games, I won’t force them down their throat.

Realistically, I’m still going to be a gamer when I’m a dad, and I won’t be able to hide everything I have. If my kid gets curious, how do I introduce this medium to them? 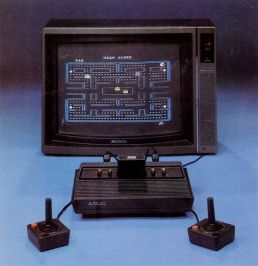 The “nerd-romantic” answer is, “Start them from the beginning.” I’m just old enough that the first video game system I ever owned was a hand-me-down Atari 2600. For the most part, I’ve been able to experience this medium in its entirety. I love the idea of starting my child at the beginning and having them see where this medium came from and where it’s going. That in itself is probably too much to ask from a child ages 3-4. The other advantage of starting out with the old stuff is that (to an extent), old games were simpler back then.

There are a number of holes in this logic though. For one, you wouldn’t introduce your kids to film and music with early Charlie Chaplin works or Gone With the Wind. Why do that with video games? Also, the moment your kids see other children playing “Hot Game Y”, it doesn’t matter how old or new it is. They’ll just want whatever everyone else is playing.

For me, the true magic for me happened when I first played Super Mario. Over the years, I have seen a number of kids begin their life-long journeys with later Super Mario games, such as Mario World, Mario 64 and New Super Mario Bros Wii. While the Mario games weren’t always the easiest to pick-up-and-play, millions of kids around the world made the effort to figure it out because the games were that appealing. I wouldn’t mind at all starting my child off on Mario, but more what I’m trying to get to is the idea of starting them off on games that they find interesting. Mario is very much kid-friendly. I just cringe at the day when my child wants me to buy them “Disney Movie Tie-In Shovelware Game X”.

Not to meander too much, but that last sentence brings up the idea of gaming taste. Part of the appeal of being the one to introduce your kids to video games is that you can (to a point) control what your kids play. I would like to think that my future child would have awesome gaming taste, but there’s no stopping a determined child from playing “Shovelware Game X” at some point. Sometimes you just have to learn the hard way.

Or how about going in a completely different direction? Nowadays, there are more kid-friendly educational options than ever. Maybe something like a Leapster would be the best way to go. In my day, I wouldn’t touch the obviously kiddie stuff with a 10-foot pole, but if you get it in early enough, my future child could have a blast with it and ease their way into a medium I love.

I suspect that I won’t have to make a choice on this for at least a few more years. Until then, I’ll mull over all of the potential options and keep my Atari working in case I actually want to start my future child from the very beginning. Good luck with my copy of E.T., future kid.

2 thoughts on “Passing The Controller to the Next Generation”

#airhornx3! The squad reunites to get these dubs in Rogue Company! Come on over!
Jinx
Pushed to the limit!
Thank you again for helping the channel reach 400 follows! Whether you enjoy the stream live, watch the VODs later, or you just hit the follow button that one time, I hope that the channel continues to make your day better every time you come by. Now let’s make it rain!
#airhornx3! Celebrating 400 follows on Twitch with a money gun and Streets of Rage 4!
When did you first play the Pokemon TCG?