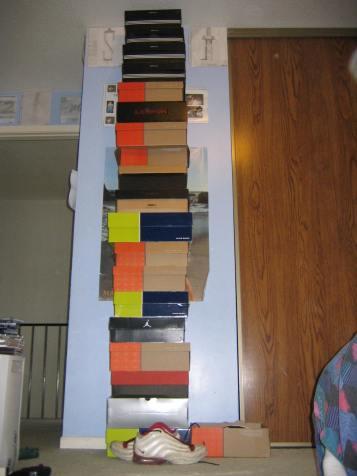 While I have owned hundreds of video games in my lifetime, I’ve never considered myself a collector of video games. To me, having a collection of games was merely a side effect of playing a lot of games. Also, I almost never buy games just for the sake of having them, as I generally have a plan to play everything I own eventually. To me, my one true collection was/is my sneaker stash.

Before I began collecting, there was nothing special to me about shoes. As a kid, I simply wore what my parents got me and went on with my life.

However, after brief stints of being really into baseball and road hockey, my attention shifted towards basketball. The sport itself and the people who play it look at their footwear in a very different light. Shoes in that world don’t just serve a functional purpose. They’re a fashion statement. They are the embodiment of your individual personality when you’re wearing identical uniforms alongside your teammates. As shoe culture matured, certain pairs of shoes represented an important point in the history of the sport. Most importantly for my adolescent self, wearing a cool pair of shoes inherently made me look cool, too. I don’t think I would grow to appreciate the finer points of shoes until later in my collecting life.

The first pair of sneakers that inspired me to get into shoes were the Reebok Kamikaze. Besides the fact that they were Shawn Kemp’s signature shoe, I loved how striking they were in contrast to virtually any other shoe I’d ever seen before. Those bold lightning bolts on the side still do it for me today. When I first saw those on a store shelf, I knew I had to get those into my life one way or another.

This is where the conflict between my parents and I about fashion would begin. High-end sneakers are hard to justify as parents when they’re so much more expensive without any sort of tangible benefits. Well, no tangible benefits in their eyes. For me, you couldn’t put a cost on ‘cool’. I would have done damn near anything to have those shoes on my feet.

Eventually, those Kamikazes did end up on my feet. Many months after their initial release, I scooped them up on sale at an outlet store in Buffalo, New York. When I wore those shoes, I felt like I was a superstar. That is, until they got dirty. With only hot pair of shoes in my stash, I felt a strong desire to keep these as clean as possible. I would regularly clean them with a toothbrush and soapy water. I’d also avoid grass where possible to steer clear of any potential stains.

Once I had the experience of wearing high-end sneakers, I couldn’t look back. My feet had been spoiled, and the pressure to have fly kicks on only grew stronger as I became more involved with organized basketball. At that point, everyone had on the latest and greatest, from Air Jordans to whatever other top-of-the-line Nike’s were out there. I knew I couldn’t afford those, but I’d try my best to keep up either by buying the best stuff when it went on clearance or by buying the lower-end models of the brand name shoes.

Before I hit high school, my shoe game peaked when I asked for (and received) a pair of Adidas KB8s for Christmas. Up until that point, I always asked Santa for video games. On that particular year, there was nothing I wanted more badly than the signature shoe of the NBA’s biggest rising star. Those shoes represented a great time in my personal basketball career too, as those were what I wore as the starting point guard for my middle school basketball team.

For a good 4-6 years, I was on a one pair of shoes per year rotation. I’d wear them not just for playing basketball, but as my everyday sneakers as well. However, a weird series of events led to me owning two pairs of basketball shoes at once. Late in my high school career, I tried out for the senior basketball team. It was a very painful process, as my legs were constantly cramping up. Eventually, after I got cut from the team, I realized that the shoes I was wearing were the problem. A week or two after being cut, I was added to to team since someone else could no longer fill that role. Knowing that I couldn’t wear these going forward, I went out of my way to get the most comfortable shoes I could find.

This is where I would cross paths with the Nike Shox Stunner. Yes, these shoes are ugly as sin, but they also were hands-down the comfiest shoes I’ve ever played basketball in. While they were a cringe-worthy $220, the comfort and success I had in those shoes made them well worth it to me.

It was at this point where I established a clear division between the shoes I’d wear for every day life and the shoes I’d wear solely for basketball. The shoes that caused me calf pain were fine as long as I didn’t play in them, which made them perfect as my every day shoes. As for the Shox, those became my go-to basketball sneakers.

Once this division was set, things only got worse for my bank account. It became easier to justify buying more and more as I came up with all sorts of reasons for buying shoes as I came across them. I’d start buying solely because they were associated with a player I really liked. Or because I thought they were really cool. Or because I wanted a pair in a specific colour to match an outfit. I even bought a pair that I had no intention of ever wearing; just for the sake of having it in the collection. Or because they were on sale online. If you can think of a reason for buying, I probably used it to justify having another shoe box in my closet. Heck, I even bought a pair of shoes that were two sizes too big just because I wanted them and they were on sale. 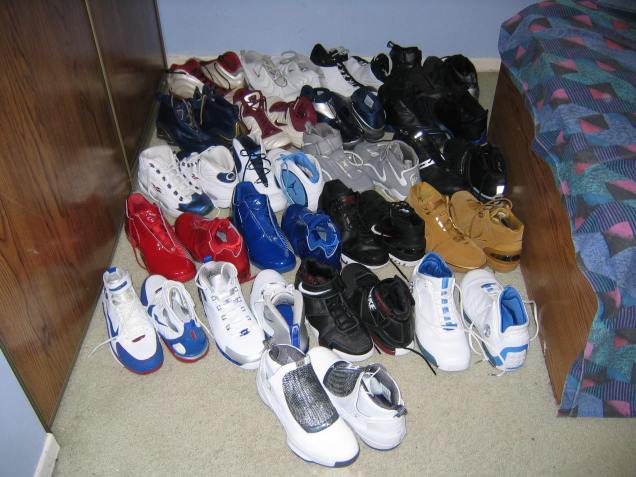 At a certain point in my life, the thrill of hording sneakers wore off. Because I was out of school and not playing basketball as much, I had fewer opportunities to wear them in places where people would appreciate them. Real life costs also started cropping up by this point, as I had car and insurance payments to keep up. Most heartbreaking to me was the shift in shoe trends. To this day, I still adore the sneaker design sensibilities of the 90s with the comfort of a modern shoe. However, the relaunch of the Air Force 1 shifted everything towards the world of retro. I hated that look, and I also didn’t like the design aesthetic of the modern sneakers were going, either.

This perfect storm led to me bailing out on the shoe hustle. I haven’t bout a pair of sneakers since 2005. Since then, I’ve been wearing one pair as my go-to until they wear down, then moving onto the next one. I often joked about not having to buy another pair of sneakers until I turned 50, but recently, I discovered that many of seldom-worn shoes are falling apart. Turns out, shoes were not designed to live this long, and many of them are deteriorating solely from age. In hindsight, I kind of regret not wearing my nice shoes out more often, because now I can’t get much of anything from them in their broken-down state.

Do I miss being a sneaker fiend? Yes and no. There are no shortage of shoes from the 90s and early 2000s that I’d still love to buy someday. The Jordan XIs are my holy grail, as I still think they are the definitive basketball shoe. The ironic thing is that when I was really into collecting, I was at best making $14,000 a year as a stock boy. I make notably more money now, but shoes are way harder to justify now when I have to pay for grown-up stuff, such as rent, car payments and insurance among other things. How can I justify buying a pair of sneakers at this point when a pair of shoes will likely eat up my grocery budget? Also, how can I justify yet another pair when I have well over a dozen still sitting in my closet?

Even if you take away the realities of being an adult, the shoe game just doesn’t excite me like it used to. Chalk that up to a combination of designs I don’t like, a hobby that’s expensive to maintain and a lifestyle that doesn’t mesh well with flaunting fly kicks. Life goes on I guess.