Pandemic made a fantastic first impression on me. Since that fateful first try, the game has become a favourite on board game night while inspiring me to look for more games of that flavour. After weeks of research, I picked up Forbidden Desert. Some may know it as the direct sequel to Forbidden Island, but the immediate connection is the fact that this is the latest game from the designer of Pandemic. While this is another co-operative adventure, does it do enough to step outside of its spiritual successor’s shadow?

In this game, you and your comrades are stranded on a desert after your helicopter crash lands. Your only way out is to find four missing parts of a magical flying machine and to fly away to safety. This is easier said than done when a constantly-swirling tornado is burying everything with sand and the hot sun is forcing you to drink the little amount of water you have handy. If you and your team are unable to fly out of the desert before you’re swept away by the tornado, buried in the sand, or run out of water, you will all die.

The odds are not on your side, but you’ve got some tricks up your sleeve. Each player is given a unique ability that makes them stronger in specific situations. You can also dig up equipment that will make excavating or survival just a bit easier. By working as a team while taking advantage of each person’s particular strengths, you stand a better chance against Mother Nature.

On paper, there are parallels that can be drawn between Forbidden Desert and Pandemic in regards to their cooperative nature and how certain mechanics work. However, once you find yourself trudging through the sand, the feel of the experience is rather different. Most of the credit for this goes to the game’s modular board, which is made up of 24 double-sided tiles that are arranged in a 5×5 pattern with a space in the middle that represents the tornado. 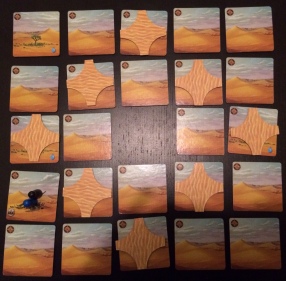 At the start of the game, all of these tiles look like a barren desert. By digging in these spaces, you can uncover what’s under the tile, which can be anything from new gear, a clue for where a certain flying machine part is, or even a well that can be used to refill your water supply. This quickly becomes harder to do as the tornado moves the tiles around while burying everything in its path with more sand. Before you know it, certain tiles will be very difficult to dig through, as stacks of sand tiles begin to form.

I like how this mechanic fits the theme while also being an interesting way to counteract the “alpha gamer” effect. Having played a lot of Pandemic, I have noticed that it can be really easy for more experienced players to simply dictate orders to everyone else. Because most of the information about the world is obstructed by sand, players are generally given a bit more wiggle room to dig wherever they want in hopes of finding the next great thing. You still have to work as a team to win, though the element of chance lowers one’s desire to micomanage others. 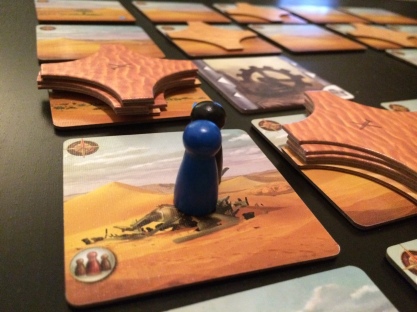 For all of the effort it goes through to simulate the experience of being stranded in the desert, one aspect of the game that I find jarring is the thirst mechanic. In Forbidden Desert, if one player dies of thirst, everyone loses. If we were really stuck in a desert and one person died in this manner, the rest of us wouldn’t just keel over and die with them. It’s an arbitrary rule put in place to prevent player elimination, though it clashes with the theme in a way that obviously doesn’t make sense in real life. I guess you could play with house rules and allow for play to continue if someone dies of thirst, but that could throw off the balance of the game in other ways.

Despite that one foible, I think Forbidden Desert is pretty solid. There are a lot of neat ways that the game approaches cooperative play to make it feel different from its spiritual predecessor. Once you’ve got things rolling, it can be rather enjoyable and tense. The first few games that Steff and I played were a bit lukewarm, but when we broke it out at a 4-player board game night, this ended up being a huge hit. If you’re in the market for more cooperative games and you’ve grown tired of saving the world from disease, this is a worthy alternative.