Somewhere in a galaxy far, far away, our minds think of extraterrestrial worlds, space ships and out-of-this-world weapons. Board games are generally a playground for medieval fare, though I’m much more interested in games are grounded in the world of science fiction. Why mess with horses and swords when you can play with the Starship Enterprise and lightsabers? This month, let’s go to infinity and beyond with a sci-fi themed board game night!

Space Cadets is the ultimate USS Enterprise simulator. Just like on the show, each player is responsible for different functions of the ship, such as setting up the shields, firing the lasers and starting up the jump drive. All of this is accomplished by a crazy network of mini games that tie together into one cohesive experience. For example, the sensors person locks onto targets by pulling out specific pieces from a bag without looking, while the weapons person must flick a disc along a track to score damage.

It’s going to take some time and a lot of table space, but Space Cadets is so worth it. The game does such a tremendous job of connecting everyone’s actions together. If someone messes up, its impact will be felt across the entire team, which is actually a huge part of the appeal. When you succeed as a team, it’s one of the best feelings in the world, though failing miserably through a chain reaction of calamities is just as enjoyable and arguably more fun. Space Cadets may not have the Star Trek name attached to it, but it’s probably still one of the best Star Trek-inspired experiences out there.

XCOM: The Board Game

The alien threat hits a bit too close to home in XCOM: The Board Game. Like the video game its based off of, aliens are invading Earth and its up to you and your friends to stop them. Unlike the video game, where most of the action involves commanding a squad in a firefight with aliens, the board game takes a macro approach. With the board depicting a world map, you and your teammates will conduct research to build better weapons, intercept UFOs, defend your base and complete missions in hopes of ultimately driving them away.

This might not be the XCOM board game you were expecting, but it does what it sets out to do extremely well. Each player is going to be very busy managing their own aspects of the fight and every dice roll is filled with tension. What truly sets the whole experience apart is the required use of a digital app, which is used to manage a number of things, including the onslaught of enemies that will bombard you throughout. Besides being fun and thematic, the use of the digital app actually makes this board game a pretty literal sci-fi experience.

Buy XCOM: The Board Game Now From Amazon.com 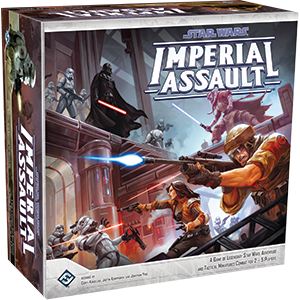 The final game on this list is one that could easily stand on its own for many board game nights. Star Wars: Imperial Assault lets you take part in the franchise’s signature lightsaber and blaster battles. If you’re playing with just one friend, you can partake in a Skirmish mode battle where each side can bring customized armies to battle. Or, if you’ve got the whole gang with you, play through the game’s beefy Campaign.

Imperial Assault does right by its Star Wars namesake by being a fantastic sci-fi dungeon crawl. Every character is carefully crafted to behave like a Star Wars character, while the combat and role-playing elements are top-notch. Best of all, the Skirmish and Campaign modes are so fleshed out that this is basically two games in one. When it comes to sci-fi goodness, it doesn’t get much better than this.