Star Wars: X-Wing Miniatures Core Set puts you in the cockpits of some of the most iconic ships in the galaxy. Whether you’re piloting an X-Wing or a TIE Fighter, you’ll be whizzing around in space, blasting enemy ships while evading oncoming attacks. Looking a a full setup of the game with a number of separately sold expansion ships is a sight to behold, but you’re only getting three ships in the base set. Is a three ship battle still one worth fighting?

It’s easy to get hung up on the number of ships in the box, but the X-Wing and two Tie Fighters look phenomenal. Built to scale and sporting a professional paint job, these figures might be the best components in any tabletop game out there. These are so good that I would gladly put them on display just because they look that good. All of the ships in the game attach to clever stands that can adjust in height while having slots to cleanly display ship tokens and ID tokens. Be careful with the tips of the X-Wings though, as those thin bits would probably snap pretty easily if bent the wrong way.

Besides the X-Wing and two TIE Fighters, the package also comes with just about everything you’ll need to start. This includes the maneuver dials, maneuver templates and a range ruler, along with a host of tokens, dice and cards. Two notable inclusions to this set are a series of ship cards and ship tokens. While each craft is bound by the same movement limitations, its other properties are dictated by the pilot. X-Wing Miniatures is designed in a way that allows for pilots of different properties to be attached to the same ship. For example, one X-Wing can accommodate either an unnamed rookie pilot or Luke Skywalker by simply switching the cards and tokens. It’s a meaningful way of adding variety, as each pilot can make a ship unique.

At the start of the game, players will start at opposing ends of the table with their ships close to the edges. From there, play breaks down into four phases: planning, activation, combat and end. In the first phase, each player will set the maneuver dial for each ship so that only one movement option is visible. Then, all movement dials are placed face down next to their corresponding ships. One at a time, in ascending order of pilot skill, players reveal their ship’s maneuver dial and complete the move with the help of the corresponding maneuver template.

After everyone is moved, combat ensues. In descending pilot skill order, ships can attack others that are within their firing cone. Attack and defense dice are rolled and the damage is calculated accordingly. Finally, after all ships have attacked, any sort of turn-specific tokens are returned and the planning phase begins again until one side wins the game.

There’s so much to applaud about the game’s mechanics and the components used to bring this game to life. Starting with the maneuver dials, each ship has a dial with unique movement patterns mapped to it. Because of this, ships will behave differently from one another. The personality of each ship really comes through as they fly around the table in different ways. 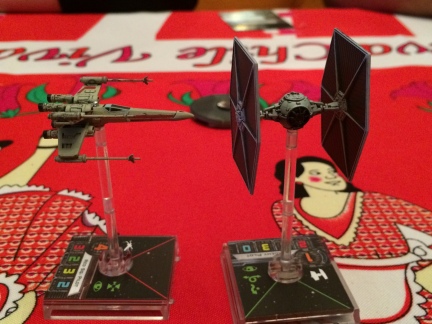 Once you’re ready to move your characters, the movement templates really shine. It’s such a simple solution for tracking movement without a board that I’m surprised that it’s taken this long for someone to come up with it. Adding to the ease of moment are the notches on the base of each ship, making it easy to lock ships in place as they move.

Combat is very simple when you play with the excellent quick start rules, but really comes into its own when you play the full experience. At the start of the game, players can arm their ships with secondary weapons that behave differently than their main blasters. Before the end of movement, players can perform character-specific actions that can help boost their ability to evade, focus, or even move out of the way of a potential attack with a barrel roll. During combat, fights are more dynamic than just attack and defense numbers, as the distance between two ships will impact the number of dice rolled. If you’re close to your target, you’ll get an extra attack die, though they’ll get an extra defense die if you’re shooting from far away. Some weapons even only work in certain ranges or require a lock on before firing, adding even more depth to the action.

One aspect of combat this is annoying is the fact that the game often requires you to roll more dice than what actually come in the box. In cases like this, you have to remember your starting values, re-roll however many dice you need, and then add those up for your combined totals. You can work around this limitation, though its annoying that it exists in the first place. One or two more of each die would have sufficed, but instead you’ll have to either deal with it, buy the extra dice pack, or buy a whole other starter set. 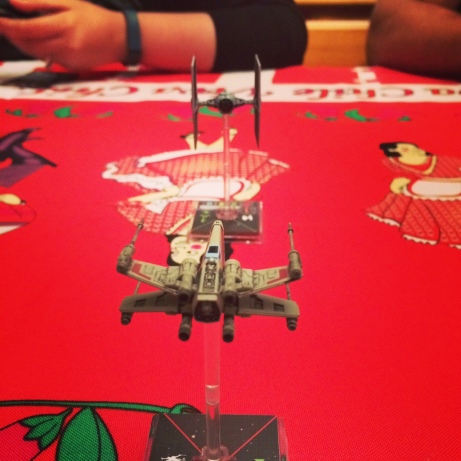 Speaking of, many X-Wing buyer’s guides I read recommended that players purchase two core sets to start. While I still find the notion to be preposterous, I see where they’re coming from now. The dice part is clearly a factor, as the core game could use a few more to cover the edge cases. There’s also the matter of the ships. On one hand, for the price, you’re getting three excellent miniatures and the core of a game that has expanded tremendously since its launch. On the other hand, it’s still just three ships and you’re going to hit a ceiling very quickly in terms of what you can do with them. Even the three extra mission types explained in the manual aren’t enough to sustain you for long.

As such, you’re going to have to buy more ships to get the most out of X-Wing. Expansion ships run the gamut in terms of packaging and pricing, from as low as $15 for one small ship, up to over $100 for a large behemoth. By buying another core set, you’ll save about $15 versus buying the ships and dice separately. I haven’t gone this route just yet, but I do own one extra X-Wing to facilitate four-player games.

There shouldn’t be any debate about the merits of Star Wars: X-Wing Miniatures as a game. Everything about its movement and combat have been excellently thought out, and its miniature ships are the best components in the business. The only real concern is the value of its base package. The game comes with barely enough to get things going in terms of ships and dice, and at a starting price point of about $40, it’s a bit steep relative to the amount of game you get. If you already have plans of buying more stuff on top of this though, then the value proposition argument is a moot point. Odds are, after you play it once, you’ll rush out to the store and fill out the rest of your fleets with A-Wings, TIE Bombers and the Millenium Falcon anyway.