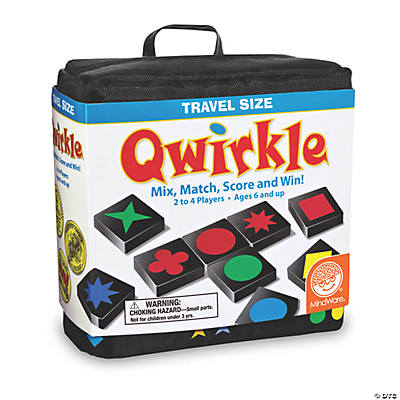 Start with Scrabble. Keep the tiles, but remove the board and replace the letters with shapes. Now you have Qwirkle. While this concept sounds strange at the outset, it’s actually brilliant when you think about it. By removing the board and the vocabulary barrier, Qwirkle focuses on the best part of Scrabble, which was the ways in which you could strategically place tiles in ways that garner the most points. Don’t you love it when you’re able to play one word that actually spells out two words because you placed them in just the right spot? That’s what Qwirkle is all about, without needing to memorize a dictionary.

For the purposes of this review, I’m covering the travel version. It happens to be the one I have, but it’s basically the same game as its big box sibling. The only difference is the travel game comes in a small bag, and the wooden tiles are smaller. That said, they’re perfectly usable and legible. If anything, I prefer the smaller version for ease of storage and portability.

The point of the game is to score the most points. This is done by placing one or more of your six tiles onto the playing area, building off of what’s already on the board. The rules for playing your pieces are fairly straightforward. You can build a line that features tiles of all one colour or a line featuring tiles of all one shape. That means you can build a row of five blue tiles, as long as every shape in that row is unique. You will score a point for each line you create or add onto with your tiles.

The other rule to note is that if you create a row of six tiles of one colour or one shape, you will score 12 points instead of six. This is called a Qwirkle. You’re going to want to take advantage of every opportunity to score in this manner as possible, but a savvy opponent is going to do everything they can prevent you from doing so. The back and forth that goes on between players trying to prevent each other from triggering a maximum scoring opportunity is a big part of the fun, as someone is bound to slip eventually.

Without the limitations that come with the board or letters, this really distills the fun of tile placement in that Scrabble style. You’re more focused on trying to place your tiles in ways that score you the most points rather than worrying about spelling or where the triple word score placement is. It’s most awesome when you’re able to score multiple Qwirkles in one turn by squeezing in your tiles in just the right spot. Since there are only six colours and six shapes to match, creating those multi-scoring rows is much easier than in the classic word game.

As simplified as the concept may seem, you’re going to want to think about where you place your tiles each turn for maximum points. Because of this, turns might drag a bit longer than you’d like. The game lists its play time at 30-60 minutes, and I would wager that most of my games were closer to the 60-minute mark. If time is a concern, there are a number of ways to tackle it. For one, you can keep your player count less than four players. Or, you could take out one of each tile. Unlike Scrabble, where removing letters breaks the balance of the game, removing one set would simply shorten the game. The length may be bothersome for a few players, though I’m fine with the wait as long as my opponents use the time to make quality moves.

Qwirkle takes the best parts of Scrabble and presents them in a package that is even more accessible than the classic word game. I greatly enjoy this one and am glad to have it in my collection. Even if it can take a bit long for my next turn, it gives me an opportunity to plot out my next great move. If you’re in need of a solid family game, or just love the tile placement mechanics of Scrabble, this is a game you should play.

I can’t stop staring at the Dark Samus Amiibo! 🎮 😍 #toys #toystolife #amiibo #nintendo #gamecube #retrogaming #samus #darksamus #metroid #metroidprime
‪#airhornx3! Better late than never? Time to finally give The Witcher 3 an honest try!‬ - ‪twitch.tv/inthirdperson‬ 🎮 🗡 ‪#twitch #livestream #witcher #witcher3 #ps4 #xboxone #netflix‬
‪Champ or chump? I test my my modern Tetris skills against classic Tetris on the NES!‬ Head over to my YouTube channel and check out the full video! - (link in bio) 🎮 🎮 ‪#youtube #tetris #classictetris #nes #nintendo #tetris99‬
‪Future CTWC Classic Tetris World Champion? In tomorrow’s video, I pit my modern skills against classic Tetris! Subscribe to the channel and hit the bell so you can get the video ASAP!‬ - ‪youtube.com/inthirdperson‬ (link in bio) - ‪#tetris #youtube #ctwc #classic #nintendo #nes #retro #retrogaming‬
‪What Wii U games are you still waiting for to get ported onto the Switch? I make an attempt at predicting one that could arrive this year!‬ Bookmark this for later when I’m proven right 😉 ‪🎮‬ ‪🤔‬ ‪#videogames #games #nintendo #wiiu #supermario #supermario3dworld‬
An up close and personal look at the new Dark Samus Amiibo! 🎮 😍 #amiibo #toys #nintendo #samus #darksamus #slowmotion #slomo