On November 4th, 2004, Vaughan Mills Mall opened its doors to the public. Located just across the street from Canada’s Wonderland, this shopping centre features hundreds of stores, a Legoland park and even a bowling alley. It’s a great place for shopping, but how is the Pokemon Go scene over there? 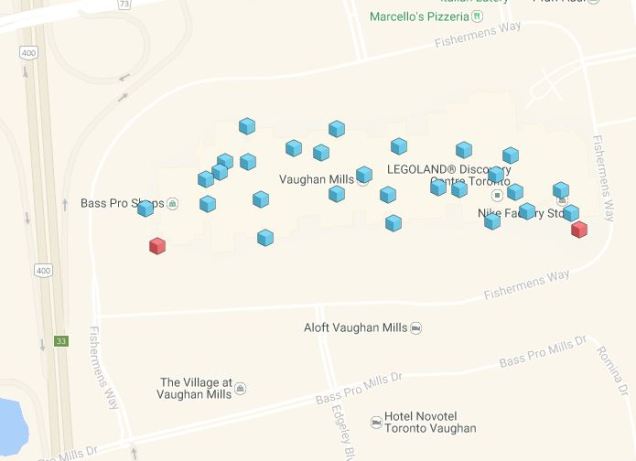 While you’re circling the mall, you’re going to come across many PokeStops. 27 to be exact. There are also two gyms in the mall for those that want to try their hand against the local competition. In theory, this would be a great place to stock up on items. For the most part, it is.

However, the south east end of the mall is pretty bad in terms of GPS tracking and internet connection. You’re going to have a hard time tracking your steps and collecting items from the PokeStops as your character stands still while you walk away. This makes getting about 20% of the stops a bit problematic, but you should be able to hit them all eventually.

As for the wildlife there, it’s pretty poor. Most of the stuff I caught from my trip there were the commons, such as Pidgey, Rattata and Spearow. I did catch a Dratini, but that seemed like more of a fluke than anything. Also, for being such a large mall, there are very few lures going at any given time, which is a bit of a disappointment. Then again, you probably wouldn’t pull anything great from a lure in that area.

For those looking to shop, Vaughan Mills Mall is a great place to visit that just so happens to have a lot of PokeStops. You can reload your bag pretty quickly with a few laps around the mall, but don’t go in expecting to catch anything great while you’re out there.