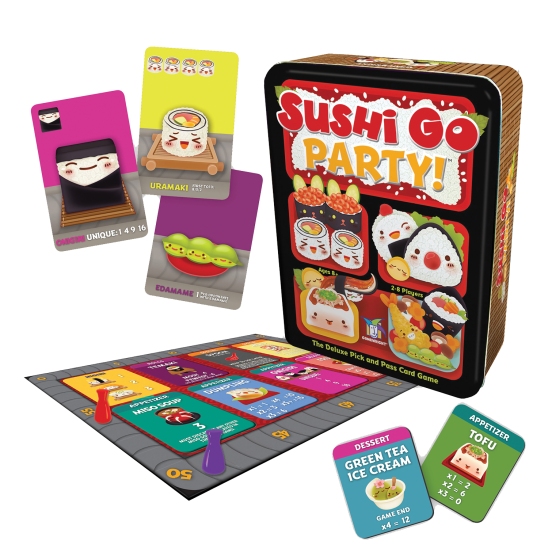 The sequel to the hit card game returns in a larger box and with more varieties of sushi to draft from. It also comes with support for up to eight players, versus the five of the original. This package is certainly bigger, but is it better?

As with classic Sushi Go!, players are challenged with drafting from a set of eight unique dishes in order to create the most delicious meal. After three rounds, the player who has accumulated the most points wins. This was very fun over the course of many plays, though the use of the same eight dishes every time could cause the metagame to go stale. With Sushi Go Party!, the game comes with 23 different types to choose from, allowing players to mix-and-match the cards in a plethora of different combinations.

All of the new cards introduce new ways of scoring. One of them is Eel, where the first Eel card you play deducts 3 points from your score, but you gain 7 if you can play another Eel card before the end of the round. Tofu is sort of the inverse of that, where eating one or two tofu will earn points, but three or more will cancel out any points you would have scored from them. One of my favourites is the Takeout Box, which allows you to convert cards that normally wouldn’t have been worth points into two points each.

The core gameplay is still fairly easy to grasp, but the extra cards go a long way towards making every game feel unique. By mixing up the cards, you’ll be forced to come up with new strategies every time. The additional depth comes at a bit of a price, as each game takes longer to set up while adding time to explain how each of the new cards works. It’s a bit of extra work, but it’s worth it in the long run.

Making setup and scoring a bit easier is the board that comes with the game. Slots in the middle of the board make it easy to see which cards are in play and how they work. Most useful is the score track along the outside. Previously, Sushi Go! did not come with any means of score tracking, forcing players to get out a pen and paper in order to keep tabs. Now that the scoring track is here, you can put the extra stuff away. In cases where you’re playing with large groups, the small spaces along the score track can get jammed pretty quick when there are ties, but it’s easy to work around and usually temporary.

Sushi Go Party! is a smart upgrade to the original. You can still play the classic version of the game with the cards present, while also creating a myriad of new variations to sink your teeth into. Support for up to eight players is also greatly appreciated, allowing the game to work in more scenarios. Unless you’re in a serious financial crisis and can’t afford the extra few bucks, you can skip the original and go straight for this new version.