Pocket Rumble‘s greatest asset is that it has excellent character designs from a visual and gameplay perspective. Even without any sort of lore within or outside of the game, these characters ooze with personality while giving players a ton of unique tools to battle with. Though the roster is small, there’s seemingly something for everyone here.

When I first started playing the game, I gravitated towards Tenchi, as he was essentially a Ryu clone with familiar tools that I could quickly grasp. However, once I set eyes on June, I knew this was the character I had to play as. Not long after, I climbed my way all the way up to #2 on the June-specific leaderboards and having a blast doing it!

This undead schoolgirl fits snugly in the zoning archetype of fighting game characters. Her tools are designed in such a way that she excels at fighting from a distance while suffering in point blank scenarios. If we were to compare her to someone else in the world of fighting games, her closest comp would be Dhalsim from the Street Fighter series. 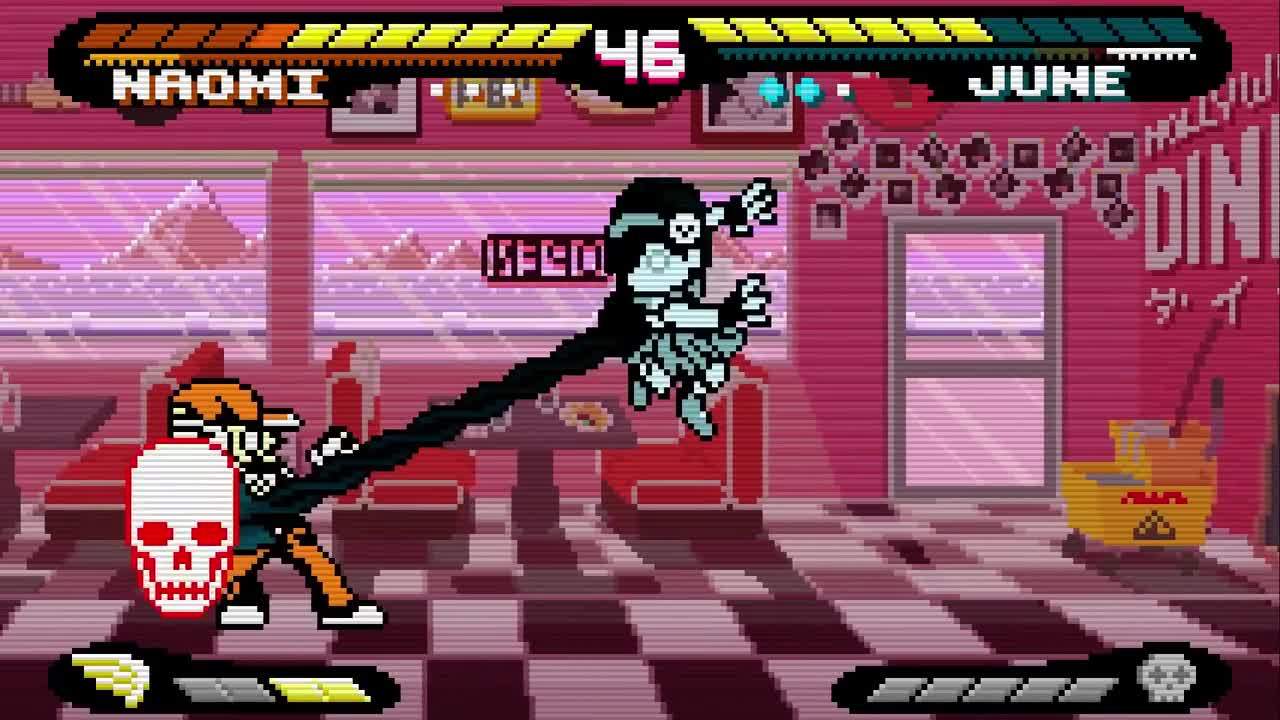 Traditionally, zoning characters do not fit the way I like to play fighters. I much prefer to aggressively charge at my opponents instead of hanging back and poking them away. With June, I’ve found a way to kind of get the best of both worlds.

In a neutral situation, her normal attacks do a great job of darting across the screen, poking her opponents from a distance while maintaining her breathing room. In particular, her downward-angled jumping L attack is fantastic for warding off overly aggressive foes, or smacking someone on the head when they least expect it.

However, if I have room to throw a fireball, it’s time to party!

In this first gif, I launch a fireball from full screen. Its slow flight speed and wavy trajectory covers my approach, allowing me to harass my opponent as I close the gap. Hector then panics, misses on an uppercut, and I punish with a combo.

In the second gif, I teleport dash in, stoping just short of my opponent to clip their kneecaps.

In the third, I cover my approach with a fireball and jumping L. Once I’m point blank, I simply throw them, as they’re still scared of me following up with an attack.

In this one, I close out the pressure with her Jaw Drop, which would knock down any opponent that is either jumping or crouch blocking. If they were stand blocking, I would be able to follow it up with a crouching L to clip their kneecaps.

If you want to get really cute, you can even teleport dash behind your opponent, allowing you to apply pressure from both sides.

As the icing on the cake, when her super meter is full, she creates a shadow that can repeat the last special move she performed. I don’t think she needs it to win, but its utility is crazy. Whether it’s used as a premeditated pressure tool, combo extender, or as a spur-of-the-moment defensive poke, its an incredibly useful ability to have in your back pocket.

When you put it all together, June is so fun to play because her move set gives her so much room for offensive creativity. From being able to teleport dash at any time, slow and hard-to-dodge fireballs that can cover your approach, to extended pokes to pepper your opponent with in ranges that most can’t counter through traditional means, and she becomes a nightmare that can strike at seemingly every angle.

That said, if she gives up her space and her cannon can’t get her out of a jam, she’s pretty much screwed. I’m looking at you, Naomi and Hector.