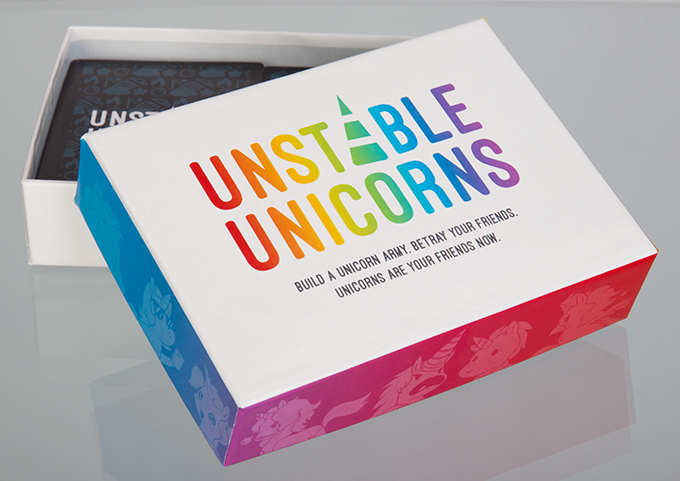 Ever dream about building an army of unicorns? Me neither. But if you did, or if the concept of doing just that sounds interesting to you, the Unstable Unicorns card game is here to save the day! Players race against each other in order to be the first to complete their army, while also attacking other players in hopes of keeping them at bay. Beyond it’s silly concept and cute art, is it worth waging war in this rainbow battlefield?

Each player will start with a hand of five cards and a baby unicorn card in front of them. The play area in front of them is called the stable, which will house your unicorns on the top row, and upgrade/downgrade cards on the row below. On your turn, you will draw a card, play a card, and if necessary, discard down to the hand limit. You can play a unicorn card, which will add to your score and possibly give you some sort of magical ability. You could plan an upgrade card on yourself in order to gain some game-breaking benefits, or play a downgrade card to cripple a rival. In case someone comes knocking at your door, you can even play a Neigh card to defend yourself or prevent someone from winning the game. After all of the unicorn madness, the first player to reach the score threshold based on the player count wins.

The star of the show is easily the art and the writing. There’s a lot of cute unicorns that adorn each card along with witty jokes. The first time through these will shine brightest, though I definitely get a sense that the humour will wear over a certain amount of time. Once the awe factor wears off, you get a decent “take that” game that incites a lot of action between players, as you’re constantly trying to build up your stable while knocking others down or defending your unicorns from impending destruction.

Fundamentally, the game seems fairly well balanced, as we never did get into a rut where everyone was at a stalemate. However, it does feel like the game drags on a bit too long. I think the main hurdle is that the winning conditions felt a bit too high relative to the level of effort required to play the game. Furthermore, for your first few playthroughs, you’re going to have to read the effects of every single card as its played, as it’s not immediately clear what an “Attractive Narwahl” or a “Stabby Unicorn” will do in the game. On the box, it’s listed at taking 30-45 minutes. While accurate, I think this game wears out its welcome by minute 45 as the last card is played and everyone has finally burned any cards that could have stopped it. After your first play, I would house rule it down to a level where you could wrap this game up in 15-20 minutes instead.

For players who are looking for a logical next step from Exploding Kittens, Unstable Unicorns is a logical next step. You will get a similar sense of laughs from the card and its gameplay, while also sinking your teeth into a game with a bit more depth. If it seems to run too long like it did for us, definitely consider lowering your score cap.