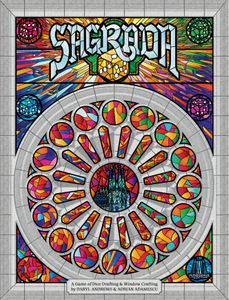 Inspired by the unfinished Catholic church of the same name in Barcelona, it’s now your time to finish the job in Sagrada the board game. Players will each build a stained-glass window to display at the church with the best window being declared the winner. Do you have what it takes to design a masterpiece?

Off to the side, you’ll place the public objective and tool cards. The former will give players bonus points for achieving the feats listed on the cards, while the latter allows players to break the rules of dice placement by spending favor tokens on a specific card. While players who try to use the same tool card will have to spend more tokens to get the same benefit, you also gain points from having more favor tokens handy at the end of the game. Only use the tool cards if you really need them!

At the start of each round, a certain number of dice depending on the number of players is drawn and rolled on the table. On your turn, you will draft a die and place it on your window card. There are a few rules to abide by when placing your dice to note.

If you’re in a jam and you can’t legally place a die, you could spend favour tokens on a tool that will allow you to make a legal move. If the tools can’t help you, then you must discard the die. When all the dice are gone, the round is over and the dice on the centre of the table are refilled from the bag. After 10 rounds, the player who has the most points based on how well they completed their window and any public and private objectives they completed wins the game.

There are a lot of parallels to draw between this game and Azul, another placement game with a similar theme of building a visually-appealing tableau. While Azul probably have more depth, Sagrada was a much smoother experience. Primarily, there are less mental hoops to jump through, as most of the rules make sense within the context of the task you’re mimicking. Unlike Azul, which only lets you take certain tiles from factories, and forces you to place upwards of five tiles on a separate row before adding a single tile to the actual wall, in Sagrada, you pick the piece you want and place it in your tableau with little fuss. Yes, there are rules you need to obey, and the drafting and dice rolling can make it very difficult at times to make legal moves, but it’s much easier to pick-up-and-play while still giving players the sensation of building something cool.

I enjoy Sagrada. It finds a great balance of accessibility, strategic depth, and thematic integration that makes this a cohesive and enjoyable game to play. After each game, your end result will almost always look cool, I guess unless you fail to follow the rules and have a bunch of holes, but that’s part of the fun. More hardcore players may want to play Azul for a similar vibe with more depth, but Sagrada is the better pick for a broader audience that wants that sensation of building something with visual appeal while they play.