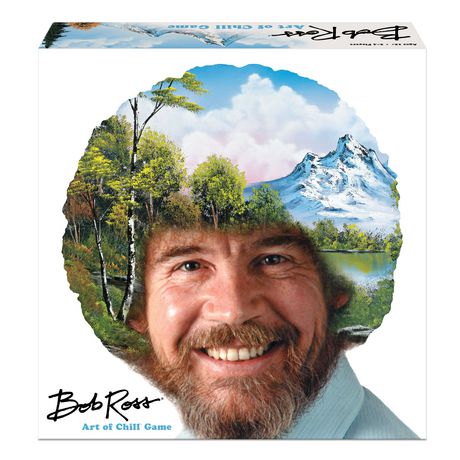 Long after his passing, the legacy of Bob Ross continues to shine. Episodes of his show The Joy of Painting are still popular online decades after its television run ended in the 90s. Though I don’t think anyone imagined that his work would have an impact on the board game world, there are two in his name as of writing.

Bob Ross: The Art of Chill does not involve any actual drawing or painting. You’ll want to play Bob Ross: Happy Little Accidents for that type of experience. Instead, it is a strategy game that loosely simulates the experience of painting alongside the legend himself. Can you keep up with Bob Ross and achieve maximum chill? Or at the very least, make the most of your happy little accidents?

Placed in a position where everyone can see it is an easel with a randomly-drawn painting card. Besides being there to gawk at, it serves as your scoring objectives and as Bob’s progress track. Each painting has three major features to complete, which could include happy little trees, wondrous water, almighty mountains, and more. As you successfully complete painting each feature, you’ll gain a point for each colour of paint you use to complete that feature. There are also opportunities to gain bonus points if you one of the first to finish that feature amongst your peers, if you used a Technique to complete it (more on that later), or if you manage to paint that feature before Bob does.

If you’ve ever watched Bob, you’ll know that he’s able to whip up a majestic painting in a matter of minutes. His speed is reflected in-game through a die roll. At the start of each turn, players will roll a die to see if Bob makes any progress on his painting. If he doesn’t, you’re usually rewarded with an extra action of some sort. If he does, the Bob token moves from left-to-right along the track at the bottom of the painting. As he passes the landmarks along the track, he takes away their bonus points. If he reaches the end, players are forced to move onto a new painting, whether you finished or didn’t.

Though Bob’s progress adds stress to the game, he’s not an entirely bad guy. Each time the Bob symbol is rolled on the die, he activates a new Chill card. This gives all players a nice game-altering rule that makes things better for you in some manner. They’re a nice touch to keep players on their toes while taking the negativity off of Bob moving forward.

Bob is quick, but that doesn’t mean you can’t squeeze in a few features of your own. After rolling the die, you get three actions. You can perform any number of the following on your turn within that set of three actions:

Art Supplies cards feature both a paint colour and a paint brush on them, but they can only be used as one or the other. Once you spend an action to put that card on an easel, you commit to it being used as paint instead of as a brush. The general flow of the game is that you’ll put the appropriate colours of paint on your easel, then cash them in with the right brush to score the points for that feature on the board.

Techniques are cards that give you permanent access to a specific paint or brush. Once they’re in your possession, you won’t have to play an equivalent card when you cash in for points. You also gain a bonus point for using them. However, you do lose an action and two cards in your hand in order to get them. It’s a risk, but it could be the difference that helps you score 30 points first to win the game.

The mechanisms of drafting and resource management are implemented in a really clever way with Bob Ross: The Art of Chill. While I didn’t necessarily feel like I was painting a beautiful landscape, it does kind of feel like you’re at least going through the process. From gathering supplies, to applying the paint to your easel, to painting the feature, all the steps are there and they tie in real well with the theme of the game.

Having Bob paint along with you is a really nice touch. Thematically, of course Bob is probably painting faster than everyone else. From a gameplay standpoint, Bob may not move every turn, but he’s probably still going to finish before you do, which makes it really important for you to focus on the right features, get the right cards and play them at the right time.

I also appreciate the accessibility of this one. The combination of straightforward gameplay mechanics along with a theme that makes real world sense makes this one pretty easy to grasp. In terms of complexity, this one is about at the same level as a game like Ticket to Ride or Splendor. Not necessarily saying that The Art of Chill is better than those two, but it does scratch a similar itch while lowering the barrier-to-entry thanks to your in-game actions having clearer real life parallels.

Never thought that I’d see a Bob Ross board game, especially one of the strategy game variety, but I’m glad Bob Ross: The Art of Chill exists. Intelligently blending tried-and-true drafting and resource management mechanics with the process of painting works surprisingly well. Even for those who may not be familiar with his work, it’s still a fun strategy game with a great theme. Bob Ross: The Art of Chill is a solid game for anyone looking for something with a bit of strategic bite, while also earning brownie points from anyone who admired his work.

Buy Bob Ross: The Art of Chill Now From Amazon.com