Steff and I have big dreams for this basement of ours. We want to rip out the carpet, update the walls to anything other than wood paneling, and knock down the dividing wall so that the basement is one large space. Someday, we envision it being a larger entertaining space.

In light of these plans, I’ve been reluctant to decorate down here. Didn’t want to go through the trouble of putting things up, only to have to duplicate the effort after the room has been renovated. As such, the only real decor you’ve seen of my streaming room until recently was a large Snorlax bean bag chair.

However, a couple of things have happened since we came up with our future vision for the basement. One, our priorities around the house have shifted to other projects. Two, I started taking streaming seriously. Part of taking streaming seriously is ensuring that everything you see adds to the overall experience. Snorlax is cute, but I’m no longer content with using an empty wall and an oddly-placed divider curtain as my backdrop. Recently, I finally decided to spruce the place up a bit. 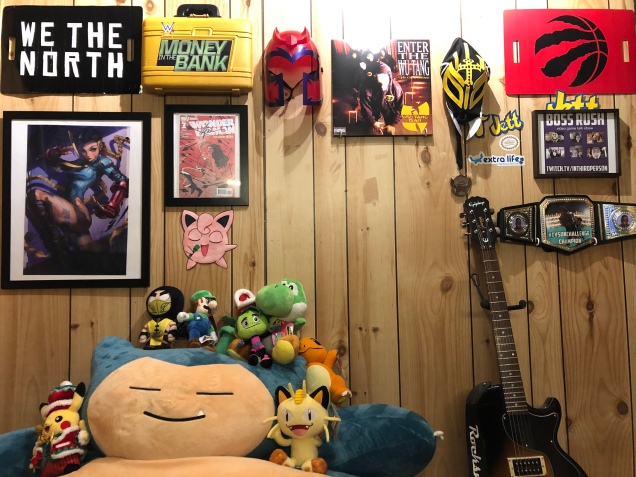 Finding enough pieces to decorate the wall wasn’t that difficult. In our previous home, our gaming room had a ton of framed pictures, comic books, and other nerdy merchandise. Almost all of that stuff has been sitting in storage ever since. As a starting point, I drew from the pieces I’ve amassed over time.

The real challenge was figuring out how to best decorate this wall as a streaming backdrop. At just over six feet wide, it’s not a lot of real estate. Also, with my camera’s field of view, you don’t see all the way to the floor or the ceiling. Throw me in front of the camera, and there’s a dead zone behind me where decorations wouldn’t be seen. However, if there are items that are kind of peeking out behind that dead zone, it could add some weird shapes to my silhouette, taking the focus away from me.

And for the pieces I do pick, they need to show up well on camera. I reworked my layout so that my webcam now takes up the full view, giving you a wider window into my world. One thing that didn’t work was trying to display a framed photo of Crap Charizard (TM). Unfortunately, the drawing’s thin lines made it essentially impossible for the camera to pick up. I would swap pieces in and out to see what worked in this regard.

Beyond all of the functional considerations, I wanted the space to be reflective of me. I wanted pieces that represented my interests within and outside of gaming, as well as references to the stream itself. It’s a lot to ask for in a relatively small space.

As I started to map out where things could go, I decided on taking a modular approach to certain aspects of the wall. For example, I have a number of pieces of framed art that are all the same size and orientation. Instead of trying to squeeze multiple large frames into the shot, I decided to hang one-at-a-time, rotating between pieces. For now, we’ve got a picture of Cammy from her Street Fighter Alpha days, but I have other gaming and non-gaming pieces to display in this spot.

Ditto for the comic frame. To start, I had to go with my autographed New 52 Wonder Woman #1. This was my introduction to Diana Prince and it’s still one of my favourite runs in comics! I also had a memorable interaction with writer Brian Azzarello when he autographed this for me at Fan Expo a few years ago, making it even more special. I have many more comics to cycle through, so I’m excited to share them with you over time!

As a nod to my love of music, I’ve got a spot on the wall where I can swap in vinyl. Most of my music is on CDs, and those are too small to appear clearly on camera. I only own one record, but it’s a doozy. Enter the 36 Chambers by the Wu-Tang Clan changed my life in the 90s and is still a hip-hop masterpiece to this day. At some point, I’ll pick up more vinyl to display on the wall, but I do have access to Steff and her dad’s records as well. Of course, I’ll pick music that I enjoy and not simply use the space as bait. Quiz me on it if you don’t believe me!

Not going to explain every piece on the wall, but here’s a couple more worth highlighting. I bought a championship belt with the vision of temporarily using it as the #tysonchallenge title before eventually redecorating it to be the Boss Rush belt. However, the final belt looked so good, I couldn’t part with it. It now resides on the wall in Mat’s honour, though someone may win it from him during out next Extra Life marathon! 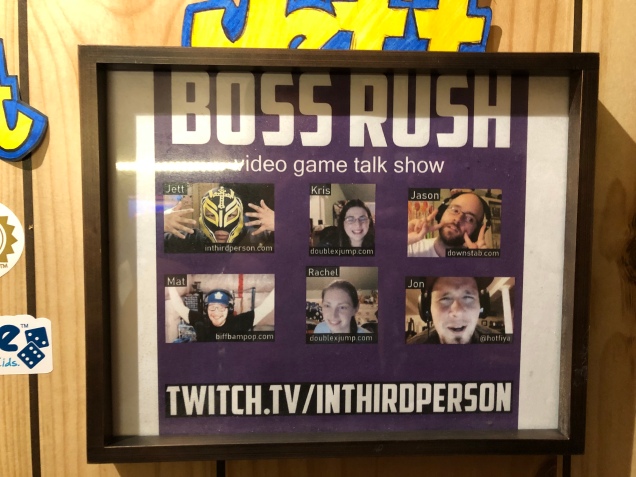 Speaking of Mat (and Jason, Jon, Kris, and Rachel), of course I had to have the whole Boss Rush family represented on the wall somehow. Currently, it’s our Boss Rush promo photo, but I’ll probably play around with that too. Wolverine Mat? Kawaii Jason? Poker face Rachel? Shocked Kris? A map of Africa for Jon? I’ve got options. 😉

Off-camera, the concentration of decorations looks a bit odd, especially when the rest of the room isn’t decorated yet. On-camera, it looks a lot more of like home. Hope it makes our time together more enjoyable!