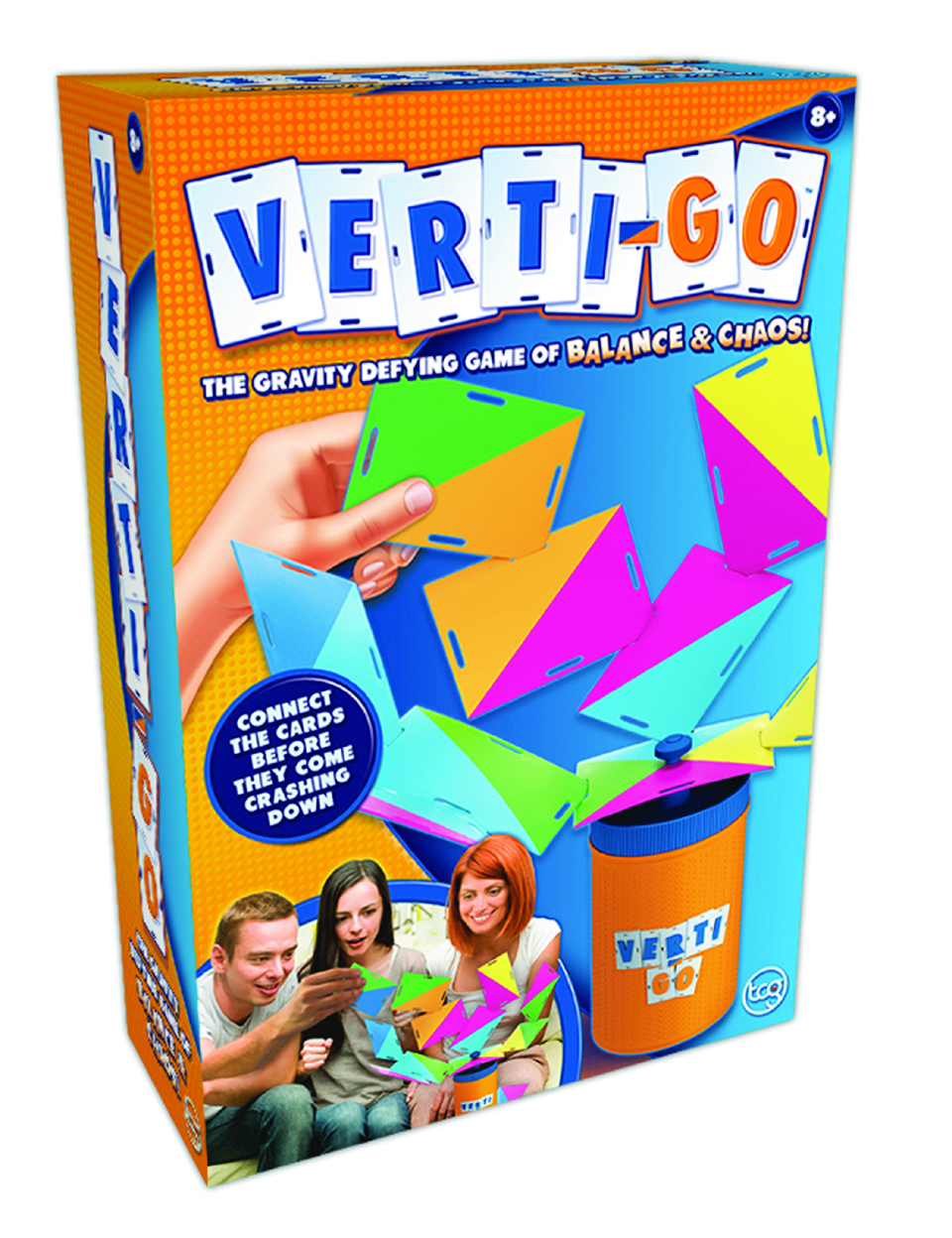 The sub-genre of tabletop games where you stack things until they fall over goes deeper than Jenga. I’m not throwing any shade at the classic, but it’s so ubiquitous that I feel like many don’t know anything else beyond it. For example, Animal Upon Animal is a fantastic alternative, where players stack animal-shaped blocks on top of each other. Another game that’s attempting to topple the Jenga empire is Verti-Go. Does it have what it takes to carve some time out of your schedule to give it a chance?

Two-to-eight players start the game out with an equal set of cards. Each card is colour-coded with two different colours, while also having a slit along each side. At the centre of the table is a closed can with a card pinned to it, lying parallel to the table. On your turn, you will place a card into the base card, ensuring that the colours match. Your goal is to get rid of all of your cards before anyone else to win the game. However, if you drop your own card, you lose your turn. Worse yet, drop two or more, and you’re eliminated from the game.

When players get on a roll, the structures you end up creating look really cool. The cards are of a thicker stock, allowing them to hold their form and bend a bit without them folding under their own weight. The way in which the cards interlock also create some interesting challenges while giving you some creative freedom to either make the safe move or gamble it all on a wild connection.

That said, the cards can feel fiddly. Maybe it’s just my lack of experience, but the open-ended nature of how the cards connect and the varying strengths in which they hold together can make for situations where it’s not entirely clear if the move your going to make is safe or deadly. Sometimes, cards will stand almost upright, with the corner of the recently-placed card lodging deep into the hole. Other cards will connect almost horizontally, with both cards essentially lying flat while barely holding it together. I know Jenga has its risks, but this at times feels much harder to gauge what will work and what won’t in Verti-Go.

I also take issue with the game’s default rules. Eliminating players from the game after knocking down two or more cards in a turn is a steep penalty for something that’s can happen really quickly in this volatile game. On top of that, the game’s rules don’t scale particularly well for the recommended two-to-eight players. In a two-player game, each player gets 16 cards, which is way too many, especially when the stack will fall long before one player runs out. In an eight-player game, each player gets a much more reasonable four cards, as the total number of cards doesn’t change regardless of player count.

Though I don’t like to use house rules for games, I feel like there are simple tweaks you can make to the game to make it more enjoyable. I personally enjoy adding Animal Upon Animal rules to it, where knocking down two or more cards simply forces the offending player to collect two cards of their choice while discarding all fallen cards from play. This penalizes the opposing player without having to go to the extreme of booting them from the match. You can probably come up with other ways to make the game suit your needs better.

Visually and conceptually, Verti-Go is a really neat alternative to Jenga. The way in which the cards connect together creates a colourful blossom that can be expanded upon in many ways before it all falls apart. When the group gets on a roll, it’s great to see the cards expand and bend before ultimately falling in a heap. However, its overly-punishing rule set undermines the flow of the game, especially considering how volatile the structure can be and how much player elimination sucks. If you’re willing to deviate from the written rules, you can fine tune Verti-Go to be a decent experience.