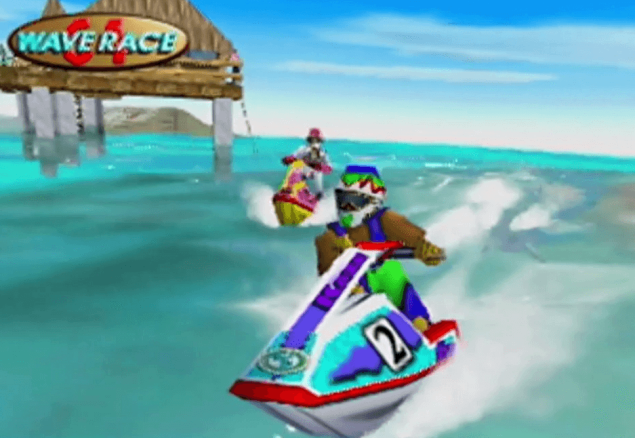 Before Nintendo put all of their racing eggs into the Mario Kart basket, they were rather adventurous with their forays into the racing genre. One of those Wave Race 64. At the time, I vividly remember the game wowing me with its realistic water physics and simulation of Jet Ski racing. Does it still float after all these years?

Released in the early days of the Nintendo 64, I’d never played anything quite like it. Racing at the time was mostly relegated to ground-based vehicles like cars, making the experience of driving a Jet Ski over water was new. Not just in the sense that the on-screen vehicle was different, but the overall feel of the game was tuned to more closely resemble how a Jet Ski would behave on water.

The H2O is the true star of the game. Depending on the difficulty you choose, the way in which the water moves has a dramatic impact on the way your Jet Ski moves. On the easiest difficulty setting, navigating the mostly-still water still feels different from driving a car on pavement, particularly in the way that you tackle corners. You need to turn sharper than you normally would with a car, but if you carve too sharply, you’ll go flying off your Jet Ski.

Ratchet up the difficulty and the motion of the ocean dramatically changes each race, even if the actual courses themselves don’t. What was once still water transforms into ripples or massive waves, completely changing the your approach. Finding the right grooves in the water as you skim across the low points and take jumps off of waves or ramps is an exciting challenge to face. Though there are only eight courses in the game, the drastic impact that the three wave variations have on each course essentially triples the amount of courses available to you. 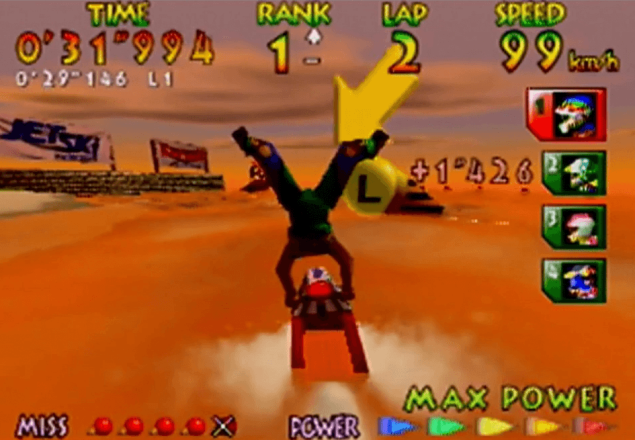 Beyond the water, the game still looks pretty good. There are nice little touches where you’ll see dolphins swim with you or birds flying by. I always really liked the industrial course that adds a lot of metal to mostly-natural scenery. Most surprising to me was that the game still runs at a steady frame rate, even with two-player split-screen. That said, the graphical detail is dialed down considerably in split-screen in order to make it work as well as it does.

Unfortunately, the game caps out at two-player multiplayer. Four would have been amazing, but I’m guessing the extra horsepower went to making the water physics work. Still great to race with a friend, though having support for four-player would have helped this game’s staying power tremendously. 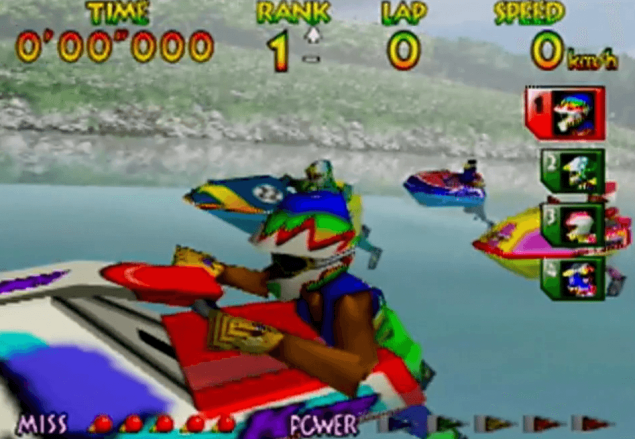 As somewhat of a consolation, the game has a stunt mode. Tasked with earning a high score by driving through rings while pulling off an assortment of tricks, from flips, to handstands, and more. Not necessarily a mode I would put much time into, but the trick system in the game is pretty decent, and again, finding the right lanes in the waves goes a long way towards squeezing out high scores.

Decades later, Wave Race 64 largely holds up. Partially because there have been so few Jet Ski racing games to compare it to. But mostly because it’s still a fun racing game that provides a unique challenge. It’s weird in a way to celebrate water physics as the hero of a game, but that’s what truly sets this one apart. With only two-player multiplayer and not much in the way of single-player content besides a grand prix, it may not hold your attention for too long. However, you’ll have a great time catching the waves while you’re in the area.