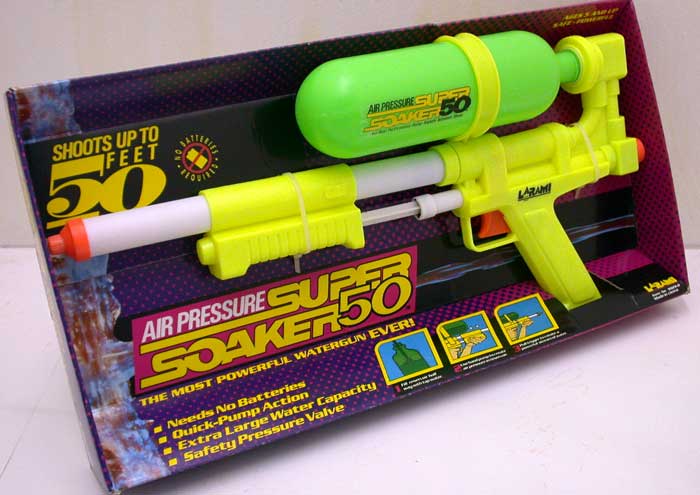 When I think back to my summers in the early 90s, it doesn’t get more iconic than the Super Soaker brand of water guns. In an era where most water guns were little pistols that only shot in short spurts, the Super Soaker revolutionized childhood H20 warfare. With each one possessing a large reservoir and the ability to shoot a continuous stream at a long distance, this was the true beginning for the water guns arms race in my community.

Without any real coordination on our part, the neighbourhood kids were all gathering at the park with their Super Soakers at the ready. Even though the end result of us all getting wet was the same regardless of how we did it, water fights with the Super Soakers felt way more legit. In retrospect, it was one of the first status symbols I could remember mattering to me in my lifetime. During that stretch, none of us would touch any water guns that weren’t Super Soakers.

At some point during that first summer, I would win a Super Soaker 30 through a colouring contest. In case you were wondering, I finished 3rd. During particularly-heated water fights, I would keep the 30 tucked into my shorts, though the weight of the gun would constantly pull my shorts down. As such, I’d battle with one hand on the trigger of the 50, and the other hand holding my shorts up.

Newer models would get released and I fawned over all of them. I would end up adding the Super Soaker to my arsenal. The grip at the tip of the barrel rotated the nozzle, allowing me to shoot at a 180-degree radius. Perfect for sneak attacks around fences! In actuality, this extra feature wasn’t that useful, but it was one more gun to battle with without having to reload.

Even with a decent collection, I fawned over the guns I didn’t have. Newer models shot thicker streams of water with a higher pressure. Of those holy grails, the Super Soaker 300 sat at the top. This monstrosity had a backpack reservoir, which easily made you the scariest kid on the block. I never saw one actually in action, but I ogled at them every time I went into Toys R Us. I don’t remember the price of this model, but I believe it was north of $100 at the time. Decades later, I’d still love to have one just to cross it off the bucket list.

Once we aged into puberty, the water fights just stopped. With my friends and I now fully-occupied with video games, sports, and the awkward first steps into the world of dating, the urge to spray each other with water dried up. I haven’t really messed with water guns since, but I’ll always cherish the time when the water wars were the focal point of our summer fun.