As I watched Nathan Salmon create a pair of amazing art pieces with spray paint for me, two thoughts swirled through my mind.

Though I figured that I wouldn’t be able to make the Ninja Turtles pose in front of a city skyline anytime soon, the fundamentals of creating planets, space, and stars seemed doable for a hack like me that’s never spray painted anything in his life. After watching a number of tutorial videos on YouTube, my wife and I bought a bunch of supplies and dedicated an afternoon to creating some spray paint art of our own.

With this first painting, I wanted to keep it simple. The goal was to just paint a planet in space surrounded by stars. Of course, that was easier said than done.

One of the mistakes we made occurred before we even began painting. We took advantage of a sale on canvases at Michael’s, but realized after the fact that this wasn’t the best surface to spray on. The porous fabric requires a lot of paint to cover. You can see it in this first attempt that the black coverage is thin and the colour saturation on the planet isn’t as vibrant as I would have wanted it to be.

Even so, I’m proud of this as a first try! I executed on the idea of the planet having a light source, as the planet is lighter on one side and darker on the opposite end. Also, I think the milky way swoosh worked out surprisingly well! In order to do it, you just have to take a quick swipe with the paint. Pulling that off gave me confidence going into the latter paintings.

Having watched Steff paint three planets at once in her first painting, I decided to try and go for one planet and one moon. The black came through stronger and I think the moon looks great. I wish the blue colour came through a bit better on the planet, but it still looks alright and I have to make pieces like this to develop my skills for the masterpiece I might make in the future. 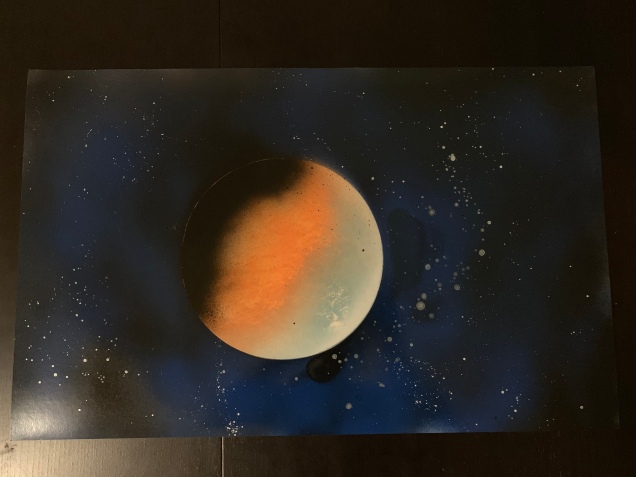 We took a quick break in order to buy glossy Bristol board and more spray paint colours. The change was dramatic. Besides being way cheaper, it takes much less paint to cover and the colours really pop on the board.

This time, I tried to mix colours. Went with a multi-coloured planet that features shades of orange and blue. I also went for a two-toned space, which required me to dual wield cans and spray at once. I won’t point them out, but there are two spots where the paint pooled weird and no amount of paint could fix it. Otherwise, this one looks pretty cool. 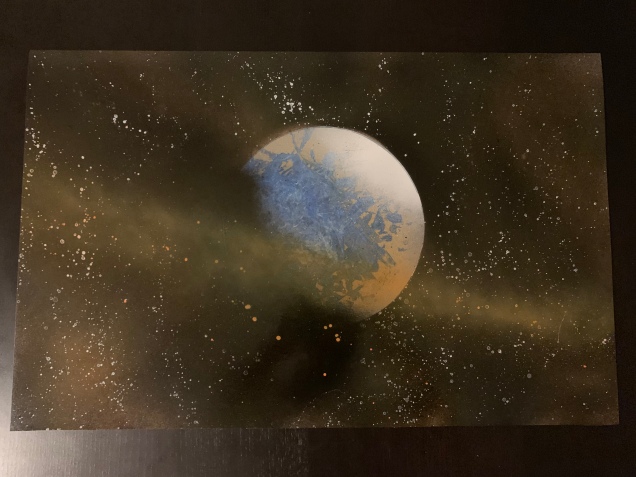 Another shot with multiple colours. Love the mix of black and orange in space. The orange streak is a nice touch too. The planet didn’t turn out the way I hoped. Mixing blue and orange, the distribution of the blue is very uneven. I like the overall effect of this one, but I keep thinking about what could have been.

Just before we started painting, we watched a tutorial on how to paint clouds. Cutting out a stencil and spritzing lightly, it was magic how the clouds came to life. When I cut out my stencil, it came out way more angular than I would have hoped, making me reconsider the thought of trying the technique.

Either way, I wanted to create the of a moon over the sky. Starting with the moon, I then sprayed the three layers of colours that would fade into each other. Without the clouds, it felt empty, but I was scared that my attempt at clouds would ruin it.

Paralyzed by fear, Steff took a scrap piece of paper and sprayed it blue. She told me to try it out. Though I felt like the clouds were a bit too angular, it still looked pretty good on the test sheet. Decided to go for it on the actual painting and I wasn’t disappointed!

Of the paintings I made, this one is my hands-down favourite. So much so, that I have it hanging on my streaming wall right now!

So glad that my curiousity took my wife amd I to this place. Spray paint art is so much fun and the art one can make with minimal skills still looks really impressive! With the weather cooling off, Steff and I may not have that many more opportunities to paint this year. Hopefully we can squeeze in a few more sessions before then and make more cool stuff!

Mew VMAX loses to Surfing Pikachu!? I couldn’t believe it when I pulled off this massive upset! When was the last time you scored an upset victory?
That was too close!
Which would you rather have?
We tried Tim Horton’s x Justin Bieber Timbiebs! Here’s my ranking of the 3 flavours:
Spending tonight (and the next few nights) preparing Extra Life rewards for you amazing donors who went above and beyond! Trying my best to get these out by early-mid December! Will keep you posted on my progress.
Throughout the month of December, I will place an ornament with your name on my Christmas tree if you manage to get a Shiny Snorlax with your Channel Points! Help me decorate this tree starting on Wednesday!