In this two-player deck-building game, each player receives a starting hand of 10 cards. This mix of spells, items, and an ally are used to help you generate one of the game’s three resources: Influence, Attacks, and Hearts. Influence helps you add new spell, item, and ally cards to your deck from the classroom or library. While books are cheap, some items are quite expensive, and adding Harry Potter to your deck is going to cost a fortune. Spend wisely! 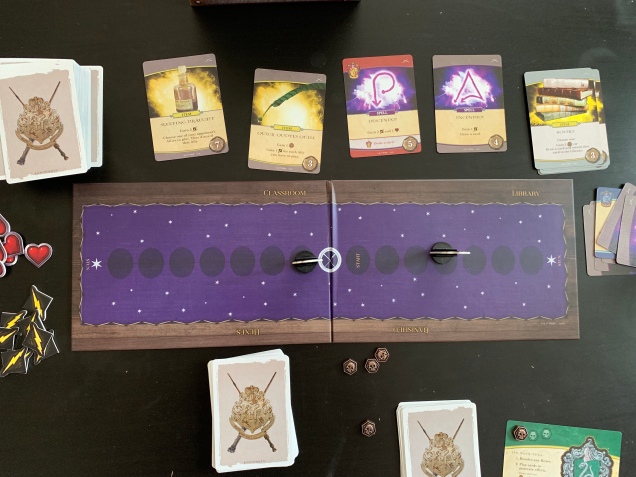 The Attacks and Hearts impact the movement on the board, located at the centre. This board represents where each student is within the class as the battle rages on. Each time they get attacked, they’re moved a step back. However, they can regain their footing and move forward by spending hearts. If they get pushed back to the edge of the board, the student is stunned and the round is reset. You still keep all the cards you’ve accumulated so far, but the pawns are moved back to the centre of the board and the stunned player takes a stun token. First player to stun their opponent three times wins the game.

If you’ve ever played a deck-building game before, you will feel right at home with the game’s core mechanics. Draw a hand of five cards, play what you can in order to generate the most resources, and trash as much of your starting hand as you can to get your good cards at a higher frequency. It’s very similar to other deck-builders on the market, which may be a turn-off if you’ve played a number of games in this style.

However, there are a few new wrinkles that I appreciate. Having tokens to represent your resources is a really nice touch. Being able to hold three hearts is a lot more convenient than reading through every card you played and adding up each reference to a heart. Using the board as a scoring track of sorts is also a clever touch. Combined with the theme and the tokens themed after each house, it kind of does feel like you’re in a battle, trying to push your opponents off the board.

Speaking of houses, the game also has a bonus system for playing cards that are the same as your own house. Anyone can use any card or ally, but if you play a matching card, you’ll get a bonus. It is in your best interest to stack cards and allies from your same house, which can change the way you approach your purchasing decisions. Even so, it might be odd to have Draco Malfoy cheer on a Hufflepuff student, but he’ll still provide the Hufflepuff student with some benefits.

If you’ve never played a deck-building game and love Harry Potter, this is not a bad place to start. The rules are fairly straightforward and you don’t have to worry as much about long-term strategy beyond what cards to buy. From turn-to-turn, you have to spend all of your resources anyway, so you can spend most of your time focusing on what you have to do in the moment. It also ties the theme of two wizards battling very well with the gameplay. 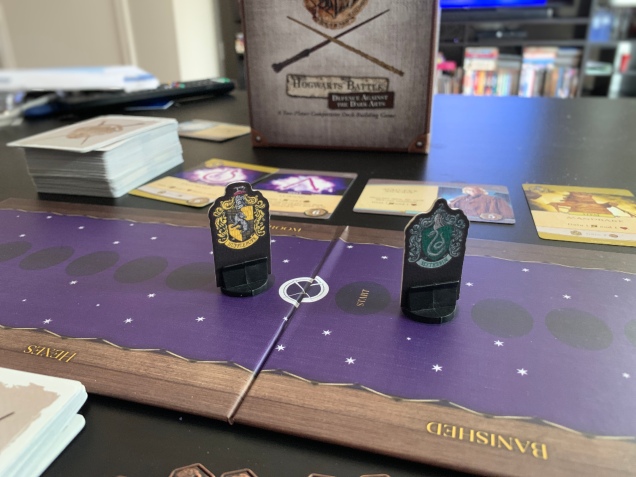 Where the game is going to stumble for anyone looking for a game truly balanced for competitive play is in its level of randomness that can arise. With only four cards available for purchase at a time, and with random cards being added from a very large stack as cards are purchased, the spread can unevenly favour one player over the other. Games like the popular DC Deck-Building Game or Ascension have a similar setup, so it’s not unprecedented.

As play progresses, players will build decks that are capable of dealing a ton of damage in one turn. Heck, it’s not impossible to create a hand that will knock out an opponent in one shot. Some battles may be drawn out affairs, but winning can really come down to just drawing the right hand at the right time. I still enjoy the theme of battling and the journey that comes with building a formidable deck, but you probably won’t be able to prove your superior wizardry over your opponent with any real consistency.

Harry Potter: Hogwarts Battle – Defense Against the Dark Arts is a solid two-player deck-building game that does a decent job of capturing the feel of two wizards battling. It plays very smoothly and shouldn’t be too difficult for first-year wizards to figure out. While it may not hold up to the scrutiny of the most competitive of players, it’s an enjoyable deck-building experience for two players who want the Harry Potter vibes.