From my life-long fascination with Tetris, to my love of the quilting-themed tile-placement game Patchwork, I seem to have a thing for arranging blocks into neat formations. NMBR 9 is yet another game that challenges players to arrange and stack blocks in order to gain the most points. Using interesting shapes and a unique scoring mechanic, does its take on a well-worn concept add something new to this gameplay mechanic?

Two-to-four players will compete against each other in this abstract strategy game as they try to build the structure that generates the most points. The pieces you’ll use are shaped like numbers from 0 to 9, while a deck of 20 cards representing two of each number are shuffled and set face-down at the centre of the gable. 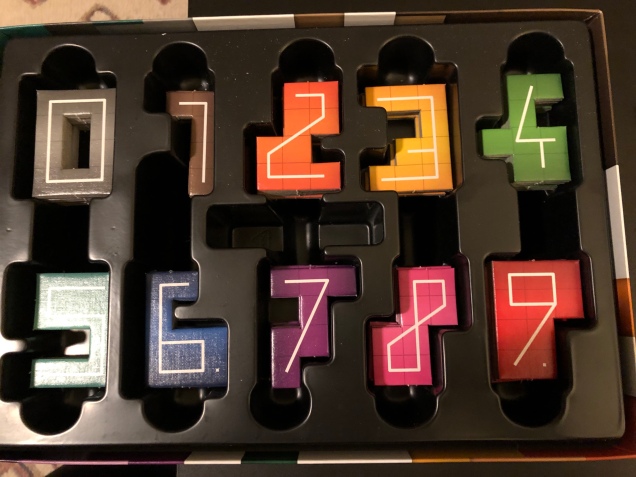 One-by-one, a card is drawn, and all players will grab a tile of that number. From there, each player will place it on their own tableau. After the first piece, you can place pieces adjacent to one-another as long as at least one side is touching and the grids line up. You can also place pieces on top of one another, as long as the higher piece overlaps two or more pieces, while also having a solid foundation below it. No overhangs or gaps allowed.

Height is key. Points are calculated based on the number of the tile on that level, multiplied by that level. So for example, any tile at the bottom is counted at level 0. Therefore, your lucrative 9 tile is still worth 0 if it’s placed at the base. Each level adds a multiplier of one, so you want to get as many high-value tiles at the top of your stack.

Easier said than done, of course. By virtue of the draw being randomized, you constantly have to make a call on whether you use a piece to solidify your base, or use it to score points on the higher levels. You can try to build your entire strategy around placing the 9 at the highest spot, but what if both 9s are drawn early? Every turn is going to flex your brain muscles in this regard, and there’s no downtime as players place tiles together.

The learning curve for this one is rather short. Within a few minutes, pretty much anyone can pick up at least the basics of how the game works. With games lasting for about 15-20 minutes, it’s also easy to complete a quick game for a short session, or jump right back in after the previous game has ended.

NMBR 9 is a solid tile-placement game with some interesting wrinkles to it. Trying to find the balance between scoring now or building a better base or committing is a interesting challenge you’re constantly faced with over the course of play. Its short turnaround time and ease of play also make it a great one to experience with casual or new players. How high can you stack the 9?