Most of the time, downtown Toronto is a bustling metropolis. But right now is not most of the time. During a past Saturday afternoon post-pandemic, Steff and I had to make a trip into the city to get a few things she needed from her work. What we saw was certainly…different.

On our way downtown, we made a quick detour to my old pharmacy to refill my asthma prescriptions. Though the atmosphere among the customers was tense, I appreciated how the store marked off areas on the floor to denote the appropriate social distance. Wish more stores would do this! 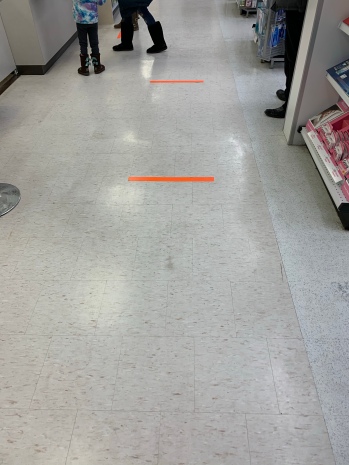 This particular pharmacy had a walk-in clinic attached to the back of the store. It’s usually packed, but the waiting room was virtually deserted. Only the person working the front desk was there, donning a mask. How many people are legitimately in need of medical attention that are staying home in fear of catching VOLDEMORT-27 at the doctor’s office?

Then it was time to enter the city. Parking at a central garage, it was stunning to see how empty it was. Below is a picture of a vacated first floor. I normally have to go multiple floors down before finding an open space. 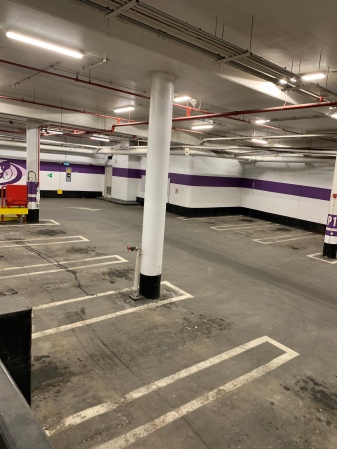 As we left the garage and toward’s Steff’s work, it wasn’t quite short of a ghost town. there were people walking the streets and a handful of cars still on the roads. However, the volume of traffic was what I’m used to seeing at 2am on a weeknight rather than early afternoon on the weekend. Seems like much of Toronto got the memo to stay home.

After getting Steff’s stuff, we passed by Yonge + Dundas Square. Essentially our version of Times Square, there are usually hundreds of people in-and-around the vicinity. At this moment, there’s one person in the picture. Based on my memory, there were…less than 10 total.

Leaving the city, the view down Yonge towards Lake Ontario was…oddly clear. I’ve been stuck for ages in bumper-to-bumper traffic on this street. In this moment, there’s literally no one in front of me. Wild.

Though we’ve worked in the city for many years, it felt odd to have been away from it for a few weeks and return to it in this state. With the way things are going, we probably won’t be back anytime soon. Or anywhere beyond our house for that matter.

It can’t be stated enough. Please maintain your social distance and wash your hands frequently. Don’t go outside unless you absolutely have to. Fingers crossed that the next time we’re back in the city, it’s because we’re back to business as usual.

3 thoughts on “Runnin’ Through the 6ix”