Many years ago, I made a pledge towards Street Fighter: The Miniatures Board Game. Despite the frequent project updates from Jasco Games, so much time had passed that the idea of ever gettingit slipped my mind.

It’s no longer a pipe dream. It’s finally here! At the pledge level I backed the project at, I received the base game, boss expansion, and all of the stretch goals. Let’s open all of these boxes together!

Let’s start with the base game. It comes with six characters, one double-sided board, and all of the accessories you’ll need to get started. One may debate which characters should have made it into the base set, but I’m okay with who they chose. Ryu and Chun-Li are locks. Ken might be very similar to Ryu, but he’s wildly popular and you can’t leave him out. Zangief is a popular character who also serves as the de-facto grappler archetype. Sagat and Vega are two original boss characters who specialize in ranged attacks, which gives the base roster a decent mix of play styles.

When you first open the box, you’ll get many cardboard sheets with bits for tokens and 3D objects. These bits of scenery not only add to the ambiance as you can knock enemies into this terrain for extra damage.

Some terrain is easier to set up than others. The trees and rocks are quick and easy, but the military base objects are a nightmare. The crates are designed to fall apart on impact, but that makes them extremely difficult to assemble without having the crumble. The overly-produced missile racks take way too long to assemble, considering their only real functional benefit is to denote a place where a fighter can take a single tick of damage if they hit the rack. Considering how long it takes to build the boxes and missile racks, I’d rather use less cumbersome objects to represent terrain on the military base.

You also get a double-sided board. Each side represents a different stage. On one side, you get the dojo. On the other, the military base.

Admittedly, I had concerns about the game being played in a 3D space. Of course, the series is rooted in fighting on a 2D plane. Now that I’ve actually played the game, it makes sense for the game to be played in 3D. That said, you can house rule the board and keep the action to one row if you want. If you bought the package with the stretch goals, you’ll get a special board with “2D” stages. Pictures of that later in this post!

Below the board, we finally get our first glimpse of the figures. These pre-painted miniatures are fantastic! In terms of scale, they’re loosely in the same ballpark as Amiibo figures. I adore how much detail has been sculpted into each figure and how well these figures are painted. They look absolutely stunning on the table in the heat of battle.

Here’s a close-up look at Ken. Of course, he’s in the midst of performing his signature attack: the Shoryuken. I appreciate that the design uses the fire trail as a means of elevating the character in a pose that otherwise wouldn’t work for a figurine. No awkward stands here!

Each character comes with their own deck of cards, which are used to trigger their moves and character-specific events. Original art was commissioned for all of the cards and the manual, giving the game a cohesive look.

Here’s a closer look at the dice and the tracker. You’ll get eight dice, which are used to resolve combat. The tracker is used to keep tabs on health and meter. I have two gripes with the trackers:

Ryu and Sagat engaging in a fireball war in front of the dojo.

Onto the boss expansion. Though it comes in the same-sized box as the base game, it doesn’t have nearly as much stuff in it. But what it does contain packs quite the punch!

This expansion introduces the concept of boss battles and nemesis fights. The former involves one super-powered version of Akuma or M. Bison facing off against three standard characters. The latter is an epic fight between these two boss characters that also features powered-up event cards that change the complexion of the fight in more dramatic ways.

Two new stages and terrain sets are also included. One side is the street and the other is the temple. Having more stage variety is a huge plus! Based on my experiences with the base game, I may lean towards playing the temple level more by virtue of it using trees and rocks instead of the tougher-to-build terrain associated with the street scene. Don’t get caught in the corners behind the statues though, as that will almost certainly spell doom for you! 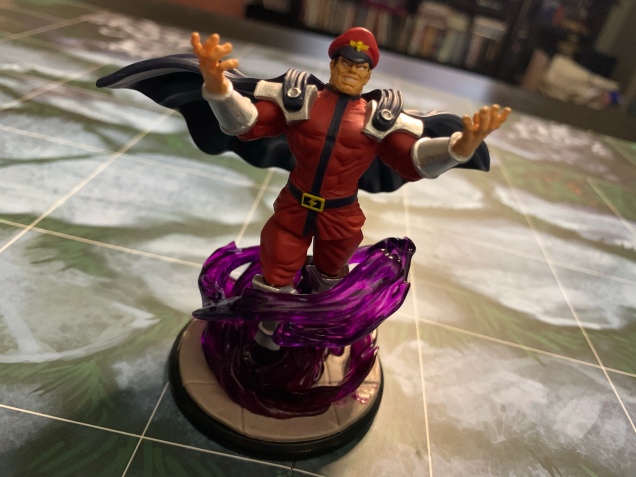 With his cape blowing in the wind, M. Bison strikes a dominant pose!

Akuma is winding up for a Shakeunetsu Hadoken! Having the energy swirling around Akuma as he powers up is a nice touch!

M. Bison watches as a mind-controlled Cammy holds her ground against an incoming Sonic Boom from Guile!

Unlike the base game, each character gets custom counters to account for their boss-specific health values. Unfortunately, these dials also have the same issue as the base game in that they have the wrong values on them.

Last but not least is the box containing all of the stretch goals, as noted by the text on the box. Clearly, presentation for this portion of the set wasn’t as high on the priority list as the base game and the box expansion. While the stark contrast in presentation is disappointing, the box does a great job holding all of the extra perks. Also, there’s a lot of good stuff in here!

As soon as you open the box, you’re greeted to a set of nine figures. Eight of them are new characters and the last one is the Capcom Cup. Not only can you fight for the trophy, the game comes with rules for running your own Capcom Cup tournament. Nice touch!

Going above and beyond, the stretch goals include rules, a board, and tiles for a car smashing mini game. Players will compete against each other to claim the most car parts by bashing in the car. Don’t think I’ll spend much time playing this, but it’s a cool nod to the franchise’s roots.

At the base of the box are four more figures, a Gouken tracker, and all of the cards for the stretch goal characters. Between the base set, boss expansion, and stretch goals, I’ve got 20 characters to choose from. Another 16 are available as add-on purchases, but the steep shipping costs may prevent me from ever completing the collection. Nevertheless, 20 characters as part of this Kickstarter set is a great start!

Though boss characters come with special decks that allow them to be played as bosses or as characters of regular strength, Cammy is the only character in this set to have two different figures. I personally prefer her Shadaloo figure in the stretch goals set.

For the purists, the stretch goal box includes a double-sided 2D stage! The combat will definitely change in a 2D plane, but I’m so glad that the option is available as part of this set.

Fei Long lunges at Cammy with a burning kick!

One last goodie to share! Though it has no gameplay benefits whatsoever, the stretch goal box includes the pieces to assemble a cardboard arcade machine. Will look great in my streaming backdrop!

Thank you to Jasco Games and Kickstarter for the opportunity to snag the set! Not only does this look like a premium board game, it’s a lot of fun to play too! Will probably write separate reviews for each portion of this bundle, but reviews are next on my list!