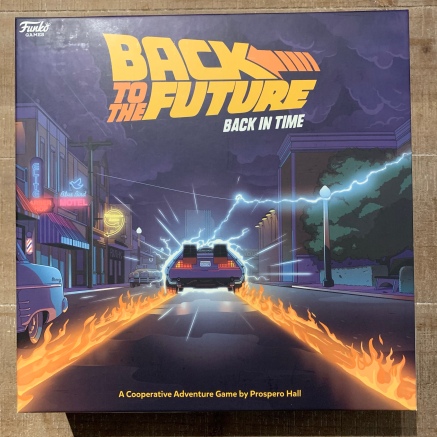 Back to the Future: Back in Time uses the plot of the first movie as the backdrop for this cooperative board game. Playing as Marty, Doc, Jennifer, and Einstein (the dog, not the person), you must work together to fix the DeLorean, ensure that Marty’s parents fall in love, and time travel out of the 50s before forever altering history. Can you get this done before November 12th, 1955 at 10:04pm?

Yes, that’s a lot to accomplish in a short amount of time. There are also no shortage of events happening around the city to slow you down, from gang activity to the Starlighters’ guitarist getting injured and in need of someone to take his place. 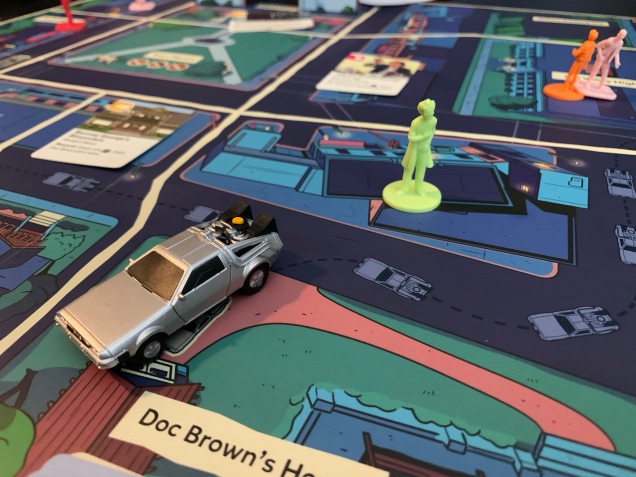 Oh, and then there’s Biff. Just like the movies, Biff is the worst. He’s constantly getting in the way of your every move while actively trying to get in the way of Marty’s parents from ever getting together. While you can get the satisfaction of knocking him out as an in-action, the jerk is relentless!

With so much to do and not a lot of time to do it, you and your team will have to work together to get everything done. Each of the four characters has an action board that starts with seven action tiles. You will spend these actions by moving around the board and rolling dice in hopes of completing challenges that will help you move closer to your goals.

While every character gets access to the same four types of actions, the distribution of actions varies. For example, Doc gets access to more green actions than anyone else, making him better equipped to move the DeLorean. Players can even lend any number their actions to another if you really need to get something done immediately at the cost of the lender not being able to use those same actions on their turn. One way or another, everyone is going to have to do everything at some point, but having characters focus on their specialties is a key strategy to leverage. 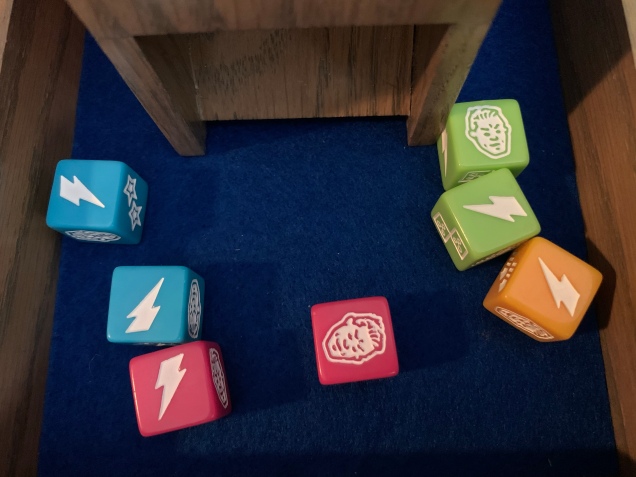 You can keep rolling dice to get the exact values you want unless you roll a Biff. Once that happens, that die is locked and Biff moves towards Lorraine or George. If Biff is already in the same location as either, your photo meter loses points. And if that photo meter runs too low for too long, history is forever changed and the McFly kids will have never existed. Damn it, Biff!

Though the game is very mechanical in nature, it puts in a tremendous effort to capture the essence of the movie. Many of the game’s Trouble and Opportunity cards make reference to specific parts of the movie. You have three total objectives, but you can’t just do them at any time. You have to have all the parts for the car ready by the time you get to Doc’s garage or the car can’t move any further. Also, just like the movie, it’s cool to see how the game incorporates the fading picture as a gauge of your success with ensuring that Lorraine and George fall in love. Overall, it does a great job at capturing the essence of the movie. 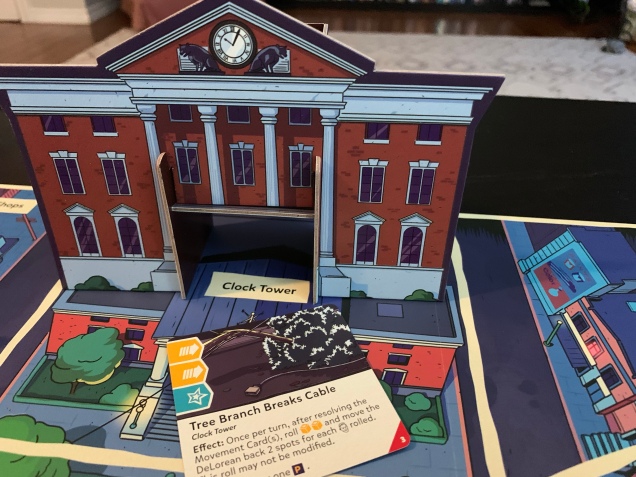 Adding to the game’s movie-like feel is its overall presentation. From its vibrant game board, to its clocktower that doubles as a dice tower, to the DeLorean figure that you’ll drive across the board, it’s a great game to look at. I know pricing will vary, but strictly from a component quality perspective, it delivers handsomely relative to its MSRP.

As for the game itself, it’s enjoyable and stressful in a way that you’d hope for in a good co-operative game. As time ticks down, the game puts more and more pressure on you to get things done. In particular, Biff is a constant thorn in your side. But between players leveraging their character’s strengths, sharing actions where needed (and hopefully not rolling too many Biff faces), it’s possible to make everything right before it’s too late!

Back to the Future: Back in Time cleverly wraps the plot of the first movie into a thematic and tense co-operative game. You and your team will have a great time playing matchmaker to Lorraine & George, driving the DeLorean, and punching Biff in the face. Make sure you punch him a lot! 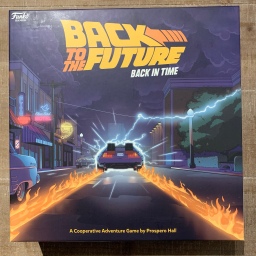 Buy Back to the Future: Back in Time Now From Amazon.com