Booster boxes are designed for retailers to have a display of card packs that they can then sell individually. They were not originally intended for individual consumers to buy a whole box for themselves, nor were they originally intended for content creators to buy dozens of boxes to then plow through them on stream with others waiting for that ultra rare card reveal.

With all of the hoopla surrounding Pokemon card collecting, it’s easy to lose sight of what booster boxes are intended for. And for serious collectors, they really don’t care what their original purpose was if it means they can get a lot of cards at a discounted rate.

During my initial wave of fandom, I decided to order a booster box for myself. Today, Steff and I open the final pack. Unless we open a god pack, I think I’ve seen enough to document the experience of owning one of these monstrosities.

There are a few reasons why I took such drastic measures so early on in my journey: 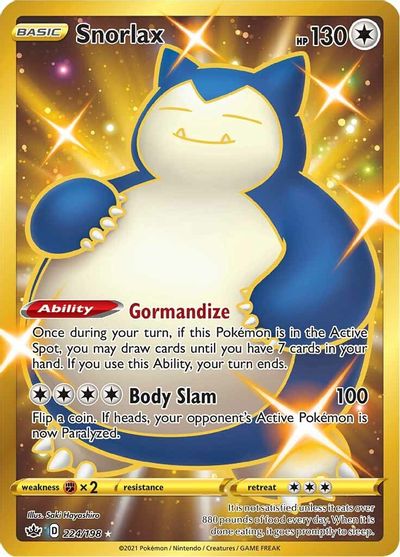 If I wasn’t able to pull a shiny Snorlax, that would be okay! Or so I thought it would be going into this. I still get the experience of opening many packs and expanding my collection across different energy types and Pokemon.

Now that I’m in a position to look back at the process, let’s go through my points to see how things actually shook out.

In order to enjoy the experience for as long as possible, Steff and I mandated that we’d only open one pack a day. Looking back at that choice, I agree with it. Getting that little hit of enjoyment each day did help us enjoy the experience longer while appreciating the cards we did get more. I feel like had we plowed through the set, we would have overlooked all the cool regular stuff that has applications in the game and just fixated on which ultra rare cards we did or didn’t get. Also, the desire to buy another one immediately after would likely have been elevated as well.

One thing I realized by going through this process is that you’re bound to get duplicates. Lots of them. Even though there are 360 cards in a booster box, you’re not going to get every single card in a set by virtue of how rare cards are weighted vs. regular ones. I have just over half of the set covered, but I’m still quite short of everything and am drowning in the most frequently-pulled common cards. If we exclude the rarer full-art cards, alternate art cards, secret rares, rainbow rares, and secret Pokemon, I have about 70% of a “functionally-complete” set.

Duplicates to a certain extent aren’t actually bad in the Pokemon Trading Card Game. You’re allowed to have up to four cards with the same name on them, which gives you more chances of pulling that card in a match. You may want to have those same four cards in multiple decks, meaning you’ll actually want more than four so you don’t have to deconstruct a deck to build a new one. Even so, across 36 packs, you will end up with more duplicates than you’ll need of multiple Pokemon.

One of my key goals for buying a booster box is to build a solid foundation of Pokemon across all energy types. However, going through this process has taught me that one expansion isn’t going to do that for me.

The fundamental problem is that expansion have roughly 100-200 cards, which includes trainer cards and Pokemon cards. Each set only has a handful of Pokemon across each energy type and they’re not weighted evenly.

The Chilling Reign set is rife with water cards (18) and psychic cards (22). But other sets aren’t as stuffed. Fire and electric get the shortest end of the stick, with only nine and seven cards apiece. Add to that the mechanics around evolutions, and there are like, 3-4 evolution lines each in fire and electric.

In order to achieve the gameplay variety I’m looking for, I’m going to need to widen my search across different sets.

Did I get the shiny Snorlax?

Unless it magically appears in the final pack sitting on our coffee table that we’ll open later today, no. And that’s okay!

By virtue of me getting more deeply involved in the game itself, my satisfaction with the cards doesn’t entirely hinge on me pulling full-art rare holo cards. It’s been a positive experience to review all of the cards I’ve gotten, think about the possibilities of using them in a deck, and then actually using the cards in action.

Maybe we didn’t get shiny Snorlax, but we did pull a few gems of our own too! I’ll share a few here.

This VMax Tornadus V is a gem!

Love how the holo makes the light beams coming off of Zapdos V really pop!

Truthfully, I enjoyed the experience of having a booster box a lot. Having that one moment a day where Steff and I huddled around the couch and opened a pack was a highlight of each day. Then to have those cards in our set and use them in the game made it even better.

Is it something I would do again?

…maybe? Knowing the limitations of a booster box, it’s not necessarily the best investment for me. I would value taking fewer cards from a wider range of sets to get more Pokemon across different energy types, versus a concentration of a few Pokemon within a set. Something like an Elite Trainer Box may ultimately be a better fit for my needs.

That said, I can be swayed if I feel strongly enough to chase a specific card or there are a lot of Pokemon of a specific type that I’m short on. I’m still short on fire and electric types even after opening these packs. Maybe a future set would help me fill that gap?

This may not be the last time I buy a booster box, but I highly doubt that I’ll invest in another one of these in the near future. Based on my needs, I’m better off using that money across a wider variety of sets rather than going all-in on one.

For those still in the booster box grind, I wish you all the best! Hoping that next pack includes the card of your dreams!