While golfing the old fashioned way is still an option, the entire game has been designed with speed golf in mind. Every course is designed in such a way that allows characters to run to the ball after each shot. Characters have stats relating to their speed and stamina. They also have access to a speed boost that can be recharged by picking up hearts on the map. Even drafting is possible here, as trailing immediately behind another golfer for a period of time triggers a speed boost.

On paper, this sounds great. For some, this might be the kick in the pants they need to try and enjoy video game golf. However, the side effects of this decision are numerous and ultimately detrimental to the overall experience.

Shifting the focus from precision shooting to speed takes away from what I actually play golf games for. I play golf in order to perform skill shots that usually take a bit of time to calculate and perform. There are options to prioritize scoring over speed in speed golf, but the time crunch persists, forcing players to take less accurate shots for the sake of completing in a faster time. It almost becomes a button-masher in that way when speed is everything.

What you get in exchange are on-foot portions that aren’t nearly as enjoyable as performing a skill shot. You simply run to your ball across courses that are mostly just flat surfaces devoid of any real obstacles, timing your boosts in a way that hopefully get you to your ball in the most efficient way. Sometimes you can bump your opponents, but these on-foot segments rarely change the outcome and aren’t fun to play.

The most ironic part of speed golf is that speed golf isn’t actually the fastest way to play. Nintendo implemented a massive quality-of-life improvement that allows multiple players to shoot at the same time. Instead of wasting time running between shots, the game just warps everyone in place, keeping the focus on skill shots while making the most dramatic difference to the overall pace of play. When playing against the computer or playing with friends online, having everyone shoot at once is a real game-changer that makes it more exciting for everyone involved.

Furthermore, the actual mechanics for shooting the ball are better than they’ve ever been. Moving away from the traditional two-click system from many golf games, you only need to set one click for power during the wind up, while using the time during the forward swing to add spin. Other quality-of-life changes give players more control on top of being easier to use, from the bending gauge to show how a shot will curl if you’re shooting on uneven terrain, to a split power bar that allows you to put different directions of spin on the ball. It’s easy to overlook these amazing changes to how the game plays when you spend most of your time in speed golf running from shot-to-shot.

The inclusion of speed golf would have been fine by me as a side mode in the same way that battle golf is included here. Battle golf is essentially speed golf in two specially-designed courses that you can engage with or ignore at your leisure. Unfortunately, every aspect of Mario Golf: Super Rush is compromised by speed golf.

Every course in the game is designed with speed golf in mind. As such, all of the courses are built to accommodate for characters moving between shots, which leads to the most uninspired set of courses the franchise has ever seen. Even the harder courses at the end feel bland, save for tacked-on fantastical hazards like tornados and Thwomps that take away from the brilliant balance of realism and sensationalism that Mario Golf on the Nintendo 64 achieved decades ago.

You don’t get a reprieve from speed golf in the story mode, either. While it attempts to spice things up by leveraging some of the RPG elements that make Mario Golf on the Game Boy a hidden gem, speed golf persists in levels you must complete in order to progress through the campaign.

Disappointed as I am in the game’s foundation, there are aspects of the overall experience that redeem it somewhat. Again, its improved shot mechanics and the ability for multiple players to shoot at once make for a much smoother game to play. This is particularly useful online, as matches against your friends or random golfers around the world can move at a brisk pace. If you want a Mario Golf game on the Nintendo Switch that you can enjoy with friends locally and online, this technically fits the bill and could very well be worthy of a purchase.

But relative to the high standards set by its predecessors, Mario Golf: Super Rush falls short by virtue of betting big on a play style that ultimately doesn’t pay off. Subpar course designs in service of a worse way to play golf doesn’t outright ruin the game, but it certainly makes it a somewhat disappointing one. 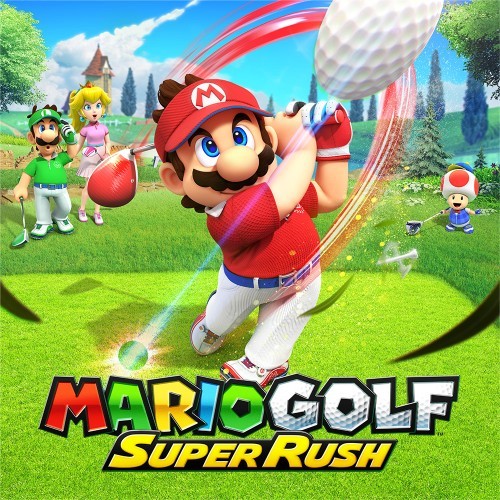