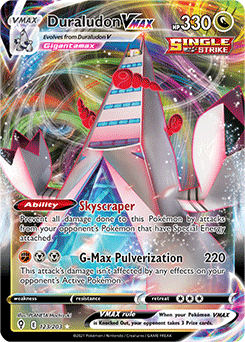 Duraludon VMAX made its debut as part of Evolving Skies. While it hasn’t disappointed to the extreme like Rayquaza VMAX has, Duraludon VMAX doesn’t get much play or discussion.

Nevertheless, Duraludon has taken Zamazenta’s spot as the shield in my Zacian V metal decks. Here’s why.

The Skyscraper ability shuts down many meta-relevant decks

When Duraludon VMAX is in play, it nullifies any damage taken from your opponent’s Pokemon that have Special Energy. This greatly hampers Rapid Strike decks, Single Strike decks, Dragapult decks with Horror Energy, any deck running Capture Energy, and much more. Zamazenta’s ability to block VMAX Pokemon is great, but Duraludon’s ability gives it the potential to shut down Pokemon of all sorts.

While the ability is incredibly powerful, it’s also one that can get shut down by Path to the Peak. This Stadium card disables all abilities on rule box Pokemon, which makes it a very popular inclusion in many decks. Furthermore, there are a few attacks that can still punch through without the assistance of Path to the Peak, such as G-Max One Blow from Single Strike Urshifu.

The popularity of Path to the Peak may not make Duraludon a deal-breaker to me, but it does weaken its overall value proposition. Zamazenta is just as vulnerable to it. Even so, Duraludon has other strengths and can fare well against other decks that avoid using Path to the Peak, such as anything with Zacian V, Eternatus, and Shadow Rider Calyrex among others.

G-Max Pulverization is a devastating attack

My fundamental problem with Zamazenta is that its Assault Tackle move only does 130 damage. The ability to discard a Special Energy is an added bonus to that move, but it’s not helpful in every matchup. It’s going to take Zamazenta at least two attacks to drop a Pokemon V and three to down a VMAX.

For one fighting and two colourless energy, Duraludon VMAX can hit for 220 every turn. That’s enough to one-hit KO almost every Pokemon V in the game while also badly damaging most VMAX Pokemon.

Better still, G-Max Pulverization ignores the effects of the defending Pokemon. Because of this, you can punch through shielding abilities like Decidueye’s Forest Camo and Zamazenta’s Dauntless Shield. Duraludon’s primary purpose is to act as a shield for Zacian, but it can hit almost as hard without the consecutive turn restrictions that hamper the sword-wielding wolf.

In the Sword & Shield era of the Pokemon Trading Card Game, Dragon type Pokemon don’t have any strengths or weaknesses. Because of this, battles against fire decks won’t be an auto-loss for your metal deck. Not being able to hit for weakness stinks, but hitting for 220 every time and being able to punch through effects is worthwhile compensation.

As much as I’ve hyped up Duraludon VMAX’s strengths, I can’t ignore its weaknesses. These drawbacks what keep it from being adopted by the wider player-base. Just like Zamazenta V, Duraludon’s game plan is severely hampered by Path to the Peak.

Unlike Zamazenta V, it will need two different types of energy to work in a metal-themed deck. You can’t just use Metal Saucers to quickly attach metal energy to Duraludon from the discard pile. Having the Bronzong with the Metal Transfer ability

Aurora Energy works fairly well as a substitute, but there will be times when that Aurora Energy just won’t show up. Furthermore, even when it’s attached, it’s harder to replace and more damaging to your approach if it gets knocked off by a Crushing Hammer or Fan of Waves.

On top of all that, Duraludon VMAX needs to evolve. That’s assuming you have the evolution card or an evolution incense handy. For all the strengths that Duraludon has, it’s hard to argue the convenience factor of Zamazenta. In a late-game scenario, you can place Zamazenta on the board, use Metal Saucers to charge it up, and then switch it into the active spot to block VMAX attacks and hit for 130.

The pros won’t outweigh the cons for most. But Duraludon’s strengths just make it more enjoyable to play with, even if my winning percentage may not be as high as it could be. When tournament time comes, we’ll see how loyal I’ll be to this towering Pokemon. For now though, Duraludon is my go-to bodyguard.