Rapid Strike Urshifu VMAX is the star of this deck. For just one fighting energy, it can hit for an efficient 150 damage if it moves into the active space. The Tower of Waters Stadium makes moving Urshifu around the board a breeze.

More importantly, Rapid Strike Urshifu has access to the maneuver G Max Rapid Flow. For two fighting energy and one colourless energy, Urshifu can discard all of its energy and hit any two Pokemon for 120 damage each. 120 may not be enough to one-hit KO a V or VMAX, but that’s enough to score two quick knockouts on smaller support Pokemon. With a well-placed Rapid Flow, you can destroy your opponent’s setup, rendering them helpless in the process. If one isn’t enough, two-or-three Rapid Flows will likely end any match!

Rapid Strike Urshifu V is pretty good too! For one fighting energy, it can do 30 damage and move onto the bench, keeping it safe until you’re ready to strike again. Also, for two fighting energy and one colourless energy, it does 150 damage. Not bad if you’re in a jam and can’t find the VMAX. 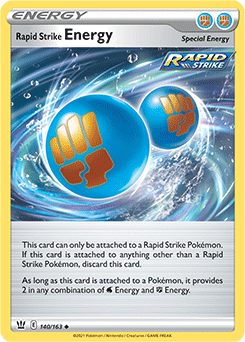 Be careful how you use it though! If you use G Max Rapid Flow or if a Pokemon holding Rapid Strike energy is knocked out, that energy goes into the discard pile and can’t be recovered. You’re going to have to burn this energy to win, but make sure you have enough Rapid Strike energy to finish the fight.

Other support Pokemon that come with the deck include Cinccino and Falinks. Cinccino is a fantastic draw supporter, allowing you to draw two cards by discarding one. Though it can help you get the cards you need faster, Cincinno isn’t the engine most players pair with Rapid Strike Urshifu. It’s okay for now in this deck, but you’ll definitely want the Cinccino cards for other decks that will benefit more from its presence.

Falinks is the black sheep here. You’ll want to avoid using it completely, but it can hit for decent damage if you have a full bench of Rapid Strike Pokemon. When you upgrade this deck, Falinks should be the first to go.

Good Trainer cards are crucial to one’s success in the Pokemon Trading Card Game. Not only does this deck come with numerous staple Trainer cards such as Marnie, Boss’s Orders, and Professor’s Research, but you’re also getting a suite of Rapid Strike Trainer cards and energy cards that essential in this and any other Rapid Strike deck you may create down the road.

This deck has almost all of the Trainer cards you’d need to make it work effectively. Better yet, this set of Trainer cards can be used in any future decks you make, especially in Rapid Strike decks!

Rapid Strike Urshifu VMAX is a force to be reckoned with. Since making its debut, its been the focal point or a supporting member of many tournament-winning decks. Save for a few match-ups against certain psychic decks such as Mew VMAX, Rapid Strike Urshifu can go toe-to-toe against pretty much any deck out there.

There are many configurations for building a top-tier deck featuring this kung fu bear. However, the League Battle Deck iteration is short on cards to truly realize its potential. The cards you’ll seek will depend on your play style.

My personal favourite way to play is with the Melony variant. Popularized by top player and former world champion Tord Reklev, the combination of the Inteleon support line and Melony Supporter cards make it easy for Rapid Strike Urshifu to perform G Max Rapid Flow on consecutive turns. Stringing together two-or-three is enough to crush almost any deck!

If you want a variation that can better withstand the Mew VMAX matchup, there’s a version that features Galarian Moltres V that I like to use. I’ll add both deck lists to the bottom of this post, but search for Rapid Strike Urshifu VMAX deck ideas on places like YouTube, Justin Basil, and tournament results from Limitless.

And if you’ve got time to spare, I made a whole video that covers the League Battle Deck and both of the upgrade concepts mentioned above. You can see all three in action here!

The Rapid Strike Urshifu League Battle Deck is fun and decently-strong deck to play out-of-the-box. But when you’re ready to upgrade it to top-tier status, here are some cards to add! Keep in mind that decks must feature exactly 60 cards, so you’ll need to remove some to make these fit!