With the Nintendo 3DS set to hit North America in a matter of days, it’s time to close the books on the Nintendo system that could. Who knew that the ugly and under-powered Nintendo DS would end up becoming one of the best-selling systems of all-time? Who knew the device would actually usher in a new era of casual gaming?

Though I’ll confess to not having played my DS in a very long time, I bought a ton of games for it during its hey day and had a lot of great memories with it. Before moving into the next era of handheld gaming, I thought I’d close things out by listing off my top 5 favourite Nintendo DS games.

Hot off the heels of Phoenix Wright: Ace Attorney, I was in the mood for another DS adventure game. While this plays quite differently, I loved this game almost as much. Though the game featured heavily-stylized characters, their dialogue and the plot they’re placed in made them feel like some of the realest characters I’ve ever interacted with. I’ve wanted to write a blog post about my love for this game, but I don’t feel like any of my attempts at it have ever done the game justice. Not to say that it’s a perfect game, but it’s a game that really hit home at the time. This one is worth tracking down if you’re into adventure games and missed out on it the first time.

I love Tetris Attack. Though that game and the Puzzle League series has never caught on, I think that it’s got the best multiplayer of any puzzle game out there. Planet Puzzle League was the same core game I loved, except with touch screen controls that worked really well and online multiplayer. The only bummer with this game is that the online community dried up really quick, which was a shame.

Long before the first Bleach DS game hit North America, I had already imported the first two games in the series from Japan. Bleach: Dark Souls (or Bleach DS 2nd, if you have the import) is hands-down the best fighting game on the platform. The core fighting mechanics are awesome, as they feel a lot like BlazBlue. It had great single player modes, great local multiplayer modes for up to 4 players on one cartridge, and had great online multiplayer. It’s a shame that every Bleach DS game after this wasn’t a fighting game, because the formula they came up with here was awesome.

The rise to success for Phoenix Wright is actually quite the remarkable story. The original trilogy was completed on the Gameboy Advance in Japan long before it ever saw the light of day on the DS. However, it didn’t gain it’s cult following and mass success until it hit the DS. Back when scoring an early print of the North American copies of Phoenix Wright was a big deal (and sold out everywhere), I actually ordered the Japanese version, which contained an English option.

Though I’d never really gotten into adventure games before, this one really won me over. It’s funny dialogue, quirky charm and engaging gameplay kept me hooked right up until the ultra-dramatic ending. You can buy this now on iTunes for $5, but for the time, the DS version of Phoenix Wright was the way to go. 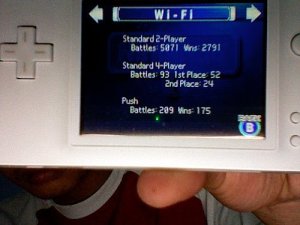 See that above picture? That is me, displaying my Tetris DS record. Yes, I have played over 5,000 online multiplayer matches of Tetris DS. There was a good two years of my life where I committed to becoming the best Tetris DS player in the world. In the grand scheme of things, I got pretty close. I once ranked within the top 300 in the world. I once faced off against Japanese pop star (and awesome Tetris player) Utada Hikaru in a 20-game set and won 13. I even beat the #1 ranked Tetris DS player in the world in a match. Outside of Street Fighter IV, no game has completely consumed me like that before.

Though there are newer versions of Tetris on the DS, Tetris DS is a fantastic version of Tetris. It’s got a ton of great single player and multiplayer modes for you to dig into. For me, it’s #1 because it’s online multiplayer was fantastic and insanely addictive.

Those are my five favourites. What are yours? I’d love to hear from you in the comments!