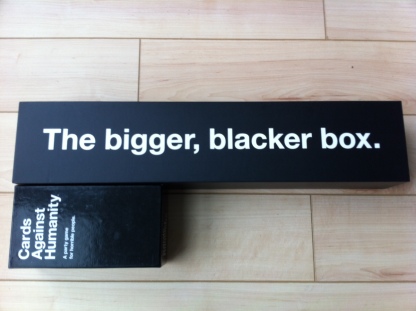 Coming in at 21 inches and 17 ounces, The Bigger, Blacker Box lives up to its name. For owners of Cards Against Humanity and its expansions, this is a new way to house and sort all of your cards. But can you justify spending $15 or more on a mostly empty box?

The box itself is made of a high-quality stock that feels sturdier than the one that houses the original set. In particular, this is a huge upgrade from the paper-thin boxes that are used for the expansions. It’s long, rectangular shape may prove to be cumbersome when you’re trying to store it away on a shelf or in a bag, but it’s a trade-off you’ll need to consider if you want one container to store up to 1,500 cards. As someone who owns the main game, three main expansions and the Christmas expansion, there’s enough space in there to hold all of them with plenty of room for future cards.

Inside, it’s not actually empty. You’ll get five foam fillers, each of which is about the size of a standard Cards Against Humanity expansion. There’s also a number of plastic dividers to facilitate sorting in any way you like. If you’re into writing your own cards, this comes with 40 blank white cards and 10 blank black ones you can use. For completionists, you’ll get the 20-card Box Expansion that is exclusive to this, but they’re all throwaway cards that aren’t funny or useful. Not pictured above is a cardboard tray that is just big enough to hold all of the cards from the original set. I wanted to mix all of the main cards and the expansions together to form one mega-set. 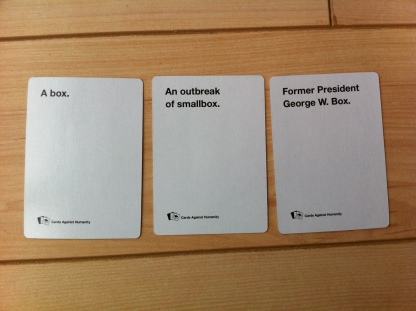 If you’re in the market for a large box with the Cards Against Humanity branding on it and have money to burn, then The Bigger, Blacker Box may be worth the investment. I like having the ability to store them all in one place for years to come in an officially branded box. However, if you just want a big box and don’t care what it looks like, you can get generic trading card boxes that hold just as much for a dramatically lower price. Diehard fans wanting to complete their collection won’t be disappointed, but for everyone else with a storage problem, you’re probably better off with something cheaper.

One thought on “Cards Against Humanity The Bigger, Blacker Box Review”

Going Super Saiyan!
Too caught up in chat to realize I scored a perfect!
40 booster packs later, here are Steff and I’s big pulls from the Chilling Reign set of Pokemon cards! Which one is your fave?
Hoping that more women’s clothes get blessed with pockets like these
🚨STREAM HYPE!🚨
Sunday vibes