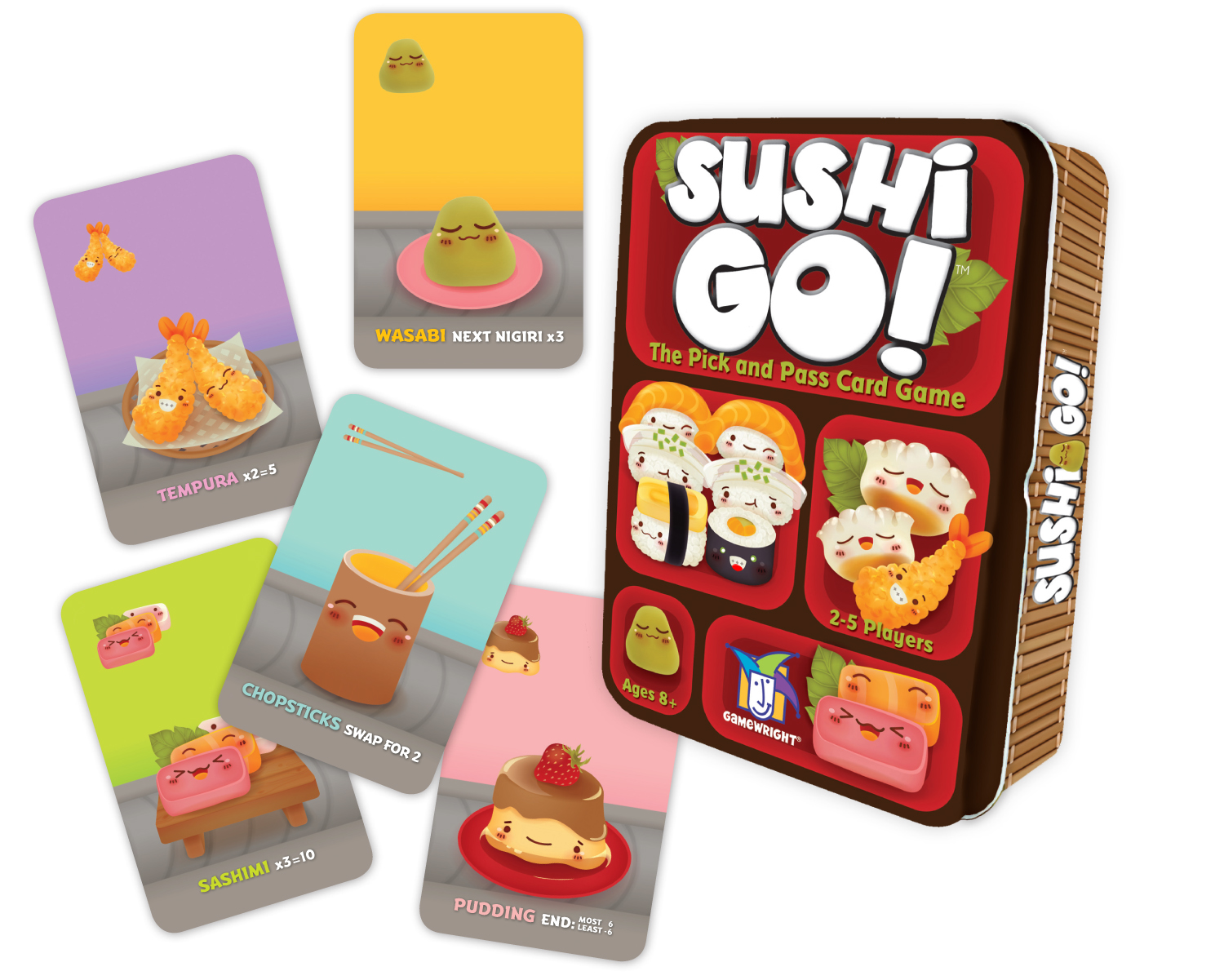 The game is played entirely with the 108 cards that come in the box, though you should have a pen and paper handy for scoring. Displayed on the cards are different types of sushi, such as maki, tempura and sashimi, just to name a few. Each card will help you gain points, but they’re unique from each other in the way that they count towards your score.

For example, one tempura card by itself is worth zero points, but two tempura cards as a set are worth five. Sets of dumplings raise exponentially based on the number of dumplings on-hand. The most interesting mechanic involves the nigiri and wasabi. Nigiri cards have a base value when played individually, though their values triple when you dip it in wasabi.

Knowing what types of sushi to focus on will be the key to winning, though forming a foolproof strategy is almost impossible. At the start of each round, players will place a card from their hand face-down before revealing them all at the same time. After that, players cycle their hand to the person beside them and the drafting process begins again until all the cards have been used up.

Because of this pick-and-pass mechanic, you don’t know all of the cards out there, and probably won’t be able to track the inventory of each hand as they work their way around the table. Instead, you’re going to have to make some tactical choices around which cards to keep and hope that you’ll get lucky as these hands come back to you. This mix of tactics and luck make for a game that stays fun after multiple plays, as you’ll never really know what’s coming next.

With four or five players, the game reaches its true potential as an engaging and lightweight family game. The box says that it also works for two or three players, though the game starts to break down. In particular, the game really falls apart with only two people involved. At this point, the hands cycle between the pair too quickly, which makes set-collecting much easier to forecast. Recognizing this, the rules feature a two-player variant that includes a third dummy player, though the player directly before the dummy in turn order can manipulate their cards so that the dummy’s cards are revealed in a certain way. The real solution here is to not play this game in pairs.

Assuming you’ve got 3-5 players handy, Sushi Go! is a very good family game that can be played in 15-minute sets. It’s simple to learn, fun to play and one that has some staying power thanks to the possibilities that come with trying to build the perfect plate of sushi. I doubt that I’ll ever come around to eating sushi in real life, though this game will certainly be one I’ll enjoy for the foreseeable future.