Things aren’t looking good for you and your fellow colony members. Supplies are running low. The bitterly cold weather puts everyone at risk of catching frostbite. Tensions are running high, as you’re never sure of who your real allies are. Oh yeah, and there are zombies everywhere. Welcome to Dead of Winter: A Crossroads Game.

Created by Issac Vega and Jon Gilmour, this is a cooperative board game in which players must work together in order to complete a common goal before morale or the round counter hits zero. The game comes with 10 objective cards, each with two different difficulty settings. These objective cards feature unique setups and stories. In one game, you might have to collect enough zombie samples for a chance at creating a cure. In another, your colony may be forced to endure a difficult stretch where the compound is filled with helpless survivors that are mooching off of your food stash.

Each player will be working towards the goal by managing their own group of survivors within the colony. At the start, players will have two characters in their clique, though you may get the opportunity to grow your party with new people. The opposite is also true – and more common – as members of your group will likely die horrible deaths. The game comes with 30 different characters that each have their own strengths, weaknesses and story beats. I’m certain that new characters will be added to the game through expansions, though the cast that’s already here is generous in size and variety. 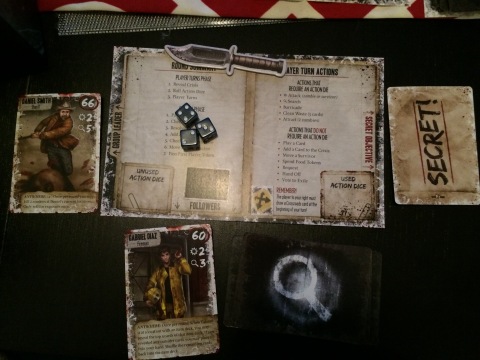 When the game begins, each player will take turns controlling their characters. They have a variety of actions available to them that can be done in any order, such as moving between locations, fighting zombies, and searching for gear among many others. Some special actions, such as fighting zombies, require players to spend a pre-rolled action die of a certain value in order to execute them. Because of this, you may not always have access to the things you want to do at any given time.

At first, coming to grips with the framework of the game can be a bit overwhelming. Besides having to work towards completing multiple objectives, players must contribute to a daily food quota that will lower morale each time some survivors are forced to starve. There’s also a Crisis that the group must contend with each round, which can only be resolved if players contribute enough of a certain resource before the round is over or face the terrible consequences that come with failure. This can become especially dramatic, as the Crisis contributions can be sabotaged with junk from a turncoat. 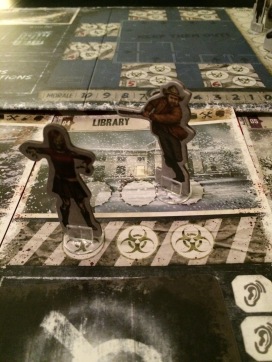 The game itself isn’t inherently difficult to play. It’s just a matter of grasping how its many components all work together to form this experience. Heavily recommend that you use the starting scenario for your first time and take the first playthrough slow in order to get a feel for it. After one full game, you and your group should have it all down.

What I love about Dead of Winter is that it serves as a great framework for a Walking Dead-inspired board gaming/role playing experience. A lot of the drama that the game generates feels like something from that franchise while adding its own touch to the storytelling. Most notable is the game’s Crossroad system, which I’ve criminally buried this far into the review. At the start of each player’s turn, a Crossroad card is flipped by another player, which features a major story beat that may or may not be triggered during that person’s turn. If it is, the other player reads it, and the active player usually has to make a tough decision. This system is a great way of injecting story into the game and one that is designed in a way to stay fresh for a long time. 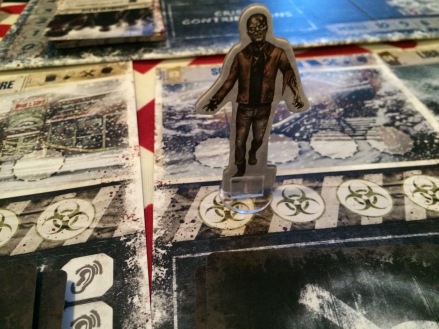 With three-to-five players, the game really shines. As a two-player experience, it doesn’t quite hit the same level of suspense, as the traitor mechanic is removed from play. The game is certainly playable and still fun, but I think it’s best to save this game for a larger player count. I can also see this game falling flat with certain groups. From a mechanics perspective, the game is solid, though its best played with people that are willing to role play a bit, especially when it comes to reading and responding to the Crossroad cards. You certainly don’t need to get overly dramatic with it, but just a nudge of placing yourself in the moment goes a long way towards making this game sing.

There are no shortage of licensed Walking Dead board games on the marketplace. However, if you want a game that really captures the essence of that fiction, Dead of Winter is without question the game to play. Even if you’re not a fan of Robert Kirkman’s franchise or zombies in general, this is a great cooperative game that’s mechanically sound while acting as an excellent springboard for role-playing the zombie apocalypse with your friends.