Before hitting my teen years, I learned the hard way as a video game player to be wary of licensed products. While the allure of playing video games about Batman, The Simpsons or Home Alone (shudder) is clear, the final products were mostly terrible. Quality of the final product usually wasn’t a priority, as publishers and license holders primarily created licensed video games as a promotional tool and as a means of making a quick buck off of unsuspecting gamers. I wasn’t really following board games at the time, though I did own a Teenage Mutant Ninja Turtles board game that wasn’t great in hindsight.

Of late, video games and board games have diverged greatly when it comes to licensed products. With the rising costs of video game development and a savvier audience who are far less likely to put up with mediocre products with name recognition, most licensed games nowadays reside on mobile platforms as free-to-play experiences. Board games, on the other hand, are going in the other direction. Instead of cranking out garbage games for kids, more license holders and publishers are taking the time to make quality games that gamers of all ages will want to buy. Off the strength of this business strategy, everyone wins.

By the time I started playing tabletop games in earnest, this trend had already begun. In fact, one of these licensed games was one of the first to reel me in. DC Comics Deck-Building Game by Cryptozoic was one of the first games I ever bought. This streamlined take on deck-builders like Dominion and Ascension doesn’t get much play in our house now, though it was in heavy rotation back in the day. As an introduction to that style of game, the DC Deck-Builder serves its purpose admirably. It’s been so popular that Cryptozoic has supported the title with a myriad of expansions.

Beyond that, you don’t have to look very far for good licensed games. Upper Deck has built a huge catalogue of licensed deck-building games under the Legendary moniker. This suite includes Marvel Comics, Aliens and Predator, all of which are critically acclaimed and quite popular. Haven’t played the latter two, though Marvel Legendary continues to be one of my favourites. What makes it stand out is that it takes the standard deck-building format and heavily revises it to create an epic battle between good and evil, as enemies terrorize a city while the mastermind works closer to completing their devious scheme. At this point, you can pretty much play out the Marvel scenario of your dreams in the game with all of the different cards that can be added to the base set.

One board game publisher has made licensed board games their bread and butter. From Firefly: The Game to the recently-released WWE Superstar Showdown, Gale Force 9 have released a string of quality licensed games that receive critical reviews and appear to sell well enough to sustain this current business model. If I haven’t bought the wrestling game by now, I probably will in the very near future. It’s great to see that at least one company can make this a primary focus and still succeed in the marketplace.

On the other end of the spectrum, license holders are allowing their license to be integrated in an already established board game. This trend is not new, as the company behind Monopoly cranks out an endless stream of licensed versions of its evergreen title, but license holders are also associating their brands with quality games. The Walking Dead has no shortage of original board games in its portfolio, but it’s also co-opted the excellent Bang!: The Dice Game. As goofy as the name sounds, Batman: Love Letter is great, too. Taking the core Love Letter game, it’s re-themed with Batman cards and tokens, which surprisingly works really well.

As someone who is still finding my footing in the board gaming space, it’s comforting to know that there are a lot of great options with licenses I recognize. Sure, not all licensed board games are good, but a growing number of them are, as publishers recognize that good board games generate more money and interest over a longer period of time than bad ones will. Video games might be a wasteland in terms of licensed titles, but licensed board games are really hitting their stride now. Before I close this out, let me highlight a few more licensed gems!

A Game of Thrones: The Board Game (Second Edition)

Don’t fret over the fact that it doesn’t look quite like the TV show. A Game of Thrones is specifically based on the books, which ultimately shouldn’t matter to a fan of the franchise in whatever form they consume it in. Each player will control one of the houses in Westeros and partake in a grand battle for the Iron Throne. Before I ever watched the show, I loved the game for its excellent blend of large-scale combat, resource management and negotiation. There’s no shortage of opportunities to be a backstabbing jerk, something that I’ve come to learn is par for the course with this franchise.

A Game of Thrones is a phenomenal game and one of my favourites. With that in mind, there are a few caveats I should warn perspective players about. One, the learning curve on this one is steep. It is one of the hardest games I’ve ever learned and one that I wouldn’t recommend for complete board game newbies. The other point worth noting is that this game takes a long time to play. Set aside at least four hours for setup, teaching and playing it through once. If you can check off both of those things, you’re going to have a blast with a game that’s true to the Game of Thrones experience.

Buy A Game of Thrones: The Board Game (Second Edition) Now From Amazon.com

The Dice Masters series by Wizkids is a competitive card and dice battling game that has a number of licenses associated with it, including Marvel, DC, Yu-Gi-Oh and Dungeons & Dragons with more on the way. Each player will form a team of eight characters and use them to attack the other player until only one mastermind is left standing. Once I got a hang of it, I really grew to love the flow of combat in this game, as there’s a lot of different ways you can approach a situation with the and cards you have. Furthermore, if you really want to get into the depth of team-building, booster packs can be bought to fill out your roster or complete the entire set.

I have no interest in Yu-Gi-Oh or Dungeons & Dragons, but I do have a few hundred cards and dice for Marvel and DC characters. It’s great that this game allows me to mix-and-match these rival comic universes in any way I want and have them partake in an epic battle.

Take part in epic dogfights with a series of signature spacecrafts with Star Wars: X-Wing Miniatures Game. Part of the game’s appeal are the incredible figures. Painted out-of-the-box, built to scale and intricately detailed, these phenomenal ships are hands-down the best board game pieces on the market today. These are so good that I would put these ships on display solely for decorative purposes.

More importantly, this is a great game. Using an innovative ruler system for movement and firing, the game plays just like how you’d imagine a Star Wars space battle would unfold. Since Fantasy Flight wants you to go out and buy more ships (of where there are a plethora), the core game is light ships and ultimately light on content. That said, after one play of the core game, it’ll be hard to resist buying up a whole fleet. 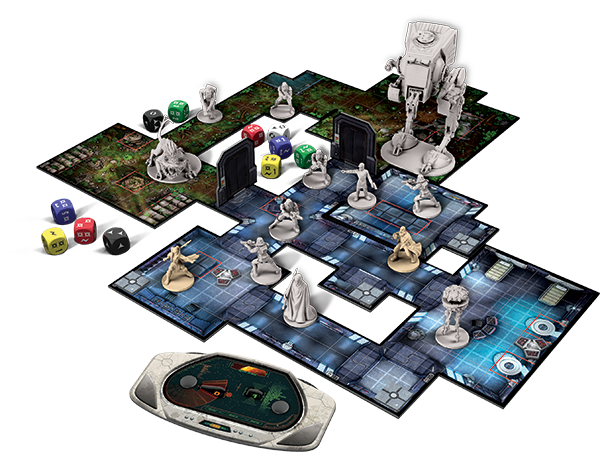 Another Star Wars game? If we’re going to talk about licensed games, I have to mention both of these juggernauts. Not just because they’re Star Wars, but because they’re some of the best licensed games in the business. In Imperial Assault, two-to-five players engage in a ground-based battle with Luke Skywalker, Darth Vader and more. You can either play it as a dungeon crawl campaign or a one-on-one Skirmish, which kind of makes it two amazing games in one. Either way you play it, you’re going to have to put in a higher level of commitment than most board games, but it’s so worth it.