T.I.M.E Stories puts you and your friends in charge of protecting the space time continuum. Easy as pie, right? You’ll do this by traveling to different periods in time where a disturbance is sensed and putting a stop to whomever is trying to muck with history.

The base game features one episode that takes place in a 1920s insane asylum. Other episodes can be purchased separately as expansions. While the replay of the base game will be an immediate flag for some – as there’s only about six hours of gameplay to be had before you’ve exhausted its replay value – does it do something within that time to make you buy into its vision?

The way that time travel works in the game is that your mind is transported into another body in that time period. You’ll get a series of characters to choose from, with each player taking on the role of one each. Each character is different, as they possess their share of strengths and weaknesses, thus making coordination that much more important. On the board, you’re represented by a pawn. 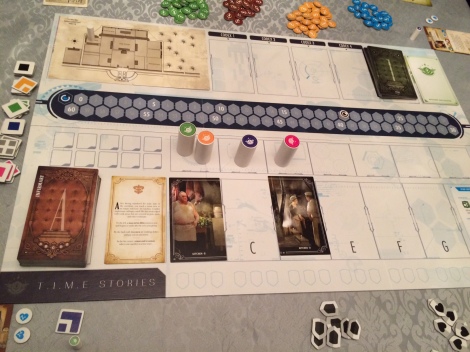 You’re then transported to the area you’re investigating. On the top left of the board is a map of the location you’re in. A marker is used to denote which room everyone is in. You can’t split off into separate rooms as the time traveling technology can’t support you splitting up. It’s a little goofy, but makes sense within the context of the game.

At the bottom is a track where each room is splayed out with a series of cards. The furthest left card is narrative that sets each scene, while the remaining cards create a beautiful panoramic image. Using your pawns, you’ll place them just above the segment of the image you want to investigate. As you explore each room, you’re going to unravel the mystery, find items that could help you further your quest and get into fights. It’s all very involved while keeping all players heavily invested in the action.

Be careful though, as you only have a limited amount of time to complete your mission before being forced back to the base. This is represented by the Temporal Unit track in the middle of the board. Each time your group performs an action, this ticks down by one. When you move to different rooms, it goes down by between one and three Temporal Units, based on a die roll. When time runs out, you can return, though it’ll be at the beginning of the stage with almost all items reset. With the knowledge you know from the first run, you should be able to get through faster, though there will be surprises right up until the end. 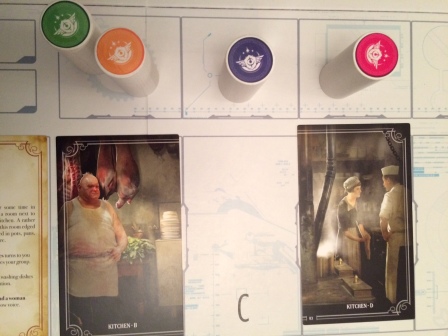 The overall structure of the game and how its events play out make T.I.M.E Stories feel like a classic adventure video game brought to life. Everyone was deeply engaged with the action, as every scene pushed the narrative forward, even if it drove us to a dead end. Some of those dead ends are maddening, as they can take a heavy hit on your Temporal Units, but that’s supposed to be part of the fun.

It also does a phenomenal job of forcing players to work as a team. For one, there can be benefits to having players spread out to cover as much of a room as possible, or benefits to grouping together to face specific areas of a room as a team. The narrative may give you an idea of what to focus on, but it’s up to your group to decide how to approach each location.

At times, your agility, negotiation skills and combat chops will be put to the test. These are resolved through dice rolls. Succeeding in a test usually leads to something great, while failing a test could end with death. At the very least, failing a test will lead to burning more Temporal Units than you’d like, as each roll ticks away at your available amount of time.

While there are mechanisms in place to prevent a single dice roll from winning or failing the game, you’re still at the mercy of the dice. Without going into spoilers, there are some key junctures where a hot hand can blaze through with ease, or other times when a slumping group can get trampled, leading to harsh consequences. Having to trust the luck of the dice in these moments might drive some people nuts, though I was alright with how things shook out in the end.

The big elephant in the room is still the matter of replay value. Yes, once you finish this game, which took our group about six hours, that’s it. Not to say that you couldn’t play it again, as it doesn’t require you to destroy any components like Pandemic Legacy. However, once you’ve seen all of the story content, you could blaze through the game much more quickly, as you’ll know the exact path to the end.

From a strictly economic point of view, you could buy a game of an equal price that has infinite replay value. T.I.M.E Stories won’t win that argument. However, T.I.M.E Stories compensates by being phenomenal at what its trying to do. Deeply engaging and exciting throughout, that might have been the best six hours of tabletop gaming I’ve ever been a part of. And with one full story already out (The Marcy Case) and two more on the way as expansions, the base game becomes a framework for what could be a large series of incredible board gaming experiences.

Say whatever you want about how the business model impacts this game’s replay value, the game you get in T.I.M.E Stories is world class. It actually benefits greatly from this one-and-done approach, as it allows the game to create a gripping gameplay experience that feels fresh from end-to-end without having to make concessions for the sake of replay value. With a support plan for expansions already in place, the base game becomes the start of potentially many more awesome board game experiences to come. Based on how incredible the base game was, sign me up for everything that T.I.M.E Stories has in store.