Over the course of seven games released outside of Japan, only one Fire Emblem title has failed to impress me. That dud is Fire Emblem: Shadow Dragon. Starring Marth, arguably better known now for his appearance in the Smash Bros. series, it was a remake of the first game in the series. Despite featuring updated graphics, its antiquated story and gameplay remained, leaving a lot to be desired for players who jumped on the bandwagon through more refined entries in the franchise.

The game revolves around Alm and Celica; childhood friends who find themselves caught in the middle of a war after they separate. Throughout the game, you will manage their respective armies as they fight for peace. If you’ve played a Fire Emblem game before, you’ll quickly spot many of the tropes that have comprised the majority of the franchise’s previous plots, but the characterization of Alm and Celica push it over the top.

As with every other Fire Emblem game, it’s a turn-based strategy title where you manage your armies against an opposing force. Over time, your units will grow stronger, though they’re gone forever if they die on the battlefield, should you play in Classic mode. Casual mode returns to abolish perma-death, which I personally would recommend playing with regardless of your skill level.

Since this is one of the oldest entries in the series, its systems are not nearly as refined as they are nowadays. Without the attack triangle, there’s less nuance when it comes to creating specific match-up advantages. Simply make sure your attack is better than theirs without putting yourself in a position where you’ll die on the next turn. Its presence is missed, but the core enjoyment of the combat is still there.

You also don’t get the modern relationship system. Instead, characters can have quick chats on the battlefield, though their impact on the game is largely inconsequential. Adjustments have also been made with how archers work, as they can now attack at point blank range, as well as having a longer shot range in general.

New to this game are the hidden object mini game and the third person dungeon crawling. In the former, you’ll move from place-to-place, talk to people, and pick up items strewn about. It’s your best way of recruiting new talent and getting supplies, but it’s ridiculous how much food you’ll pick up off the floor that you’ll be eating later. 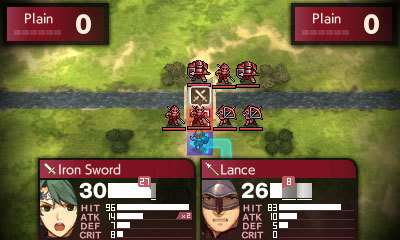 As for the latter, you’ll run around in caves and dungeons, triggering enemy encounters with the handful of enemies around. Neither of these added much to the experience, especially the dungeon crawling, as it mostly boiled down to breaking boxes and pots for items.

Where the game really falls apart for me is in its level design. Almost every level is just an open field with a handful of obstacles. There’s also little variety in the mission objectives, as almost all of them are to simply rout the enemy. The game ramps up the difficulty simply by exploiting certain enemy types that either spawn a myriad of new enemies to the map or witches that can teleport behind you and pick off your weakest units.

Fire Emblem Echoes: Shadows of Valentia isn’t the worst in the series, but not by much. Its age shows everywhere, from a simplified combat engine, to terrible level design, to new additions that attempt to pad out the game that don’t move the needle.